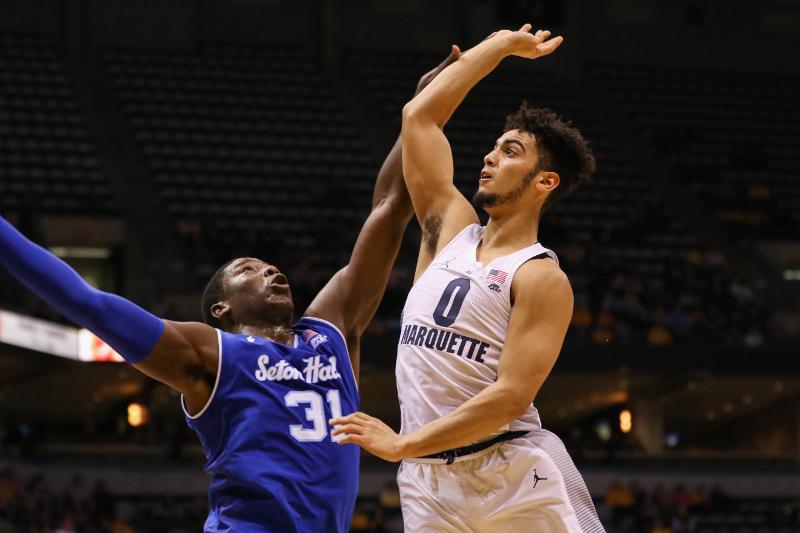 Marquette is on its worst run of the season, having lost four straight with a tough road game against BIG EAST foe Seton Hall ahead.

The Golden Eagles (13-10, 4-7 in BIG EAST) are looking to rebound after a National Marquette Day downer against Providence while the Pirates (17-6, 6-4 in BIG EAST) fell to Villanova last Sunday after keeping it close for most of the game.

Given Marquette’s recent form, this matchup is must-win territory. The Golden Eagles have slid out of most of the national media’s NCAA Tournament projections. A road win against an experienced Seton Hall team could reverse that trend.

MU NEEDS TO COME OUT WITH ENERGY, AGGRESSIVENESS
If the Golden Eagles are to complete the sweep against Seton Hall, they will have to come out fighting, much like they did when they beat the No. 13 Pirates, 84-64, nearly a month ago in the BMO Harris Bradley Center. Head coach Steve Wojciechowski cited his team’s youth as a reason for their inconsistency after the loss against Providence.

“We’re a lot younger than everybody else,” Wojo said. “We’re one of the youngest teams in the United States. I’m not going to make a big deal of it. But obviously I’ve got to do a great job coaching with all of this youth we’ve got. Because apparently I’m not.”

With their backs against the wall last season, Marquette managed to win four out of its last five games to sneak into the NCAA tournament as a No. 10 seed. A similar stretch is probably required to get the Golden Eagles back to the tournament. In order to match last year’s 10-8 conference record, Marquette needs to win six of its last seven regular season games.

BATTLE OF THE SENIORS
Marquette will square off against a pair of the conference’s best seniors in Seton Hall’s Angel Delgado and Desi Rodriguez. Delgado said after the last Marquette loss, “When they come here, they’re going to see the real Seton Hall.”

The Pirates will be just as formidable as ever as Rodriguez is averaging 17.4 points per game, the eighth-best mark in the conference. He put up 20 points and chipped in seven rebounds against No.1 Villanova on Sunday. Delgado is also averaging a double-double for the second season in a row.

Meanwhile, Marquette senior Andrew Rowsey has been on a cold streak. He hasn’t hit a 3-pointer in 121 minutes of game action, his longest drought of the year. He had a good game last time against Seton Hall, putting up 31 points and knocking down four 3-pointers.

LIMITING REBOUNDING
Considering how much more tenacious Delgado and Rodriguez have been on the boards than Marquette’s big men, the rebounding battle could be very different this time around. Seton Hall’s athleticism and length could prove a sizable challenge for the Golden Eagles as they mustered just 28 total rebounds, including three on the offensive end. Meanwhile, Delgado and Rodriguez grabbed five offensive boards against Villanova alone and the Pirates had 10 total.

Freshman Theo John could prove to be an effective counter to Seton Hall’s bigs. He had a breakout game against Providence, coming off the bench to record a career-high five blocks. He’ll have to play stout defense against Delgado and be aggressive about jamming the paint.

Marquette has a tendency to get in foul trouble early on. If Seton Hall relies on its frontcourt and John reverts to his old habit of leaning into shooters, it could be a long night for the Golden Eagles with lots of trips to the line for Seton Hall.