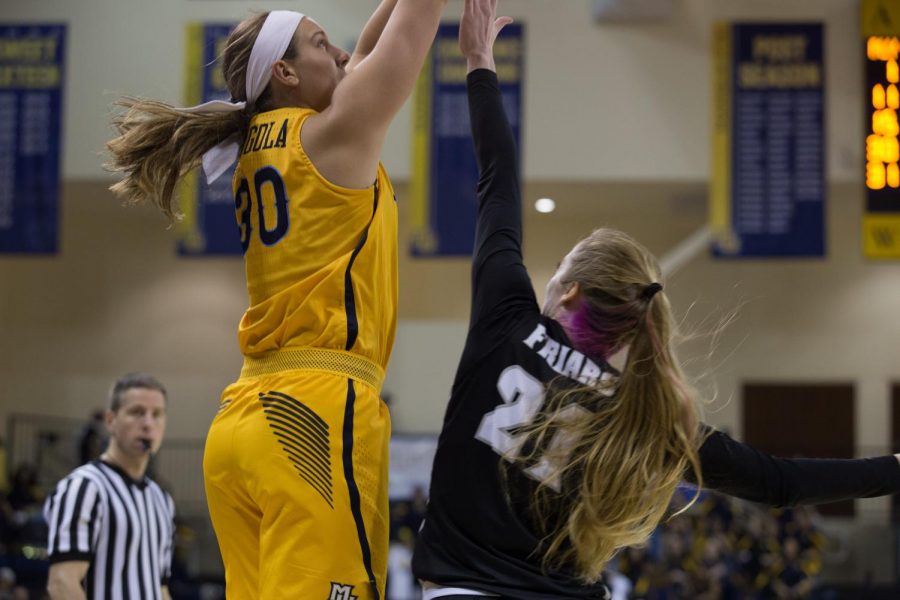 She then looked over to sophomore guard Isabelle Spingola, who entered play with a much more modest stat line — 4.4 points per game while shooting a team-best 38.1 percent from the perimeter. Kieger then gave the Chicago native a simple message.

“What’s different?” Kieger told Spingola during shootaround. “That could be you. You can shoot like she can.”

Spingola certainly got that message, scoring a career-high 28 points en route to Marquette’s 94-61 demolishment of Providence.

“Tonight she just had some confidence, she went out there and did her thing,” Kieger said. “When she hit a couple, it was over.”

That continued in the second half, as the Chicago native finished the night shooting 75 percent from the field, including 70 percent shooting from 3-point range. She did not miss a shot until the third quarter.

Her performance evoked emotions from the rest of the team. After she nailed a buzzer-beating shot before halftime, her teammates quickly rushed to her side at halfcourt to celebrate.

“That was my favorite moment of the game,” Kieger said. “They acted like she won the national championship, which was great. You want that chemistry.”

“That was great,” Spingola said. “I’ve never experienced something like that before. It just felt really good that all of my teammates were there to celebrate with me.”

Spingola’s night headlined one of Marquette’s best offensive showings in BIG EAST play. The Golden Eagles scored 1.31 points per possession while shooting an astronomical 61 percent from the field.

Junior shooting guard Blockton chipped in 20 points and six rebounds as well. It was her 21st 20-plus point performance this season. No other Marquette player besides Blockton and Spingola had more than 12 points.

“(Blockton) did a phenomonal job of coming back after that DePaul game,” Kieger said. “She really worked through some stuff that week and battled back and did what she was supposed to do.”

That offense was not always quite as efficient. Marquette had seven first quarter turnovers and could not expand its lead after starting the game with a 12-0 lead.

The constant double-digit lead led to subpar Marquette defense and Providence runs toward the end of each quarter. The Friars shot 62 percent in the third quarter and 53 percent in the fourth quarter.

“We were trying a little bit of a few different things,” Kieger said. “We were working on our zone, and I knew that was going to happen. We have to work through it. To be able to get better a defense, we have to play it.”

Marquette’s blowout win Friday is part of a two-game homestand. The Golden Eagles will look to win the back end against Creighton Sunday at 1 p.m. Central time.

Creighton is coming off a 77-67 loss to DePaul that snapped a three-game winning streak. The Bluejays entered play Friday as the third-best 3-point shooting team in the conference.

“Creighton is a really hard team to guard,” Kieger said. “They run their offense very well. They cut really efficiently … They’re balanced, and whenever a team is balanced offensively, it gives us trouble.”