On January 26, Connor said that there were nine confirmed cases of the “true blue flu.” 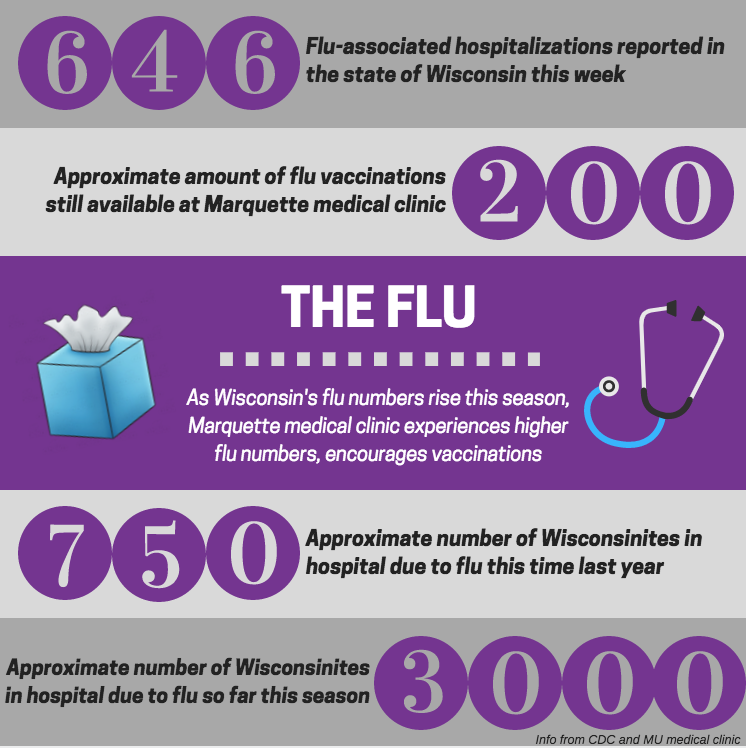 Sophia Carlton woke up to get ready for her day – but soon, she was overcome with dizziness. She felt nauseous and fatigued the previous day, but she brushed it off as a common cold. For the next week, Carlton’s body ached, her throat was sore and she was extremely congested.

Without knowing it, she had the flu.

Carlton, a junior in the College of Engineering, is one of many Americans, and Marquette students, who has been affected by the flu this season. According to the Center for Disease Control and Prevention, all 50 states have reported widespread outbreaks of the highly contagious disease. The CDC also reported that the entire state of Wisconsin is experiencing either high or moderate levels of the outbreak, with over 646 flu-associated hospitalizations reported this week.

As of Jan. 26, Connor said there were nine confirmed cases of the “true blue flu,” which refers to cases verified by the state to be influenza. This number is not unusual to Connor. However, the fact that there are so many cases so early in the season is highly unusual. A report by the CDC said that this time a year ago, less than 750 Wisconsinites had been hospitalized due to the flu. So far this season, over 3,000 have been hospitalized.

“It’s an oddity that all states are that high at this time of year,” Connor said in reference to the CDC’s report of national outbreaks.

Now, the clinics Connor coordinates vaccinate hundreds of Marquette students and faculty each time they’re organized. Connor attributes this increase to a general widespread awareness about the potential severity of the flu and to the fact that the university now absorbs the cost of the vaccine, making it free for all undergraduate students. Thus far, Connor estimates that a little over 2,000 students have been vaccinated.

“We have a lot more students who get (flu vaccinations) now that they don’t have to pay $25,” Connor said.

The clinic has approximately 200 vaccinations left and Connor urges students to get their flu shots as soon as possible. Because pharmaceutical companies have run out of the vaccine, no more will be ordered once Marquette’s supply is depleted.

“We consider ourselves fortunate that we still have enough supply left for students that need it,” Connor said.

It’s mandatory for nursing and dental students and faculty to be vaccinated, but not other members of the Marquette community.

“I’d love to see it be mandatory, but I don’t think that’ll ever come to be,” Connor said. Connor said that immunizing a  critical percentage of students from the flu could significantly diminish the chance of a widespread outbreak and decrease illness on campus overall.

Genevieve Lutz, a junior in the College of Nursing, also emphasized the importance of getting vaccinated. Lutz said she is trained to take the flu and other health issues seriously but recognizes that it isn’t a top priority for all students.

“The flu can be very serious and result in long hospitalizations and very serious complications, but by getting the vaccine, someone would be more likely to just get more minor symptoms,” Lutz said in an email.

While Connor said the number one flu-preventer is the flu shot, she also suggests students get rest, drink fluids, find ways to de-stress and stay away from people who are contagious. Carlton — who got a flu vaccine — attributes her illness to being around contagious people.

“I’m realizing now that I had been in contact with quite a few people who were sick,” Carlton said.