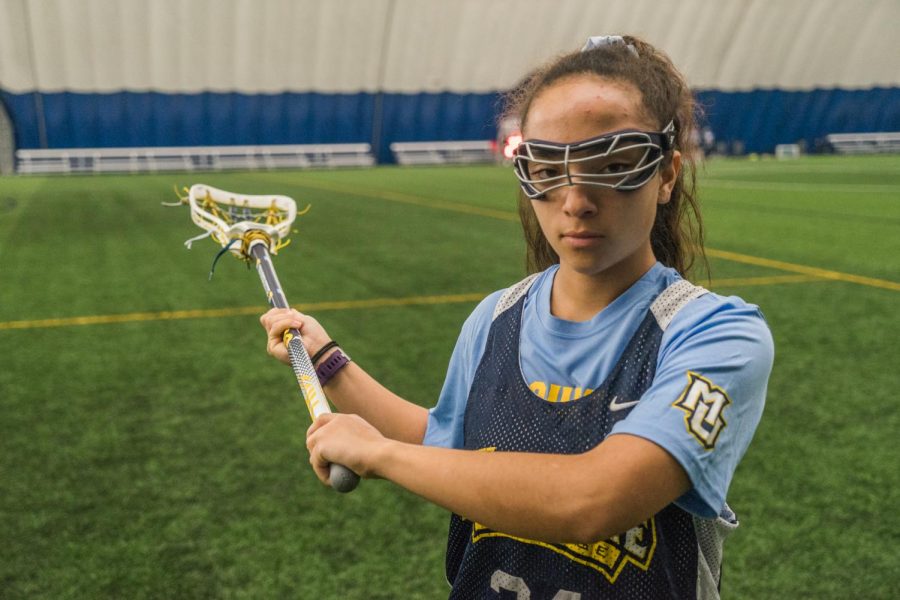 Polk is the first women's lacrosse player at Marquette from the state of Wisconsin.

It took seven years of women’s lacrosse at Marquette for the team to get its first Wisconsin recruit. Despite fielding 40-woman teams for each of those seasons, no Golden Eagle lacrosse player came from the state until Nia Polk.

Polk, a freshman defender from Pleasant Prairie, Wisconsin, about 40 minutes south of Milwaukee, passed up offers from Division II school East Stroudsburg in Pennsylvania and Northern Michigan to attend Marquette. According to Polk, the culture and welcoming team dynamic were driving forces in the decision-making process.

“Everyone is super welcoming, and we know how to play around with each other but then get down to business at practice and get stuff done,” Polk said.

Polk first picked up a lacrosse stick during spring of eighth grade, far later than her teammates, most of whom started in elementary school. “I always said I wasn’t very athletic when I was younger, but I guess lacrosse is what showed me that I was,” Polk said.

Growing up with four brothers taught her to roll with the punches and compete against more polished competition. Polk is far from the only athlete in her family. Her older brother Chris was a running back at the University of Washington before playing in the NFL for three years as a backup on the Philadelphia Eagles and the Houston Texans. Watching Chris transition from high school to college to the pros “lit a fire” under Polk.

“It made me want to play at the highest level I could,” Polk said. “He taught me that you can work hard for anything you want in life.”

Polk also has learned from her on-field family at Marquette. On the field, Polk said she looks up to senior defender Alex “Gamby” Gambacorta because of how she leads by example and provides constructive feedback to underclassmen. With Gambacorta’s feedback, Polk set goals for the upcoming season: “Have fun with everything, learn to adapt to this new environment and hopefully win the BIG EAST Tournament.”

Polk hopes to be a leader in her freshman class, too. “I think coming in as a freshman, obviously it’s hard to jump into a leadership role right away,” Polk said. “Just doing everything coach asks of me and trying to do up and above, and kind of I guess leading by example for right now. Then once I get older, having that voice to direct people more.”

Head coach Meredith Black sees some of those leadership qualities in Polk. “She’s a hustler, she works hard and will challenge herself and her teammates,” Black said.

Black hopes to make the BIG EAST Tournament for the first time in program history, and she’ll need contributions from first-time players like Polk to do it.