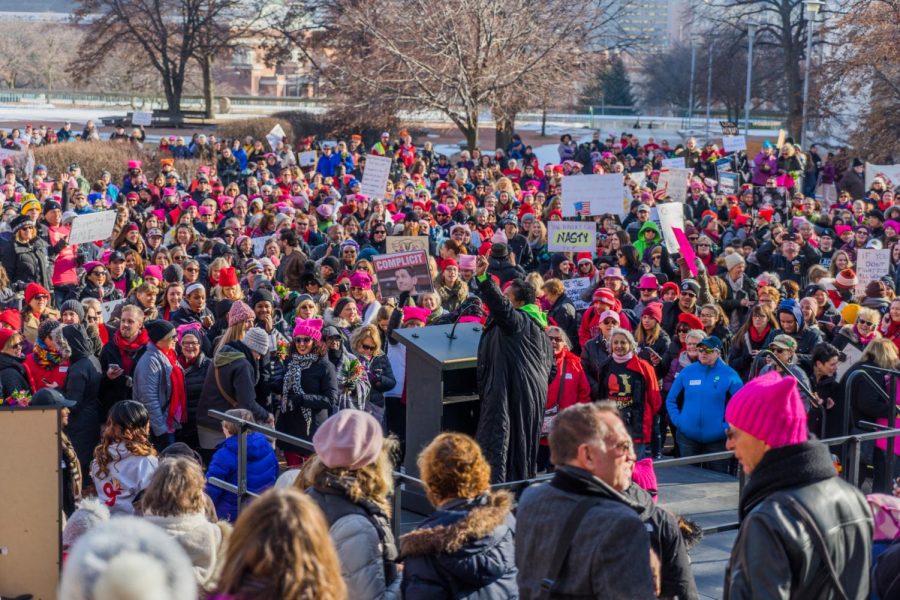 Prior to the march from the courthouse to the Wisconsin center, attendees listened to numerous speakers.

With handmade posters held high above their heads with phrases like “Times up” and “I’m with her,” about 1,500 women, men and children gathered in the cold on the front lawn of the Milwaukee County Courthouse Saturday morning. With each passing moment, the crowd grew more and more impassioned, screaming “take it back” as their battle cry.

The mission of this year’s Women’s March was to bring together the political power of diverse women to spur social change, said Sarah Pearson, an organizer of the march.

The first Women’s March took place following the inauguration of President Donald Trump. It occurred after a tape was released of him talking to Access Hollywood’s Billy Bush about being able to do anything to women because he was a “star.”

Among this year’s crowd were many Marquette community members. Carolyn Lewis, a senior in the College of Communication, said she attended the march to ensure her voice was heard.

Maria Bunczak, a junior in the College of Nursing, attended the march to be in solidarity with other women.

“I’m here to march for the rights of women everywhere, those who are underrepresented in our government right now,” Bunczak said.

Also in the crowd was Marquette alum Jeffrey Szczewski. Szczewski earned his undergraduate degree at Marquette in 2007 and his law degree in 2010.

“I do what I can to be an ally. My Marquette education helped me to understand social justice issues, and it’s a big part of why I’m a defense attorney here in Milwaukee,” Szczewski said.

The marchers in Milwaukee were not alone in their efforts. Similar events took place in cities across America the same day. Katie Zalabak, a junior in the College of Education, attended Saturday’s events in Milwaukee while her family members attended in Chicago.

“It’s incredibly powerful that there are so many cities doing this. I think it’s so cool that we can all unite over something that’s so powerful and so important right now,” Zalabak said.

Prior to the symbolic march from the courthouse to the Wisconsin Center, attendees listened to speakers ranging from State Senator Lena C. Taylor to eighth grader Zion Rogers. Their messages focused on topics such as voting, immigration reform and the need for young people and minorities to have their voices heard.

“(Young people) need to make their voices heard … they matter,” Taylor said. “The young generation of voting is in the top of turnouts. When they show up, they help to determine who the candidate will be, who the person in power will be. They should not be silent.”

Throughout the rally, speakers emphasized the work to be done after the streets cleared and the signs went down.

“If we don’t speak up for us, who’s going to speak up for us? If you don’t show up, who’s gonna (sic) speak to your issues?” Taylor said. “Show up, show out, run for office, volunteer, give your time.”