Women’s basketball bounces back against Villanova 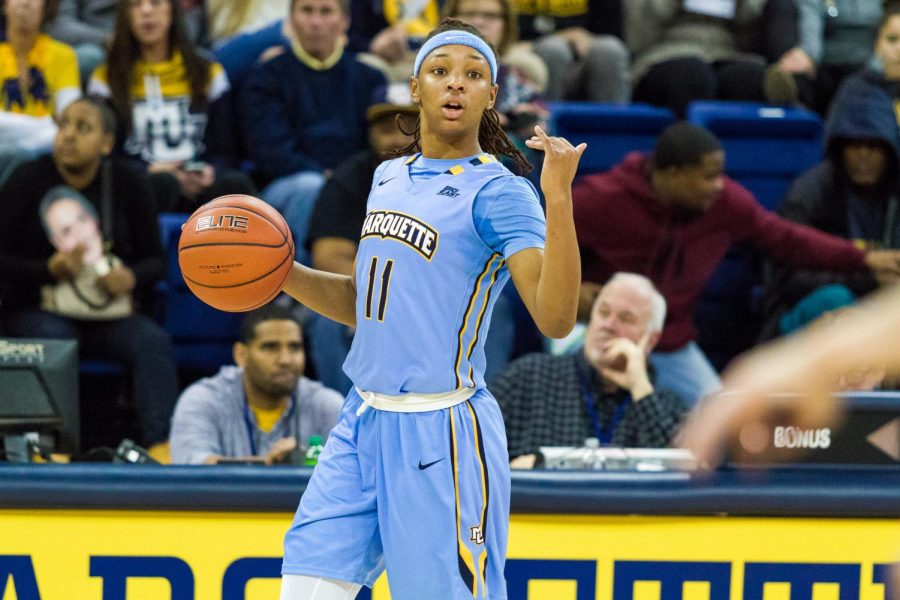 About 36 hours after their biggest loss of the season, the Golden Eagles were able to bounce back with a convincing 67-57 victory over Villanova on the road.

“This win is huge,” said junior forward Erika Davenport. “We were down after Georgetown. We had to respond from that game so this win feels great.”

Villanova commits the fewest turnovers per game in the NCAA at just 9,4, but Marquette didn’t get the memo. The Golden Eagles’ defensive pressure forced Villanova to commit eight turnovers in the first quarter alone and turned those into 12 points.

The strong start gave Marquette a 22-15 lead at the end of the first quarter, a lead that the team would not relinquish for the remainder of the game.

After going just five of 26 from 3-point range against Georgetown, the Golden Eagles made an effort to attack inside, scoring 46 of their 67 points either in the paint or at the charity stripe.

Davenport recorded her sixth double-double of the season with 22 points and 12 rebounds. The junior forward also connected on a shot from beyond the arc in the third quarter, the first three point field goal in Davenport’s Marquette career.

“I just tried to be aggressive and score when I was out there,” said Davenport. “I credit my teammates for getting me the ball in good positions.”

Junior guard Allazia Blockton, who was named BIG EAST Player of the Week last week after her late-game heroics against Butler, scored a game-high 23 points.

All of Marquette’s points came from the starting lineup. Each of the starters played over 30 minutes. It was also slow-paced game, as Marquette recorded just two fast-break points while Villanova recorded none.

Head Coach Carolyn Kieger was pleased with the victory despite her usual preference for pushing the tempo. She said the win proved her team could “win in different ways.”

Marquette (14-6, 8-1 BIG EAST) still remains atop the conference standings. The Golden Eagles will have a week with no games as they prepare to enter the latter half of conference play. They will next take the court Monday, Jan. 29 on the road against Depaul (14-6, 6-2 BIG EAST).