Hamilton to come to Milwaukee in 2019 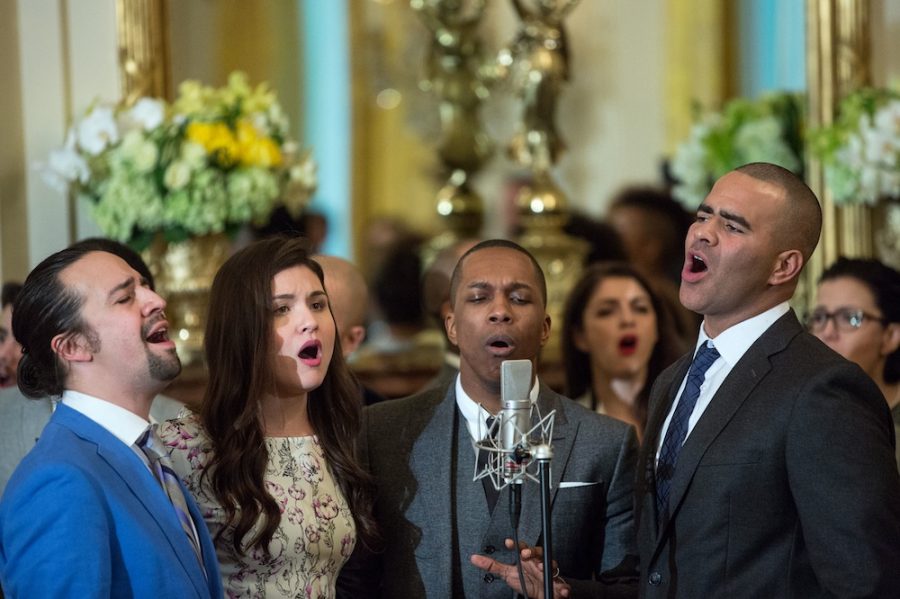 Cast members from "Hamilton" engage in a group song at the White House.

It didn’t take long for Lin-Manuel Miranda’s Hamilton to sweep across the nation. And luckily for Wisconsin residents, the Broadway smash has finally made its way up from Chicago and into the Badger State.

With the recent announcement that a National Tour of the hit musical will feature shows in both Milwaukee’s Marcus Center and Madison’s Overture Center, Hamilton fans at Marquette are closely watching the Marcus’ box office for more information.

Skylar Clark, a self-declared “extreme fan” and a sophomore in the College of Health Sciences, shared her excitement about this announcement. “This musical is my favorite ever that I have seen, and I always follow announcements of it,” Clark said. “So when I found out that it is coming in the future so close to where I live, I was so excited.”

Clark is patiently waiting for the official dates to come out for 2019, planning to identify the shows she could make it to and then grab a ticket early. “As soon as the dates come out I’m going to try to get a ticket,” Clark said. “I know it is so popular, so they are gonna sell out super fast. Plus, I’m hoping that the earlier I try to get a ticket the less expensive it will be.”

Hamilton’s combination of rap and hip-hop with traditional musical stylings as well as the intriguing biographical narrative about the life of founding father Alexander Hamilton has indeed captured the interest of fans and investors across the country. Based on Ron Chernow’s 2004 biography about the Revolutionary War hero and first U.S. Secretary of the Treasury, Hamilton exhibits the skills of Lin-Manuel Miranda as a composer, lyricist, playwright and actor as he brought Alexander Hamilton’s fascinating and even controversial life story into the public eye.

The musical achieved both critical acclaim and box office success, being commended for its choice to cast non-white actors as historical figures and the incorporation of contemporary cultural techniques into the stories many Americans see as “all too familiar.”

So what can an excited fan or curious show-goer do to solidify tickets at a Milwaukee show? As of now, the Marcus Center hasn’t released many details about Hamilton prices or dates. Yet that hasn’t stopped Marquette students from jubilant anticipation.

For Shannon O’Brien, a freshman in the College of Arts & Sciences, the show is something that brings her whole family together.

“My family and I saw Hamilton when it came to Chicago and absolutely loved it,” O’Brien said. “So when I told them that the musical would also be coming to Milwaukee in the future, they freaked out with me!” Like Clark, O’Brien said she is also patiently waiting for the tour dates to come out and will be jumping at the opportunity to obtain tickets for her and her family.

Joe Geisen, a sophomore in the College of Business Administration, will also be watching the box office for tickets for him and his family. “My family has been wanting to see Hamilton for a long time, so they figured that they would take advantage of it coming to Milwaukee so they could see it with me as well as visit me at school at the same time,” Geisen said.

The show is bound to attract not only relatives of Marquette students but viewers from all over to the Marcus Center during the 2019-2020 Broadway season. Excitement is high, and it will only be a matter of time before tickets to the hit musical are making waves and selling out. Anyone looking to get a ticket should be on the lookout if they hope to be satisfied in the room where it happens.