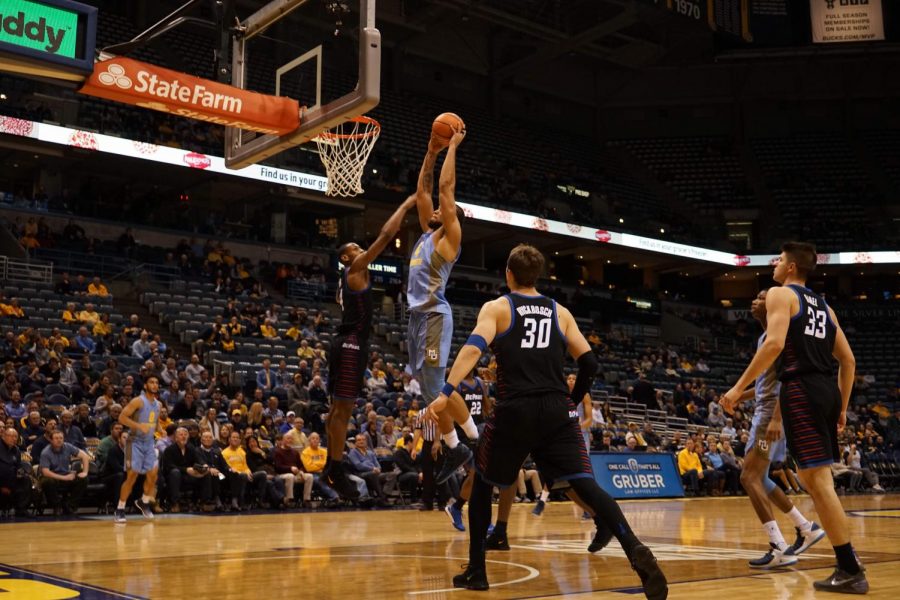 In a thoroughly dominating performance from Marquette (13-6, 4-3 in the BIG EAST) cruised to a victory over DePaul (8-10, 1-5) to get back over .500 in the BIG EAST.
DEPAUL MISSED EVERYTHING
You know it’s bad when a team shoots 41.2 percent in the second half and it’s considered a massive improvement.

Marquette’s stingy defense can be credited for a large portion of DePaul’s 29.9 field goal percentage in a 70-52 victory for the Golden Eagles. Not everything was perfect – allowing 17 offensive rebounds on 47 Blue Demons misses is nobody’s idea of great defensive box outs – but the Golden Eagles were more than satisfactory to stifle DePaul’s limp attack.

“The first thing about defense is commitment and care,” Marquette head coach Steve Wojciechowski said. “I thought our guys showed great commitment and care to get good stops and execute the game plan, neither of which we did against an outstanding Butler team a game before.”

There was a stretch from 12:59 to 4:28 in the first half where the Blue Demons were held without a single field goal. The Golden Eagles repeatedly forced DePaul into poor shot selection, which exacerbated their cold streak even further. Leading scorer Max Strus, who came in averaging over 18 points per game, finished with only 10.

“Our guys were really locked in on the defensive end tonight,” Wojo said.

YOUNG GUNS CONTRIBUTE
With sophomore scorer Markus Howard battling an illness and senior Andrew Rowsey shooting just 2-of-12 from the floor, Marquette needed to get production out of several secondary scoring options.

That’s just what happened. Freshman big man Theo John scored a career-high 11 points on four of six shooting and also went three of four from the foul line, where he shot only 31.6 percent coming into the game.

Jamal Cain also pitched in. The freshman from Pontiac, Michigan scored eight points, grabbed seven rebounds and played some of his best defense of the year.

“Those young guys are a lot more comfortable at home than they are on the road,” Wojo said.

With all three eligible freshmen – Cain, John and guard Greg Elliott – playing over 12 minutes per game, it can be easy to forget that they’re still first-year players. Wojo, who sees them in practice every day, is still sensitive to that fact.

“I don’t forget they’re freshmen,” Wojo said. “I think sometimes because they play a lot as freshmen, people forget it’s their first rodeo.”

FROLING GROWS MORE COMFORTABLE
Redshirt sophomore Harry Froling has been struggling since becoming eligible at the end of non-conference play. Froling’s scoring stroke returned a little bit – he scored six points on three of four shooting – but he truly shined on the boards, grabbing nine rebounds.

“That’s something that’s expected of me,” Froling said. “I like to rebound the ball and I think that’s one of the things I can control. You can’t always control if your shot goes in or not, but I can control rebounding and how hard I play.”

“I thought Harry’s rebounding in the first half was a shot in the arm and allowed us to get some separation,” Wojo said.

The quality of Froling’s passing doesn’t show up on the box score. His two assists don’t include several high post passes that led to missed open shots.

Harry also got a fun surprise in the postgame press conference when he heard for the first time that his brother Sam, a three-star wing also from Townsville, Australia in the class of 2018, committed to in-conference rival Creighton.

“That’s pretty cool, getting to play against him,” Froling said. “It’s good for him, I’m excited for him and it will be good to add that to the rivalry.”

QUOTE OF THE NIGHT
“No.” – Wojo, on whether he would ever wear a live microphone during a game.

STAT OF THE NIGHT
The last time Marquette allowed fewer than 52 points to a conference opponent was March 7, 2015, also against DePaul.

NEXT UP
Marquette will get more than a week to rest before its next game in Cincinnati against No. 10 Xavier Jan. 24.