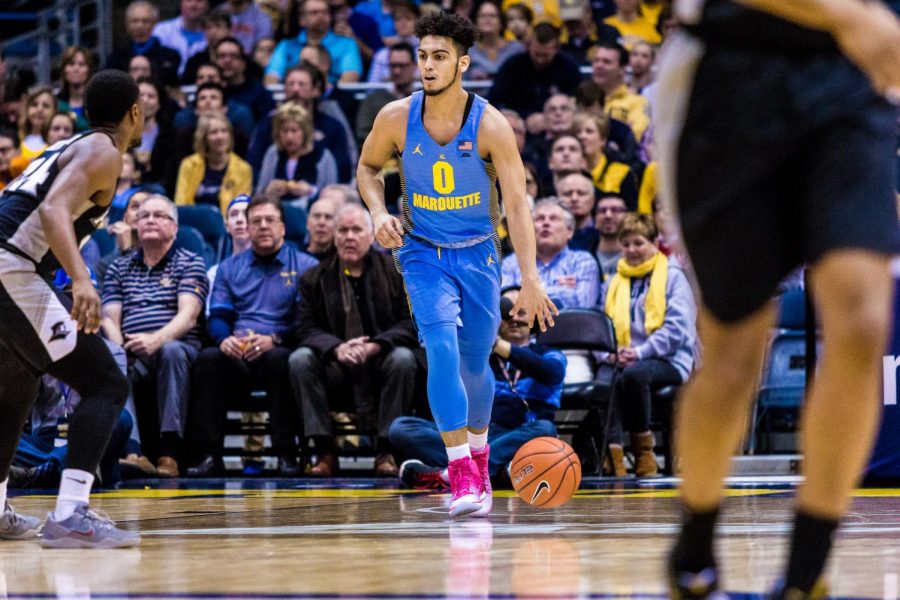 Few players in the BIG EAST have the chance to score 30-plus points on a regular basis.

Marquette has two of them: sophomore Markus Howard and senior Andrew Rowsey.

“When you’re playing any good offensive team, what you really fear is a guy that can single-handedly take over the game,” Villanova head coach Jay Wright said about the two guards. “There are a lot of guys that can put up good numbers and are efficient, but they might not have the mentality to just take over the game.”

The two guards, both shorter than 6 feet, have scored at will through Marquette’s first six BIG EAST contests. Howard’s 22.3 points per game and Rowsey’s 21.3 points per game rank first and second in the conference. No other school has multiple players in the top 10 entering Monday’s contests.

Howard did that against Cooley’s Friars Jan. 3, scoring 52 points in the overtime victory on a pristine 17-for-29 shooting from the field and 11-for-19 shooting the from 3-point range.

“Give him credit,” Cooley said. “He had a day, and we weren’t able to control him.”

“They’ve got tremendous contributions from their backcourt,” Leitao said of Marquette. “Between Howard and Rowsey, I’m not sure that there is a better pair of offensive guards in America in terms of productivity.”

While coaches may let their guard players sag off other guards in the conference on defense, Howard and Rowsey’s sharpshooting abilities force opponents to tailor their gameplans to the duo.

“What makes (Howard) effective is he doesn’t miss a ton,” Jordan said. “A lot of players, really good players, when you miss an assignment or you’re not there on arrival with the ball, they may miss a shot here or there.”

Jordan finds Howard especially dangerous off screens and cuts, helping him find open opportunities. “When he is open, he doesn’t miss and the ball goes in,” Jordan said.

The duo has combined to take the majority of Marquette’s shots, masking many of the Golden Eagles’ flaws in the paint. Marquette entered Monday having been outscored down low in all six BIG EAST contests.

Howard has been trying to change that; when he has an off-night, he tries to set up his teammates more instead of taking forced shots.

“When one of them is not scoring, there’s other ways to contribute,” Wojo said after the team’s win over No. 13 Seton Hall. “Obviously Seton Hall did a great job on Markus, but Markus still played a really good floor game.”

Either Howard or Rowsey has scored 30-plus points in five of Marquette’s first six BIG EAST games.

“What makes Markus really good is he has Rowsey also, who doesn’t miss much,” Jordan said. “You can’t leave them open.”

The Howard-Rowsey offense has not always worked perfectly. LaVall Jordan and the Bulldogs neutralized Howard for much of last Friday’s game, keeping him off the scoreboard until the 16:54 mark in the second half.

“It was just chasing them off the 3-point line,” Butler guard Kamar Baldwin said. “Make them take contested threes.”

Howard used his driving instincts and floater to finish with 14 points, but it was too little, too late against a Butler team coming off of a three-game losing streak.

Still, Marquette expects those games to be the exception and not the rule moving forward.

“Both of those kids are terrific players,” Wojo said after the Seton Hall win. “It’s not often that you have two guys that are capable of scoring 30 on the same team. It’s tough to take both those guys out of a game.”