Men’s Hockey looks to get semester started on right foot 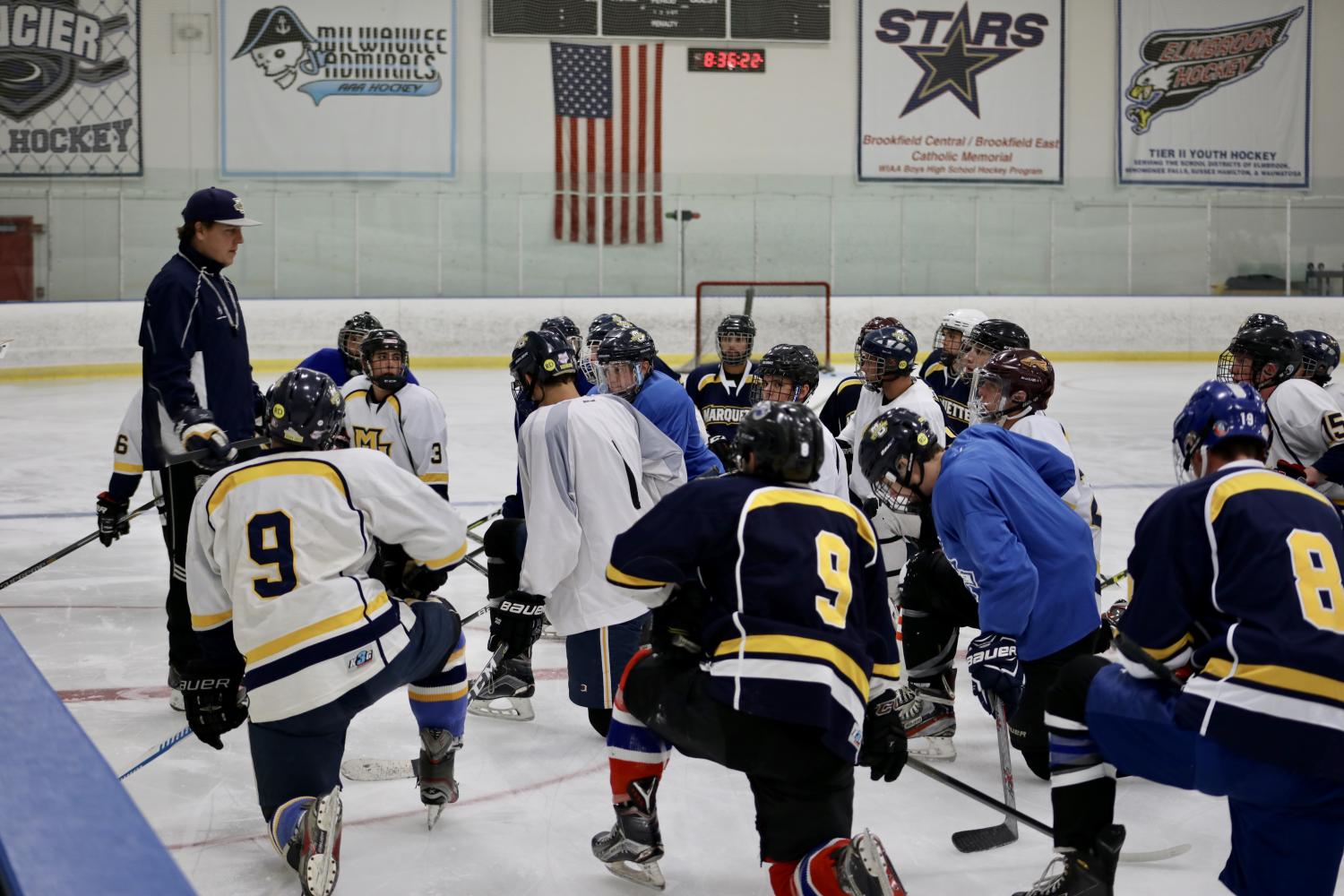 The Marquette men’s hockey team ended last semester on a high note with a three-game winning streak and are hoping to keep the momentum.

Back in December, Marquette swept Northern Michigan University, beating them 9-2 in its first game and 9-3 in its second game. After six weeks off for the holidays, Marquette is anxious to get back on the ice and compete.

The Golden Eagles (10-7-1) are currently ranked 20th in the Central division of the American Club Hockey Association rankings, and are tied in third place in the Northern Collegiate Hockey League with St. Mary’s. Aurora University is in first place and in-state foe Marian University is in second.

Marquette enters its final four games of the season with a chance to finish in the top three of the conference in its first season at the club Division II level.

Before handling the last place Wildcats, Marquette lost five straight games dating back to October, when they tied the University of Wisconsin-Madison. The stretch of losses included a 7-3 setback to 7th-place Robert Morris University. However, Marquette was able to beat Robert Morris in the next game, salvaging a series split and spurring a three-game winning streak to end the semester.

“We were kind of going through a rough patch, and we really turned it around,” team captain Brian Kennedy said. “Winning that second Robert Morris game really carried over.”

Head coach Will Jurgensen was anxious to see his team break out of the slump.

“Friday was just an indication that we needed some new life and we carried that with us against Northern Michigan,” he said. “We just had to get back to the basics and playing full hockey games.”

With four weeks of no official practice, the Golden Eagles are hoping to find the same chemistry that has gotten them on the three game winning streak.

“On the ice, I’ll try and reiterate the fact of where we are and where we want to be,” Kennedy said. “We need to practice hard and skate hard and do the little things that will carry over into the game.”

Junior forward Connor Coyne is tied for eighth in the conference with 25 points. Coyne is followed by teammates Michael Desalvo at 22 and Kennedy at 21. All that scoring will only carry them so far, though.

“We’re going to have to win them all and to (make the conference tournament), we need to tighten up our defensive zone,” freshman Adam Romanski said. “We get exposed too often and we got to put pucks in the net.”

A scheduling conflict cancelled the Golden Eagles’ game against the Milwaukee School of Engineering for this weekend. As a result, Marquette will have an extra week of practice before its conference matchup against St. Mary’s Jan. 26 at 7:30 p.m. for senior night at the Ponds of Brookfield.

Jurgensen is telling his team to keep it simple and focus on the fundamentals going forward.

“We’re going to leave it all on the ice and take it game by game.”