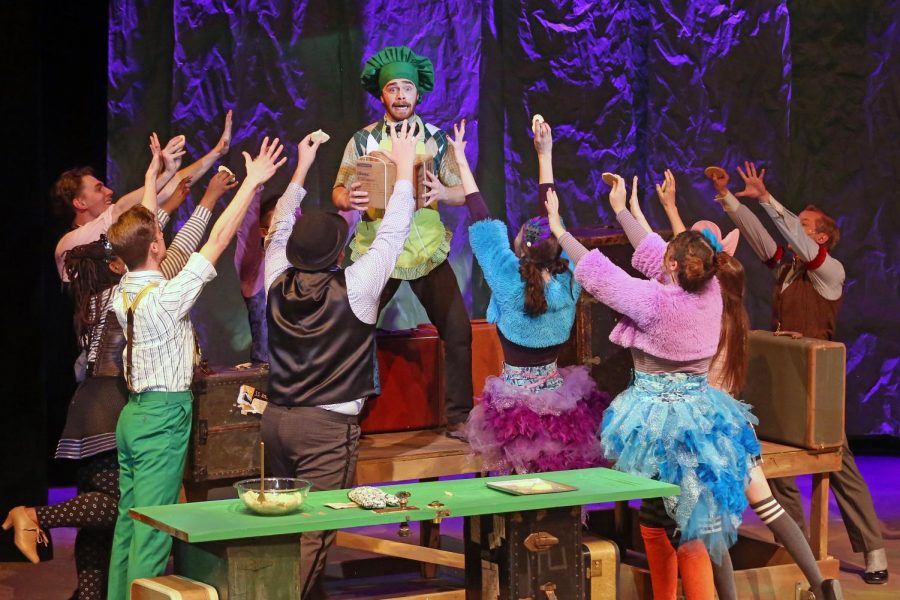 Emily Dever/Center for Teaching and Learning

MU Theatre performs the song "Cookies," from the musical "A Year with Frog and Toad."

Marquette Theatre’s annual Theatre for Young Audiences kicks off the semester with A Year with Frog and Toad, a tale of a cheerful, put-together Frog and a cranky, scatter-brained Toad.

Inspired by Arnold Lobel’s classic children’s stories, the musical features playful antics, thoughtful moments, and a multitude of fun songs, to tell a story of a unique friendship.

“It’s one of the purest things I’ve ever seen in my life… it’s all about friendship,” stage manager Caitlyn Birmingham, a sophomore in the College of Communication, explained.

But putting the show together has been no small feat. Rehearsals began around Halloween, and the cast rehearsed for about five hours a day for over a month.

However, the biggest challenge was the month-long rehearsal hiatus over winter break. The cast was worried they’d forget most of the script, songs and dance numbers, but luckily it took just a couple of rehearsals to get everyone back into the swing of things.

The set was a little less traditional.

The final product features set pieces made up of suitcases and trunks, formed together by members of the ensemble. Will Knox, a freshman in the College of Communication, who plays a bird as well as Father Frog in the show, explained, for example, that the ensemble sets up suitcases and trunks in the layout of a kitchen when Toad bakes cookies, and a living room area when Frog tells a scary story. With the costuming and unique set, cast members described a sort of steampunk feel to the show.

Originally, the director’s inspiration was a traveling troupe of actors, Birmingham explained. But this show ads a creative twist to the classic storybook tale. While the show is mainly meant for young audiences, it can be enjoyed by everyone.

“This is a show for all ages, so a bunch of people will take different things away,” said Eric Rorholm, a freshman in the College of Communication, who plays Lizard, amongst other ensemble roles. “The kids sort of see Frog and Toad as their friends, and when they grow up another year it’s really fun… but older people can really see the relationship build between them. There’s a maturity about the show.”

The cast has already had the chance to perform the show for an audience of children from Milwaukee-area schools, a group the cast described as reactive and fun.

“It’s an absolute blast,” Kevin Brauer, a junior in the College of Business Administration said. “They’re young kids, they have great energy, they have honest reactions, which is a blast to work with…”

Brauer, who plays the role of Toad, attributes the awesome show and audience to the Duffey family, who have been big supporters of Marquette’s Theatre for Young Audiences productions.

So whether you’re young or old, there’s no better way to begin the new year than with a heartwarming tale of a year of blossoming friendship. “A Year With Frog and Toad” runs at the Helfaer Theatre on weekends for the rest of the month.