Blockton beats the buzzer to lift women’s basketball over Butler 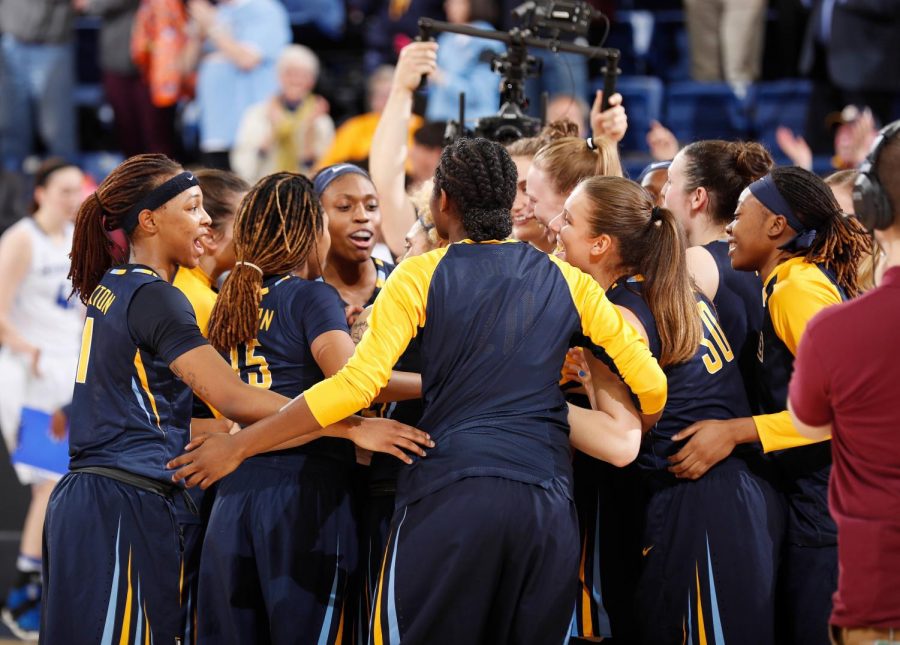 Marquette has a 14-game home winning streak after a close victory over Butler. (Photo by Maggie Bean and courtesy of Marquette Athletics.)

With the score tied at 67 and just 0.8 seconds remaining in regulation, Marquette was inbounding underneath Butler’s basket for a chance to win the game.

“I was praying to Jesus because I didn’t want to go to overtime,” said Blockton.

Blockton moved toward the foul line from the right elbow then made a cut the other way to the low post to create space from her defender.

“I faked like I was coming off of a curl and she bit,“ said Blockton ”As soon as I caught it I knew it she was either going to foul me or it was going in. I knew we had it once she bit for that fake.”

Blockton caught the inbound pass from fellow junior Natisha Heideman, went up strong and converted the layup as time expired to give Marquette the win while scoring a game-high 25 points in the process.

Before the final play, Marquette found themselves trailing 67-63 with under a minute to go. Two consecutive stops and a pair of mid-range jumpers from point guard Danielle King and  Blockton gave Marquette the final possession and set up the game-winning shot.

It didn’t happen without some controversy, though.

King launched a three pointer with 4.2 seconds remaining and two seconds left on the shot clock. The shot was offline and Butler’s Tori Schickel grabbed the rebound.

As the ball clanked off the rim, the shot clock buzzer sounded, but Shickel reacted as if the final buzzer went off. Not realizing there was still time on the clock, she committed a traveling violation.

After an official review, it was determined that Marquette would get possession with 0.8 seconds left, which provided the opportunity for Blockton to be the hero.

Senior Shantelle Valentine saw 13 minutes of action and came up big on the defensive end down the stretch, drawing three charges in the fourth quarter. This was the first time Valentine has taken the court since November 28th due to injuries.

“She gets the game ball,” said Kieger. “Obviously the play at the end was phenomenal but if she doesn’t take those three charges, it is a whole different ball game.”

Kieger believes having Valentine back will be a major boost for the team.

“That kid is phenomenal,” Kieger said. “To be able to have her presence is going to be huge for us moving forward.”

One reason for Valentine’s increased minutes was junior Erika Davenport’s leg injury, which she suffered midway through the second quarter. She went over a row of chairs and crashed hard into the bleachers while pursuing a loose ball, prompting nearby members of the crowd to wave Marquette’s training staff over. Davenport was eventually carried to the locker room and the severity of her injury is not known at this time.

Davenport is just 14 points shy of becoming the 27th player in program history to score 1000 career points. She is averaging 11.8 points per game and just over 7.9 rebounds per game.

Marquette held a 15-point lead at the time of Davenport’s injury, which was their largest lead of the game.

Trailing 55-45 late in the third quarter, Butler sparked a 13-1 scoring run that went into the early part of the fourth quarter. The run gave the Bulldogs a 58-56 advantage, their first lead since the first quarter. They held on to that lead until Blockton’s layup at the very end.

Other notable performances from the game include King, who scored 12 points, dished out a game-high six assists, and snatched three steals.

Marquette sophomore Isabelle Spingola also contributed, scoring 11 points off the bench. She nailed three of four shots from beyond the arc, including one early in the fourth quarter that ended a four-minute stretch without a field goal.

“I’m really proud of our handling of adversity,” Kieger said. “It wasn’t pretty, we didn’t play our best basketball, but that’s a sign of maturity that we can pull out those close games.”

“They are really handling late game situations at a high level,” Kieger said. “That’s the sign of a good team. I told my team, though, the sign of a great team is that you don’t even put yourself in that situation.”

Marquette (12-5) returns to action Sunday against the Xavier Musketeers (8-9, 1-5 BIG EAST). Tipoff is set for two p.m. Central time and the game will be televised on the BIG EAST Digital Network.