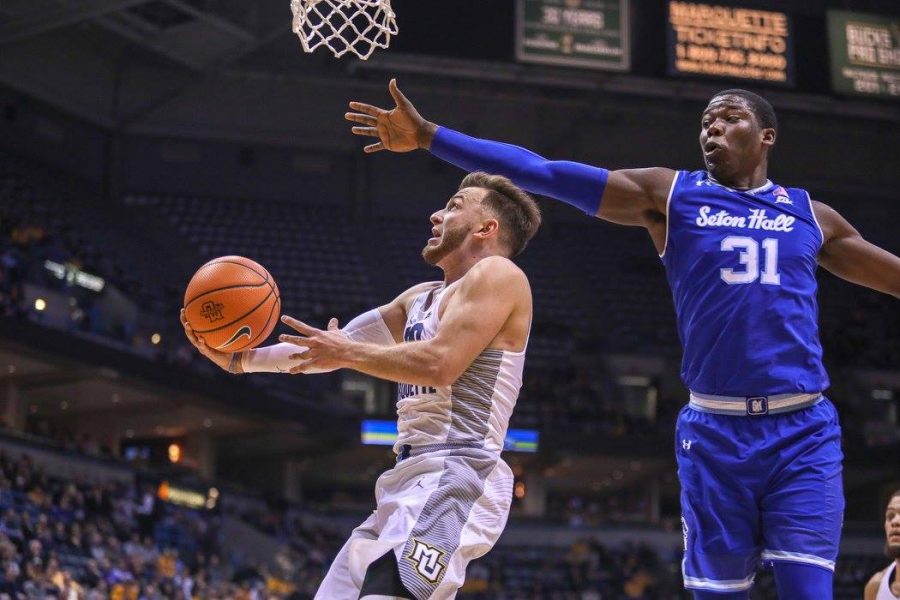 Saturday night against No. 3 Villanova, senior guard Andrew Rowsey had one of his worst performances in a Marquette uniform, scoring six points on a lackluster 2-for-12 shooting before being benched in the second half.

“I don’t think Andrew (Rowsey) had his best game,” Marquette head coach Steve Wojciechowski said Saturday. “For a kid that’s been so good, these types of games can happen.”

Three days later, Andrew Rowsey did not let another top 15 team wear him down. The team’s lone senior scored 31 including Marquette’s first 11 to dethrone the first place team in the BIG EAST, No. 13 Seton Hall, 84-64 and earn Marquette’s first win against a Top 25 team in almost a year.

Rowsey scored the team’s first 11 points and sparking an 11-0 run early in the first half to give Marquette its first lead of the night. He was the only Golden Eagle to score a field goal in the first five minutes.

“He really came out aggressive but not reckless,” Wojo said following Tuesday’s win. “Andrew gives us a swagger, and we need that from him. And today he certainly got us off to a good start.”

Despite having a reputation for elite 3-point shooting, all but three of those first 11 points came from inside the arc.

“This may be hard for you guys to believe, but we want to be a driving team,” Wojo said. “We want to drive the ball and I thought Andrew really drove the ball well. And a lot of times because people have to respect our shooting, you can find space.”

Seton Hall kept the game within 10 points for significant stretches of the first half and the start of the second half.

“We knew that was a real tough team,” freshman guard Greg Elliott said. “And we knew we had to bring our all … bring our A-game so that we could beat that team.”

However, after the Pirates cut the game to 42-41 with 16:45 left, Marquette went on a 16-0 run over the next four-plus minutes to put the game out of reach. Seton Hall did not come close to coming back, having the game within single digits for only 29 seconds in the final 14 minutes.

“They feed off of transition rebounding, so there was a real focus on if we could keep them to only having one shot,” Wojo said. “And then that would give us an advantage in transition.”

Defensively, Marquette neutralized one of the most dangerous scoring trios in the BIG EAST. Seniors Angel Delgado, Desi Rodriguez and Khadeen Carrington averaged more than 47 points per game in the previous five games, but were held to 29 combined points tonight.

“Their big three of Rodriguez, Delgado and Carrington is as good a trio as there is in the conference,” Wojo said. “(Delgado) is such a hard matchup, and he’s given us all sorts of nightmares in the past.”

Rodriguez entered play shooting 35.8 percent from the perimeter but only had two attempts Tuesday, both of which were misses.

“It was our best defensive performance of the year,” Wojo said. “It’s not like we just started talking about this, but today they executed it, so that was really good to see.”

“That was definitely a focus for our team,” junior center Matt Heldt said. “We wanted to double, try to get the ball into his hands and then if not, I just had to really work my ass off to make it tough for him and don’t let him get offensive rebounds.”

Heldt had the challenge of guarding Delgado for extended stretches of Tuesday’s win. “He was really physical,” Wojo said. “He was really locked in on the defensive end.”

Marquette’s defensive effort also translated on the glass, out-rebounding one of the best post teams in the country, 38-33.

“When you look at the stat sheet, it isn’t like one guy had 16 rebounds,” Wojo said. “It was a team effort where the entire group had to come up with boards, and our guys did that.”

Three perimeter players – Sam Hauser, Rowsey and Elliott – all had at least five offensive rebounds. “When you get those types of rebounding numbers from your guards, it really helps out our big guys,” Wojo said. “Because it is very difficult to both block out and Delgado, then go get out.”

This is Marquette’s first win since last year’s 74-72 shocker over No. 1 Villanova. Marquette was previously 0-4 against Top 25 teams this season. All four of those losses are to teams currently in the nation’s top 10.

Marquette’s competition will not get much easier later in the week; the Golden Eagles visit Butler for the team’s third road BIG EAST contest of the year Friday night. The Bulldogs have taken five of the last six contests against Marquette and the last five games at Hinkle Fieldhouse.