Trials Day 5: Lehman comes in fourth in 1,500 meters, has one more race today 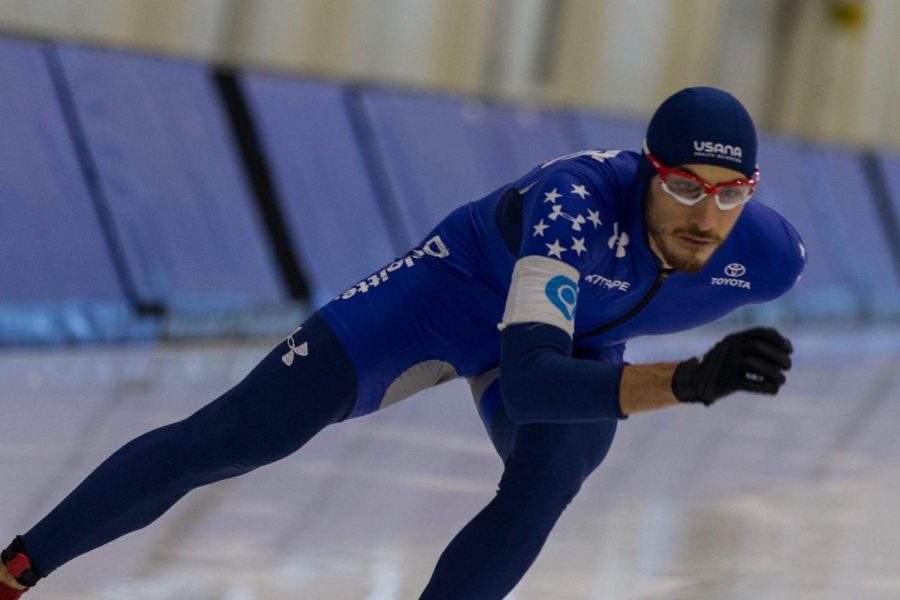 Marquette junior Emery Lehman finished in fourth place in the 1,500 meter race Saturday night, as he missed out on third place and an Olympic spot by just .21 seconds. (Photo courtesy: Emery Lehman)

The difference between a place at the 2018 Pyeongchang Olympics and staying back in Milwaukee was decided by .21 seconds Saturday night at the Pettit National Ice Center. Emery Lehman, a junior in the College of Engineering, was on the wrong end of the finish.

That’s faster than a blink of an eye.

That’s how close Lehman missed out on Pyeongchang. While he still has one more race to go, the mass start tomorrow, he said that his trials are effectively finished.

“It’s really just a fun race,” Lehman said about tomorrow’s mass start. “As of right now, trials are over for me.”

Lehman was in the second to last pairing Saturday, when the fastest skaters race. He was paired with Brian Hansen of Glenview, Illinois, a former Marquette student that transferred to the University of Colorado Boulder after his sophomore year.

Mantia said that it was a tough race because of the quality of the skaters involved.

Despite the fourth place finish, Lehman maintained he was still pleased with his efforts considering his opponents.

“It’s tough, it’s definitely tough,” Lehman said. “Being close to three of the best 1,500 meter skaters in the world, it’s a pretty good day to be that close to him. Shani had the world record up until two or three weeks ago. Joey and Brian had World Cup medals in this event, so to be that close, it was thrilling.”

“It sucks to be that close and so far off, but at the same time, being that close to three of the best, it’s a pretty good feeling,” Lehman added.

Hansen said it was a great race to be a part of and he feels that he is in contention for a medal at the Winter Games.

“There’s been some moments where I could just about feel that I was right there at the podium again, but there’s been no race where it’s been enough this year,” Hansen said. “I still have three weeks, and I think that three weeks is enough to make a difference. It’s not my expectation, but it is a hope, though.”

While this is not the first time that Lehman has been in this position, it’s certainly not the last.

For now, Lehman will have to play the waiting game. U.S. Speedskating will convene after the Trials and announce the eight-man team on Monday.

“For now, I really just can’t get too anxious. (Just) skate a good race tomorrow and see what they tell me.”

Lehman says the waiting will be the toughest part.

“I’ll have to distract myself with socializing with family or friends, or playing video games or something like that.”