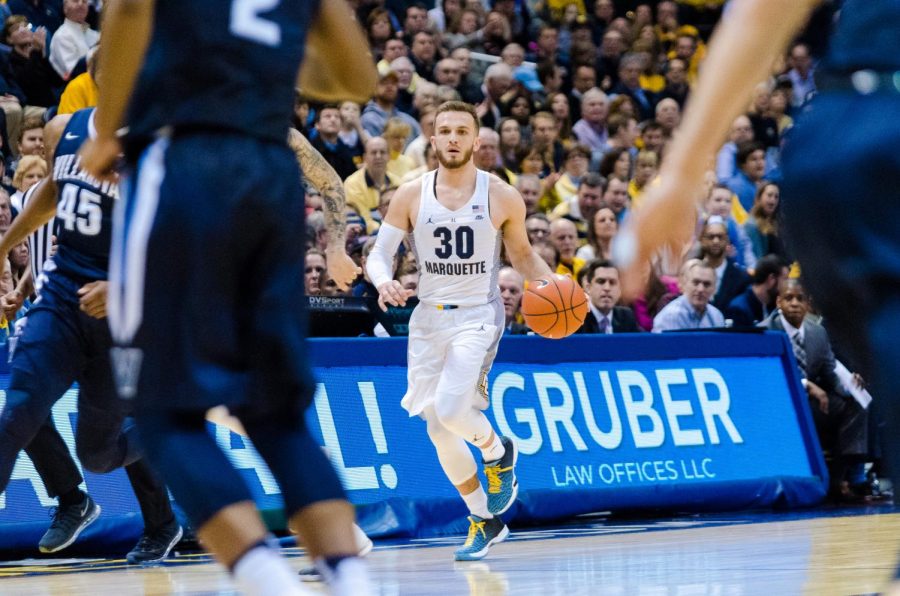 Andrew Rowsey brings the ball up the court in last year's upset of then-No.1 Villanova.

It is nearly impossible to forget the last time Marquette met Villanova. Last January produced one of the most memorable regular season wins in program history, as the Golden Eagles came back from a 17-point deficit to take down then-No.1 Villanova 74-72.

BATTLE OF THE GUARDS
Both sides’ guard play will be among the biggest storylines. The Wildcats will be hyper-focused on shutting down Markus Howard, but Sam Hauser and Andrew Rowsey’s 3-point proficiency is also well documented. Rowsey has shot 44.3 percent from distance and scored 30 or more points in two of his last three games.

While Marquette’s 3-point shooters are notable, Villanova’s are prolific. The Wildcats have five players shooting the three at 40 percent or higher, as opposed to three for the Golden Eagles. Junior point guard Jalen Brunson has averaged 18.9 points per game and poured in 31 points against Butler last Saturday. Fellow guard Mikal Bridges also had 21 in the loss to the Bulldogs.

BALANCE WILL BE KEY, ESPECIALLY ON THE BOARDS
While both teams can shoot from distance at a high clip, expect Villanova to master the inside-outside game. The Wildcats will probably lean heavily on freshman forward Omari Spellman, who is third in the conference with 8.1 rebounds per game. Meanwhile, junior Matt Heldt, who will likely be matching up with Spellman, is 29th in the conference, averaging 4.6 boards per game.

In Marquette’s last matchup, the Friars out-rebounded the Golden Eagles 39-28. Meanwhile, the Wildcats average 35.6 rebounds per game while their opponents average 32.6 boards per game.

Unlike its last two opponents, Marquette will be squaring off against a team that does not commit a lot of turnovers. Villanova is first in the conference in assist-to-turnovers ratio at 1.66.

LOOKING FOR A SIGNATURE WIN… AGAIN
The Golden Eagles have yet to claim a victory over a top 50 team, per KenPom, a prominent college basketball analytics website. Providence came the closest at No. 63, but that’s hardly the caliber of upsetting Villanova at home, which helped put Marquette on the right side of the bubble last year.

KenPom ranks the Wildcats second in the country, giving Marquette another chance for a signature win. The Wildcats’ lone loss came last Saturday when Butler put up an astounding 101 points. The Wildcats have allowed a combined 186 points in two games but only gave up 64.3 points per game before BIG EAST play, which suggests the last two games might be an aberration.