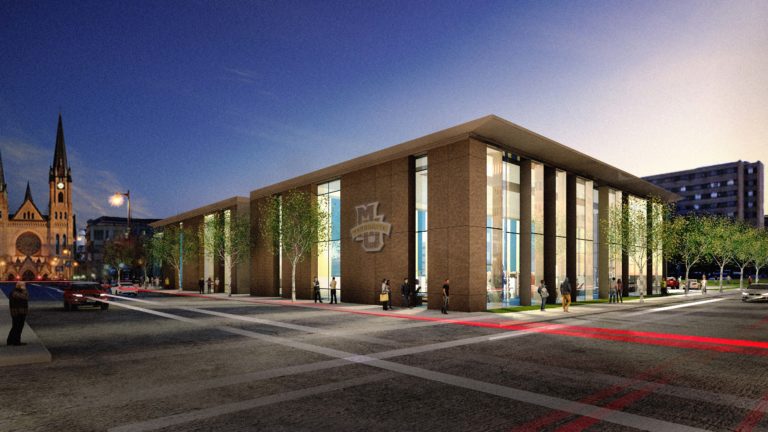 Marquette announced a major adjustment to its plans for the Athletic Performance Research Center (APRC), separating it into four phases and moving it to a smaller plot of land southwest of 12th and Wells Streets. The facility was initially planned as one phase in a 10-acre spot just south of Straz Tower on the east side of campus.

The new location means Marquette will not include indoor field space, a key component of the original APRC, in the first phase. Scholl described this as “no longer necessary” since the university added a seasonal dome to Valley Fields last February.

Per the release, this phase of construction will include locker rooms for lacrosse and golf, faculty research and additional strength and conditioning space. This phase will be 50,000 square feet, a significant downsize from the 250,000-300,000 square foot estimate in January 2016.

“I think everything that we contemplated being in the facility on the other piece of land will be available for us here as well,” Scholl said. “Obviously the indoor training center was no longer necessary as a result of the dome that was put down in the valley, so we’re actually very comfortable that we’ll be able to meet all of the needs certainly from an athletic perspective and I believe from a research side in the new facility.”

Marquette’s men’s and women’s lacrosse programs have not had locker rooms in their first six years despite the men’s program winning a pair of BIG EAST titles.

“It’s a big step forward for our lacrosse programs,” university spokesperson Brian Dorrington said. “Our lacrosse student-athletes are getting ready for their games in their residence halls and now they’re going to have a state-of-the-art facility.”

Without the indoor fieldhouse, the lacrosse programs will have to settle for limited seating inside the seasonal dome at Valley Fields during inclement weather.

“Obviously when we play inside the dome, there’s a limitation on the number of folks who can come to a game,” Scholl said. “So we hope to play as many of our games outdoors as possible. The dome is there for those games where we have no choice but to play indoors, and seating is limited.”

The facility will not have an indoor track in the first phase, a key part of the initial plan. This leaves track and field athletes that were promised a new state-of-the-art facility with the Marquette Gym, which was built in 1922.

“(The Marquette Gym) is a serviceable facility for what they need to do,” Scholl said. “As of right now, we don’t have a plan for an indoor track.”

Scholl said the initial phase will cost $24 million. Scholl declined to comment on the cost of future phases would cost. Primary sponsor Aurora Health Care planned to pay for $40 million for the initial project. Marquette’s press release said Aurora and Marquette “continue to be in discussions about concepts within the new facility.”

“This is the first step in a process,” Dorrington said. “It could include three additional phases.”

“This new location is smarter and more convenient for our student-athletes, faculty and staff that will be housed in the APRC,” university president Michael Lovell said in a statement. “While the location has changed, our vision to advance our mission through innovative sports and human performance research remains unchanged.”

An official groundbreaking ceremony is expected in the next few weeks, and Scholl expects the first phase to be done around the spring of 2019. Marquette currently does not have a timetable for future phases.

In the meantime, there are no plans for the 10-acre space south of Straz Tower. Marquette purchased sections of the original location between 2014 and 2016 for the APRC, per the Milwaukee Journal Sentinel.