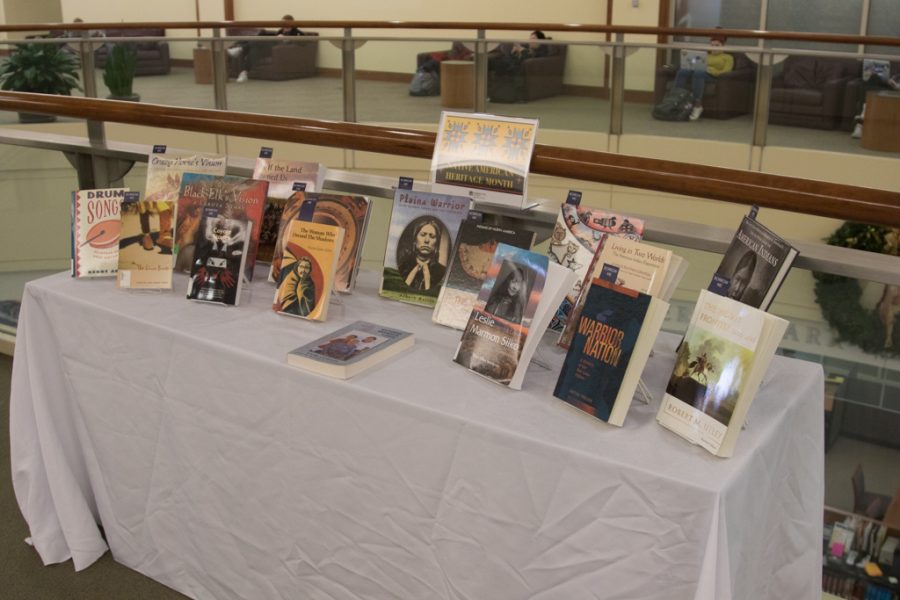 Elisa Coghlan, coordinator of marketing and outreach and a member of the Events and Exhibits Committee, said the annual displays for Native American Heritage Month are designed to not only honor Native Americans but also to educate people on their history and contributions to society.

She said libraries have a responsibility and calling to educate and inspire people to learn more about the world around them.

Coghlan said the library tries to “capitalize on the expertise” of academic resources that the university has access to in order to enrich how Raynor highlights certain facets of Native American history and culture.

“A deep principle of people who work in libraries is encouraging people to learn: to get the bigger picture,” Coghlan said. “There’s an emphasis on presenting Native Americans as a people with a rich history and a rich culture.”

Mark Thiel, archivist in the library’s special collections and university archives, has managed the university’s Native American collections for 30 years. Raynor focuses on Native American relationships with the Catholic Church demonstrated by the university’s collection of records from the Bureau of Catholic Indian Missions, which takes up about 85 percent of the collections. Thiel said Marquette’s large amount of archival information has attracted many graduate students and Ph.D. candidates to the school.

“Over the years, we’ve had a number of Ph.D. students here that became students simply because of the collections here,” Thiel said. “(The variety of collections) definitely does attract students to Marquette.”

Tara Baillargeon, the head of the Research and Instructional Services Department, said the displays also draw attention to the various digital resources Raynor has to offer, such as the Digital Scholarship Lab. Students and faculty can use infographics, databases, desktop publishing and other tools in the lab to make research more collaborative.

The use of those tools, she said, makes research more meaningful and allows people to study all sides of an issue and better understand it as a whole. Baillargeon’s hope is that the displays will spark a connection between student researchers and library professionals.

“I think (the displays are) an opportunity to make a connection between ways that our department can help faculty and students while highlighting Native American Heritage Month,” Baillargeon said.

“The goal is to present an opportunity to highlight the contributions that Native Americans have made to this country,” Baillargeon said.