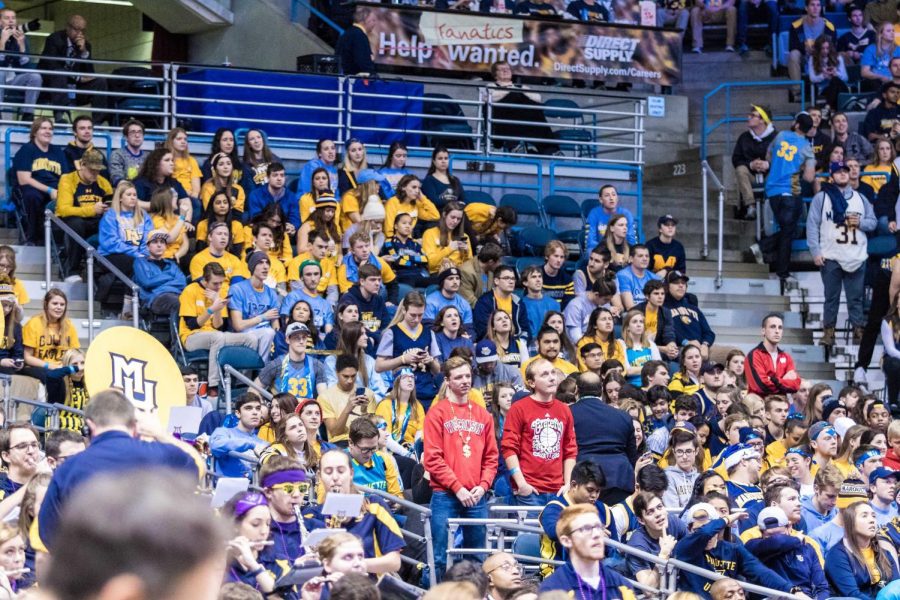 Even in the BMO Harris Bradley Center, there are a few people that show up in Wisconsin attire.

Nicolette Boggia, a junior in the College of Nursing, never considered herself anything more than a casual basketball fan, but she knew to set her alarm early on the second Saturday of last December. It was the first time in her college career at Marquette that the Golden Eagles were playing Wisconsin in Milwaukee and she wasn’t going to miss it.

Boggia will make most of the Saturday games, but has no qualms with staying home either. She learns about the team vicariously through her more enthusiastic friends. When it comes to the Marquette-Wisconsin game, though, Boggia knew better than to doubt its importance

“It’s kind of like the first semester National Marquette Day,” Boggia said. “(It was) the year we hosted it, at least.”

With the 100th anniversary of the rivalry looming, not everyone 80 miles west of Milwaukee is as excited.

Fleuchas, a self-proclaimed mostly casual Wisconsin basketball fan, had a reaction not unusual amongst his peers. In fact, it was ordinary.

Suggest to a Madison student that Marquette is coming to town in a week for the continuation of a heated in-state rivalry, however, and they might just laugh, or, even more likely, just be confused.

“I mean, I guess we could be considered rivals,” Wisconsin junior Amanda Mix said. “We are in the same state and all. And I guess some kids might have applied to both schools, especially the Wisconsin kids. But when I think of our rivals, I definitely think of Minnesota. Not Marquette. Not at all.”

The two teams haven’t quite been equal opportunity NCAA Tournament contenders in recent years, which cooled the rivalry off.

“We’re pretty bad this year,” Fleuchaus said of the 3-5 Badgers. “And the past couple years, either we weren’t that good until conference games, or (Marquette) wasn’t that good either.”

In Madison, there’s a much larger attraction to deal with. A 12-1 football season gave Badger fans high hopes and playoff aspirations. And though a crushing late season defeat to Big Ten rival Ohio State nipped their chance to make the College Football Playoff, the Badgers are appearing in the prestigious Orange Bowl against the University of Miami. Regardless, football has eaten up most of the attention recently.

“All our focus is really on football right now,” Wisconsin junior Ashling Davern said. “I feel like even when we are good at basketball, nobody really gets into it until after football season is through. And I love going to the basketball games.”

Now that Wisconsin football is on hiatus for several weeks until bowl season, the campus might be more inclined to pack the Kohl Center on campus and cheer on the Badgers.