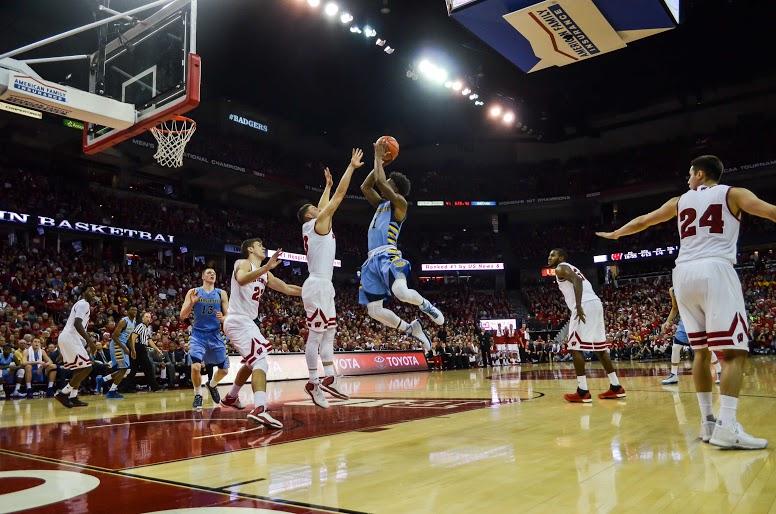 Marquette's Duane Wilson goes up for a layup against Wisconsin in 2015. The Golden Eagles beat the Badgers 57-55.

Since Marquette and Wisconsin’s first game in 1917, the two teams have faced each other 123 times, with the series favoring Wisconsin 66-57. With the two teams facing off for the 124th time this Saturday, here are the top five moments in the rivalry’s history:

1917: The Beginning of a Rivalry
Marquette’s first clash with the Badgers came after Wisconsin had already been in the NCAA for 20 years. Wisconsin won 15-14, a score made possible by the late-game controversy. Wisconsin was led by head coach Walter Meanwell, who already racked up three national championships for Wisconsin prior to the NCAA era.

1944: Poaching Gene Berce
Future New York Knicks guard Gene Berce initially committed to Wisconsin. He was there for one day before head coach Bud Foster told him he had to make the team before receiving a scholarship. Marquette head coach Bill Chandler seized the opportunity and immediately offered Berce a scholarship. Berce took Chandler’s deal. The next week, Marquette played Wisconsin and Berce scored 22 points in a victory against his former institution. Foster later said he regretted his decision to let Berce go.

1974: The Buzzer-Beater
Head coach Al McGuire was at the height of his reign at Marquette. The Warriors were gunning for their ninth straight victory over the Badgers. Wisconsin was up nine points in the second half and looked like they’d snap Marquette’s streak, but a mass of turnovers and missed free throws led to a 59-58 Warriors win after a Maurice Lucas buzzer-beater. Marquette advanced to the national championship that year before losing to North Carolina State.

2001: Shocker at the Kohl Center
With a roster led by freshman all-star Dwyane Wade, Marquette rattled off 10 straight wins to start the season and appeared to be 40 minutes away from an easy win against its in-state rival. Instead, an unranked Badgers team with a 4-6 record trounced Marquette, 86-73. Wisconsin’s Kirk Penny dropped a career-high 33 points and teammate Mike Wilkinson came off the bench to score a double-double. It’s still the Badgers’ most lopsided victory against Marquette since 2000.

2015: Ellenson shines, Fischer seals victory
Marquette freshman power forward Henry Ellenson scored 15 points and grabbed 11 rebounds, but that didn’t stop the second half from getting heated. After trailing by 14 points, the Badgers tied the game at 55-55 with just over a minute left. Luke Fischer, a sophomore at the time, got a rebound off a missed Ellenson jumper with under 30 seconds left and laid it back in to give the Golden Eagles the lead. As time ran down, Wisconsin missed a 3-pointer and was forced to foul with five seconds to go. Marquette’s Haanif Cheatham missed, but Fischer gathered the rebound to seal a 57-55 Marquette victory. It was the first time in 40 years that Wisconsin lost three non-conference home games in the same season.