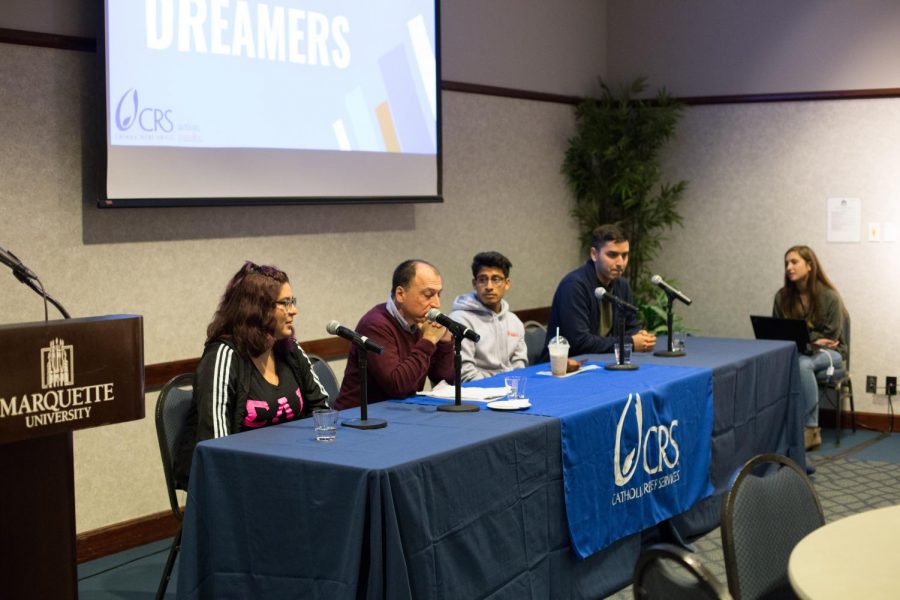 A group of undocumented students, their peers and supporters shared their stories and messages of support at an event held last Thursday called Cookies and Conversation. The event was sponsored by local and campus organizations, including Catholic Relief Services, College Democrats, Inner Varsity, Center for Peacemaking and J.U.S.T.I.C.E.

When Jonathan Irias was 7, he and his brothers slept in a bus station and were homeless in Texas while he waited for his Dad to cross the border from Mexico.

The freshman in the College of Arts & Sciences and is an undocumented student who shared his story along with other undocumented students at an event held last Thursday called Cookies and Conversation. The event was sponsored by local and campus organizations, including Catholic Relief Services, College Democrats, Inner Varsity, Center for Peacemaking and J.U.S.T.I.C.E.

Irias said that being a DREAMER has shaped him into the person that he is today. “I am much more intentional with my actions and appreciate the little things much more,” he said.

Three DREAMERS, young people who are protected under the Obama-era policy Deferred Action for Childhood Arrivals, were present on the panel, along with Edward Fallone, a law professor who specializes in immigration law.

Zach Wierschem, a senior in the College of Business Administration and one of the organizers for the event, said “the goal of the event was to inform and engage in a dialogue with the Marquette student community about the topic of DREAMERS, The DREAM Act and undocumented immigrants.”

Before the DREAMERS told their personal stories, Fallone presented common misconceptions about DACA and then what it actually means. He said without DACA, young people who were brought to the United States as children and only knew the U.S. as their home could not get a job legally. Thus, they would not be eligible to file a FAFSA, making college unaffordable.

Fallone clarified what he said are some of the misconceptions of DACA and the many consequences that DREAMERS will face with the discontinuation of DACA. He said the first misconception is that DACA encourages illegal immigration, because in order to qualify for it, you had to arrive in the United States before 2007.

Another misconception Fallone cited is that DACA encourages crime by illegal immigrants. Fallone said, “Only two thousand out of eight hundred thousand DREAMERS lost eligibility because of crime. That is a quarter of one percent. It is false and despicable to put these assumptions on DREAMERS. These are fine individuals.”

While Trump’s decision to end DACA has some Dreamers feeling uncertain in their future, the DREAMERS on the panel said that they just have to take things day by day for now.

“With an issue that has so many fronts, it requires everyone to be an advocate,” Fallone said.

Guests at the event were then encouraged to sign the Catholic Relief Services petition titled ‘Protect DREAMERS & Provide Aid to Refugee Families.’

“United States citizens … they should use their privilege to advocate for someone who does not have that same privilege … We are all men and women for others,” Irias said.