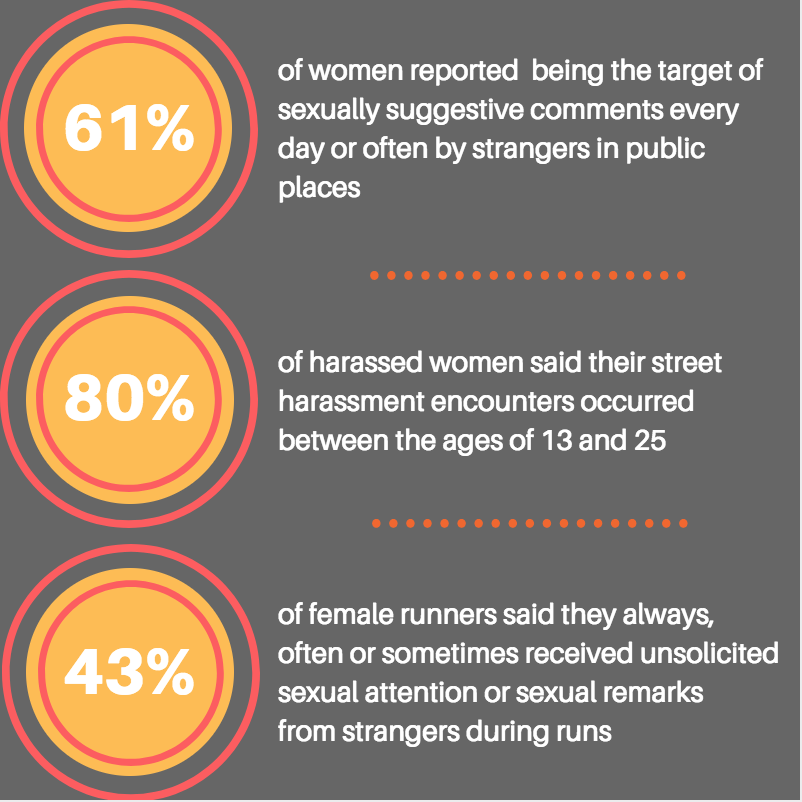 It’s late on a Saturday, Tess Bridges just got done with a long shift at work and she’s walking back home. All the sudden, she hears a male student yell at her from a balcony.

But he’s not yelling just anything. He just told her he wants to forcibly put ice cream where it doesn’t belong.

When Bridges responded to him, cursing, she said he told her he wanted to “f— that language” right out of her mouth.

Bridges said society has reinforced the idea that men are entitled to women’s bodies.

“Catcalling eats away at women, repeatedly reminding them that they are not safe and could be raped or sexually assaulted at any moment,” Bridges, a senior in the College of Arts & Sciences, said. “It gnaws away at any sense of safety and any sense of self.”

Women are more likely to experience street harassment than males. Women of color are even more vulnerable, according to a 2000 study by Northwestern sociology professor Laura Beth Nielsen.

Nielsen found that 61 percent of women report being the target of sexually suggestive comments “every day” or “often” by strangers in public places.

Transgender individuals, along with others in the LGBTQ community, experience higher levels of street harassment than the general population, according to a 2011 study done by the National Gay and Lesbian Task Force and the National Center for Transgender Equality.

While males reported experiencing sexually suggestive comments from strangers in public places, the frequency was lower than for women. Eighty-six percent of men reported hearing these comments “sometimes,” “rarely,” or “never,” according to Nielsen’s study.

In October 2016, Runner’s World reported that 43 percent of female runners said they “always,” “often,” or “sometimes” receive unsolicited sexual attention or remarks from strangers. Only four percent of male runners gave that response.

“We had a couple instances last year where (men) blocked the sidewalk. They’ll jump out in front of us and say, ‘You’re not going anywhere until you give me a hug’ or something really weird like that,” Dorfler said.

Female members of track club have endured instances of men running alongside them, making inappropriate comments and men shouting from cars. One member had a man throw a rock at her in Pere Marquette Park for not responding to his catcalls, Dorfler said.

“We’ve never gone a week without it happening,” she said. “It’s just we’re out in the cold, we’re out at dark, we’re out all the time, whereas I think the general public just walk from their workplace straight to their car.”

A majority of female runners said they “always,” “often,” or “sometimes” are concerned they could be physically assaulted during a run, according to the Runner’s World report. Of male runners, seven percent voiced the same concern.

Wisconsin has laws in place against disorderly conduct and harassment, both of which encompass many forms of street harassment, according to the Wisconsin State Legislature.

Disorderly conduct could include indecent, profane and unreasonably loud commentary. Suspected individuals could face a fine of up to $1,000, imprisonment up to 90 days or both.

Individuals suspected of repeated harassment or intimidation could be fined up to $1,000 if convicted.

“Simply having a law on the books … may discourage some illegal behaviors, and the existence of certain laws may convey a message of societal disapproval for certain conduct,” the study said.

Cities are centers for catcalling

In 2014, a video called “10 Hours of Walking in NYC as a Woman” went viral. In it, a woman walked silently through Manhattan, showing viewers her over 100 uncomfortable encounters with men throughout the city.

“Somebody’s acknowledging you for being beautiful,” one man said. “You should say thank you more!”

Bridges said she thinks this mentality is flawed.

“Catcalling is not a compliment. In fact, it has nothing to do whatsoever with appearance,” she said in an email. “It is purely an act of domination, power and violence.”

With more people walking, running, biking or using public transportation to get to work, this kind of catcalling appears to be more common in urban areas like Milwaukee.

Catcalling may be reported more in cities than rural areas due to the lack of personal relationships with catcallers, said Mackenzie Kirkman, a graduate student researching perceptions of sexism.

More conversations about catcalling are necessary, said Emmy Heeney, a senior in the College of Nursing and co-president of Empowerment.

“Women need to be telling people their experience,” she said. “I think it’s really important that we tell our partners, that we tell our family members that this conversation is not just for women only.”

She said addressing sexual harassment in the classroom is an important step. This includes discussion about consent and a well-rounded sex education from a young age.

Confronting friends when they make uncomfortable comments is a responsibility that should be carried by both women and men, Heeney said.

“I think that it’s most harmful when it’s done by students, by people your own age, by people that you may know,” Heeney said. “I think that is the worst harassment that you can receive because you know that they are educated, that they should know better.”