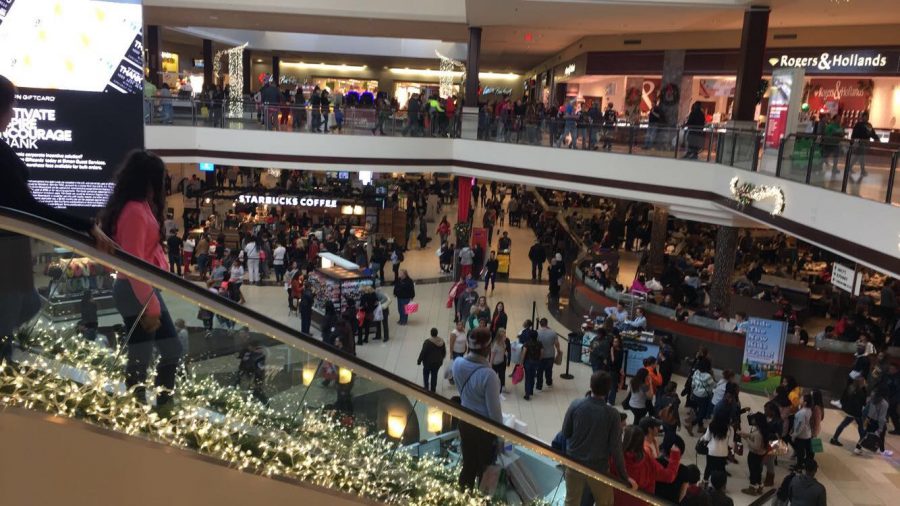 When Greta Olson, a sophomore in the College of Health Sciences,  headed to the famous Mall of America in Minnesota for Black Friday shopping, she expected the typical long lines, frantic shoppers and great deals, but ended up witnessing punches, blood, and a trip to the hospital.

“You’ve got to develop strategies because that is a war zone,” she said.

In total, she witnessed five different fights, the last of which ended with the last American Girl dollhouse plummeting from the top shelf, gashing open someone’s head and prompting a 911 call.

Welcome to Black Friday in America, the craziest, turkey-fueled monument to commercialism ever conceived.

The term “Black Friday” was first coined in Philadelphia in the 1960s and describes the day of reduced prices in stores after Thanksgiving. It originally had a negative connotation, referring to the densely crowded streets and traffic jams, but is now advertised by stores around the country.

While some choose not to leave the house on this hectic day of traffic and buying, others make the best of it and try to get good deals.

For  Olson, Black Friday is an annual family tradition that involves planning. While spending Thanksgiving in Minnesota, the family took an excursion to the Mall of America, the largest mall in the U.S.

Thanksgiving night, her family gathered coupons and formed a plan of attack based on where and when the best deals were. They went out Friday morning ready to divide and conquer.

“When you go Black Friday shopping, the lines are crazy long,” Olson said.

So, as soon as they got to Bath & Body Works, Olson got in line to check out.

“I stood in line while everybody else shopped, and then they’d slowly hand me items so that by the time they all got done shopping, I was almost at the front of the line,” Olson said.

This plan proved to work nicely for the Olson family.

Any mall — but especially one as large as the Mall of America — gets crowded on Black Friday, as shoppers hunt out deals on all kinds of products. At times, the prospect of saving money with limited offers can seemingly bring out the worst in humanity.

Others find ways to enjoy the sales in a less hectic environment. Kennedy Latham, a freshman in the College of Nursing, went shopping without anything specific in mind. Latham and her cousins went out late Thanksgiving night, around 1:00 a.m. By going later in the night they escaped the craziness of some of the early doorbuster sales that began Thursday afternoon.

But sometimes the holiday madness is inescapable. Latham said that two years ago, her 9-year-old cousin came with them and was knocked over by a woman that did not offer an apology.

“People get pretty serious sometimes, which I think is kind of funny. But most of the time it’s actually low-key,” Latham said. “We usually go like an hour after (the sales have) started, so all the crazy people are out of the way.”

Jake Schweizer, a sophomore in the College of Engineering, went as early as possible. At 5:00 p.m. Thanksgiving night, Schweizer waited outside Best Buy with his sister to get a laptop.

“The line was really big, and we had to wait outside for like an hour in the cold,” Schweizer said.

People tend to have strong opinions about Black Friday. Many love the holiday bustle and excitement while others would rather be anywhere but a crowded store during a holiday weekend.

While Olson enjoys her Black Friday tradition, she emphasized the importance of not letting American consumerism interfere with quality family time.

“I think it’s really fun. I mean, you get deals, and that’s good. But I don’t think the materialism should ruin your holiday,” she said.

Olson said that the fact that stores open Thanksgiving night seems excessive and cuts into time that should be spent with family and friends.

Schweizer, however, is okay with taking advantage of the deals as early as possible. “My family was already done with Thanksgiving by then, so I don’t really see a problem with it,” he said.

While Black Friday has come and gone, most stores will continue to have some remaining discounts, as Christmas shopping is now in full swing.