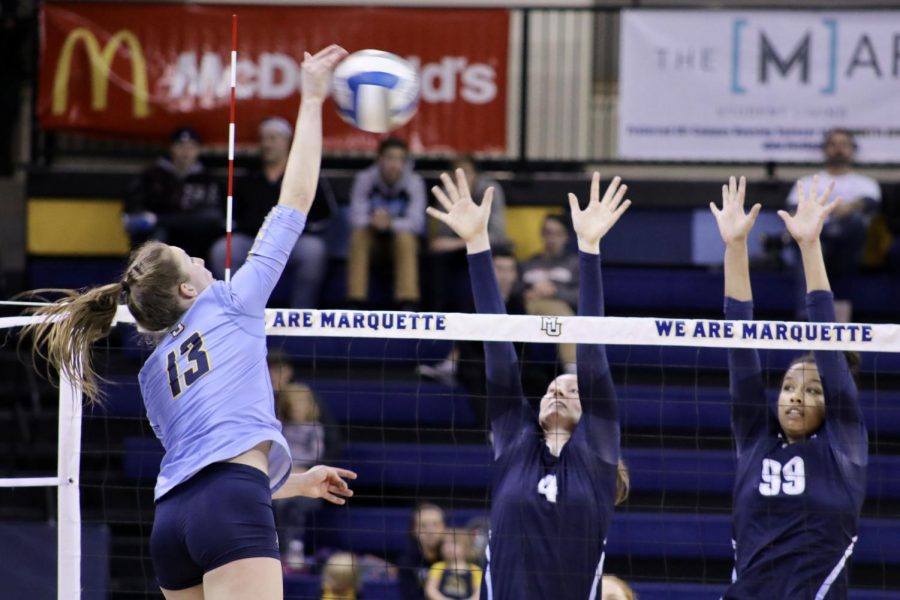 This year, Marquette broke the streak.

Marquette ran a balanced attack with four players reaching double digits in kills. Nobody contributed more than junior outside hitter Anna Haak, who put up 20 kills and 20 digs with a .450 hitting percentage. Stalwart outside hitter Allie Barber chipped in 16 kills, while freshman Hope Werch added a double-double of her own with 13 kills and 18 digs.

“It was a really good team effort,” Speckman said. “It was one of the those things where if I thought (a player) wanted the ball, I was going to give it to them. They were swinging pretty well.”

Marquette whipsawed through Butler in the first set, hitting .464. The teams started the set tied at three, but a 6-0 Marquette run put the set away. Kills from Barber accounted for three of those six points.

The Bulldogs rallied back in the second set on the strength of their blocking. Although Butler only had two of its nine blocks in the third set, the net players altered almost every Marquette attack.

After a series of hard-fought points, the score was tied at 24. Freshman libero Martha Konovodoff then made a critical service error to hand Butler advantage. On the next point, Haak got under an attack from the left pin and sailed it too far, which tied the match.

Marquette head coach Ryan Theis responded by re-focusing his attack from the middle to the outside, which worked wonders. Marquette ended the third set on an 8-2 run to seize a 2-1 set lead.

Marquette kept the effort strong through the fourth set to take the match despite hitting a mainstream .267.

“We just had to keep reassuring that you had to keep attacking the outside of the court, because the middle was taken by the block,” Theis said.