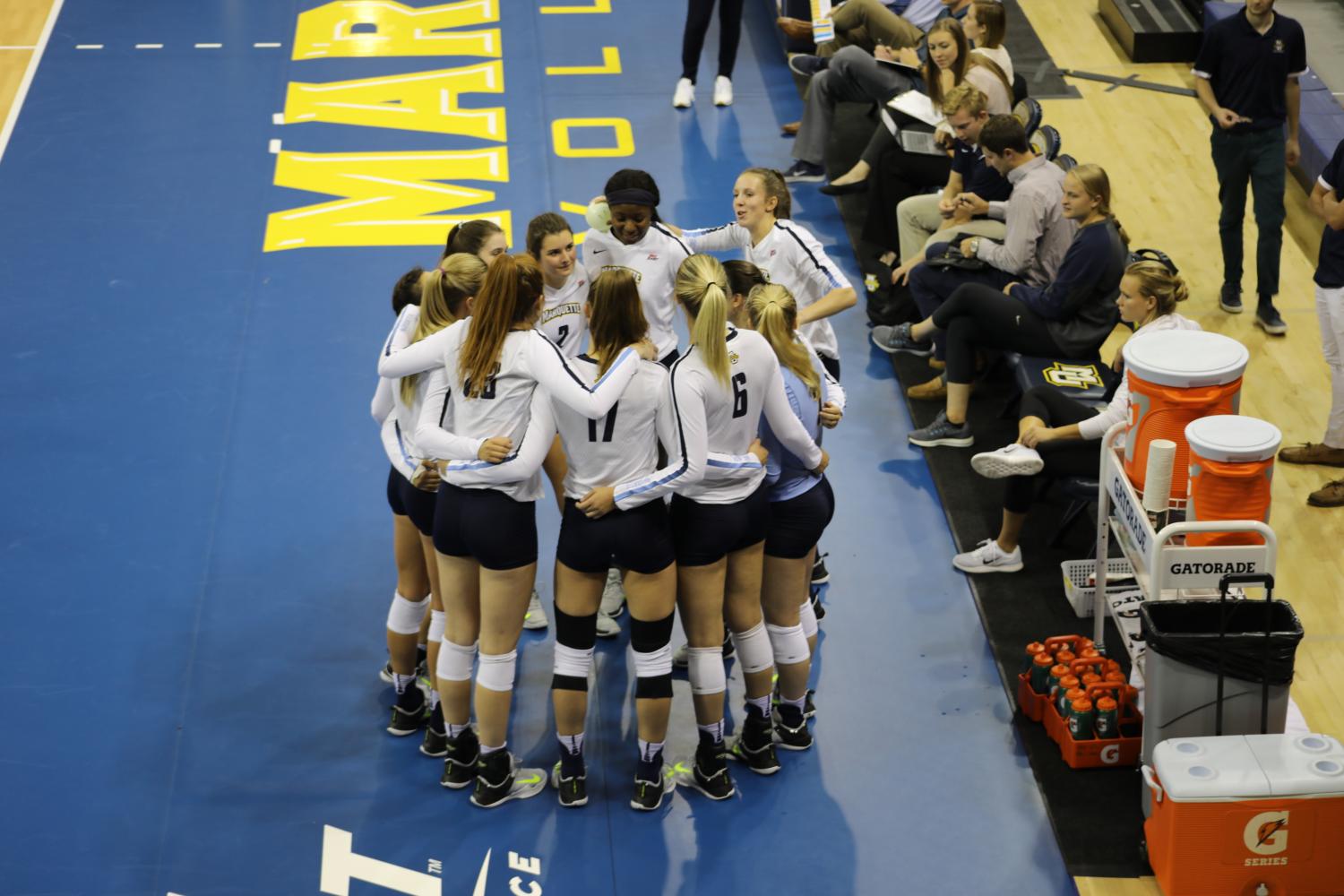 Despite losing four of six starters and team leaders in kills, digs and assists, the Marquette Golden Eagles are back in the BIG EAST Tournament after a 15-3 record in conference, the best in head coach Ryan Theis’ tenure.

Now the Golden Eagles hope to keep perennial heavyweight Creighton from a fourth straight BIG EAST tournament title. Before that can happen, though, Marquette will have its hands full with the third-seeded Butler Bulldogs in the semifinal round Friday. The winner of that match will play the winner of Creighton-Villanova for the championship Saturday.

All three matches are in the Al McGuire Center. Creighton-Villanova gets underway at 12:30 p.m. CT, and Marquette-Butler will follow at 2:30 p.m. CT. The championship match is at 1:30 p.m. CT Saturday. The semifinals are on BIG EAST Digital Network, and the finals are on Fox Sports 2.

Here’s what to expect from each team:
(No. 1) Creighton Blue Jays
Everything was going smoothly for the Blue Jays until last weekend.

After losing to Marquette in early October, Creighton reeled off 11 straight wins, seven of them in straight sets. Creighton only needed one victory in its final two matches to get its fourth straight regular season title. Instead, the Jays were swept by the Villanova Wildcats and narrowly dodged an upset against Georgetown. The team tied for last in the BIG EAST. A timely ace by freshman Alexa Roumeliotis to beat the Hoyas saved the team’s regular season crown.

Still, Creighton sports the most lethal, well-balanced attack in the conference. Outside hitter Jaali Winters and middle blocker Marysa Wilkinson both earned all-conference honors, as did setter Lydia Dimke. Even though Winters’ 3.45 kills per set is a small drop from last season, she remains Creighton’s most effective pin hitter. Defenses must choose between giving her or Wilkinson a one-on-one matchup, a major reason why Wilkinson has a blistering .369 hitting percentage this year.

The Jays also have the personnel to neutralize opposing attacks. Libero Brittany Witt earned a league-high five Defensive Player of the Week awards en route to a Libero of the Year selection. She anchors a back line that has held opposing teams to a .164 hitting percentage, the best mark in the conference.

The best tactic against Creighton is the “tool shot”  — hitting the ball off the block and out of bounds. Villanova used it to circumvent the vaunted Blue Jay back line.
No. 2 Marquette Golden Eagles
It always helps to have the best player in the tournament.

Outside hitter Allie Barber carved a one-woman path of destruction through the BIG EAST this year, boasting a league-best 4.83 kills per set. There is as much distance in kills per set between Barber and second-place Julia Cast as between Cast and the ninth-place player. Barber’s left pin attack is almost unstoppable because of its high point of contact.

Sophomore Lauren Speckman sets up the high, arcing set to Barber. Speckman’s other staple is a “one-ball,” or quick set to the middle of the net, to junior middle blocker Jenna Rosenthal. Speckman averaged a conference-high 11.68 assists per set largely using those two passes. If Marquette gets first touches to Speckman near the center of the net, she usually ensures the play ends in a kill.

Although the Golden Eagles are a potent offense, they’re highly rotation-dependent. Both Barber and Rosenthal almost exclusively play in the front row. When either of them rotates to the back, Theis subs them out, usually resulting in a less efficient offense and occasional inability to get the serve back. The Golden Eagles will need production out of six-rotation players like Anna Haak and Hope Werch (if she’s healthy) to advance in the tournament for the first time since 2013.
(No. 3) Butler Bulldogs
Bulldog head coach Sharon Clark wants her middle hitters to focus on blocking before anything else. The message came through clearly this year.

Middles Bri Lilly and Rachel Klitzing were first and second in the conference with 1.24 and 1.22 blocks per set. When they are in matches together, almost every attack at least glance off their hands. They make life much easier on libero Taylor Takeda by absorbing the brunt of most attacks. By the time balls get to the back row, Takeda is usually in good position to pass them.

Usually, Butler’s offense is led by Anna Logan, the junior outside hitter that made last year’s all-conference team. However, injuries sidelined her for the first nine matches of this season, and she has not operated at 100 percent since then. Finding production on the outside pin has been one of Butler’s defining challenges this season.

One of the ways Butler has addressed this issue is to re-focus the attack from the pins to the middle. Lilly leads the conference in hitting percentage with .387. Her chemistry with senior setter Makayla Ferguson powers the offense.
(No. 4) Villanova Wildcats
There’s no more aggravating team to play in the conference than Villanova. Each point seems to go two or three exchanges longer than normal. The back line gets to balls that seem out of reach. Its style of play brings out the worst in opponents.

The Wildcats’ identity starts from the service line, where they average the most aces per set in the conference. They have to rely on hard serves to get opposing teams out of system without much of a block. Senior outside hitter Allie Loitz leads the BIG EAST with .38 aces per set.

Loitz missed three matches down the stretch with an undisclosed injury. Although she’s back in the lineup, there are other unanswered injury questions. Starting defensive specialist Reagan Lough and outside hitter Mallory Potts have battled ailments all year and are questionable to play this weekend. The Cats may have to shuffle the lineup around, the same way they’ve done all season.

Ending points quickly is the best way to beat Villanova. The Wildcats don’t win points with a big attack like Creighton and Marquette do. Instead, they force teams increasingly out of system until they’re so disorganized that putting the point away becomes simple.