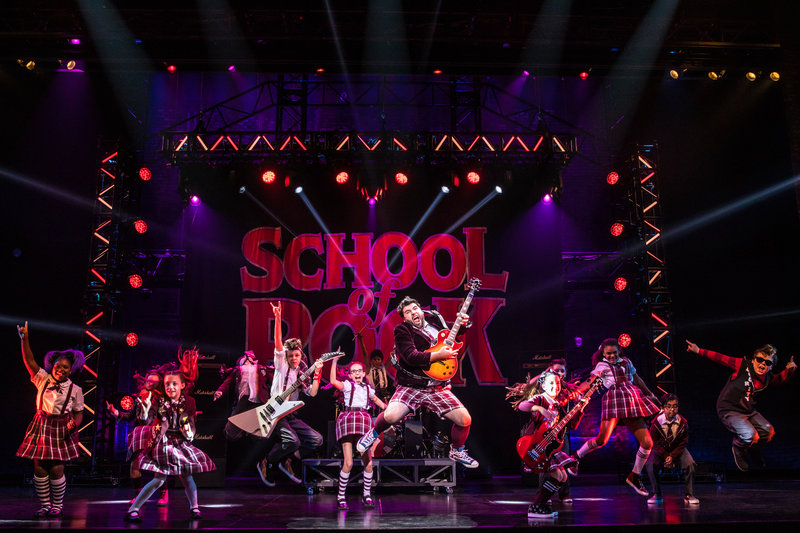 Based on the 2003 movie of the same name, “School of Rock” follows the story of Dewey Finn (Rob Colletti), a wannabe rockstar past his prime. Dewey lives in a spare bedroom of an apartment belonging to his best friend Ned Schneebly (Matt Bittner) and Ned’s overbearing girlfriend, Patty (Emily Borromeo). Dewey consistently misses paying his share of the rent. After getting kicked out of his band, losing his job and threatened to get kicked out of the apartment, Dewey finds himself alone and desperate for money. When he answers the phone to a prestigious prep school calling to offer Ned a substitute teaching job with an impressive paycheck, Dewey sees his chance and takes it—he pretends to be Ned and accepts the job.

As soon as Dewey steps foot in the school, it is clear that he is a fish out of water. Hardly even attempting to pretend to be qualified for the job, Dewey becomes a wonder for the teachers and students alike, who are accustomed to a strict, formal, rigorous prep school with high standards. When discovering that his students can play instruments, Dewey introduces them to rock music and gradually turns a class of obedient, straight-A students to rebellious rock stars. The transformation of the students coming out of their shells and having new disobedient attitudes leads to the teachers’ further intrigue with “Mr. Schneebly.”

Dewey and his students form a band and work to compete in the Battle of the Bands, a rock band competition that Dewey had been counting on to get him some money before he was kicked out of his band.

“School of Rock” follows a standard storyline— a hero faces a problem, finds a solution that gets him in trouble, everything builds up and falls apart at the least opportune time, only to have hope rekindled when the plot seems bleakest. While initially I was slightly skeptical by what could have been a cheesy, predictable plot, I was blown away by the talent, touched by the songs, and laughed out loud at the jokes. And despite a couple of brief issues with a muffled sound system— likely due to it being the tour’s opening night in a new theater— the show ran smoothly.

Colletti brings the role of Dewey to life with charisma and energy. Although I have personally never seen the movie “School of Rock,” the influences of Jack Black—who played Dewey in the film—were recognizable. Colletti’s small mannerisms and delivery of the subtler jokes made Dewey a character impossible not to simultaneously laugh at and love.

Principal Rosalie Mullins (Lexie Dorsett Sharp) also performed a standout role as the adult female lead. Initially uptight, strict, and showing disdain for Dewey, the audience sees her softer side and her inner love of rock with a show-stopping ballad, “Where Did the Rock Go?” as she and Dewey fall for each other and form an unlikely pair.

Most impressive of all, however, were the children. They played all of their sets live. I was left in awe of not only the acting and vocals of the cast of young kids, but also professional level music skills. Despite the abundance of children in the cast, many of the jokes were aimed at slightly older audiences.

The show finished strong with a live concert, as if the audience were in the show truly watching a band competition. The set included more highlight hits like “School of Rock,” “Stick it to the Man” (Encore) and “Finale.”

Colletti grabbed the mic and directly addressed the audience as “Milwaukee” while announcing the actors by name during the bows. In the end, the audience was left feeling invigorated, inspired, and ready to rock. Loaded with humor, driven by an impressive cast, and filled with songs that stay in memory long after the final curtain falls, “School of Rock” is a musical one won’t want to miss.

The National Tour of “School of Rock” will be playing at Milwaukee’s Center for the Performing Arts through Sunday, Nov. 26.