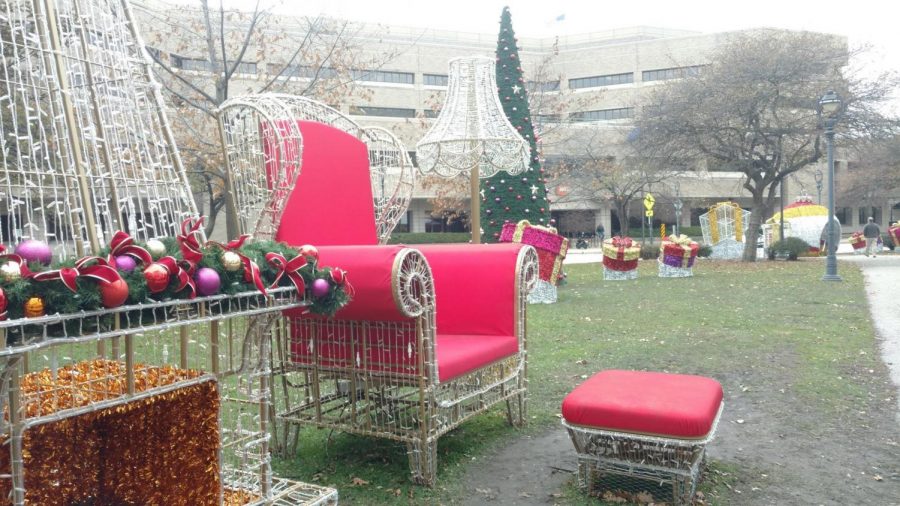 When students return from Thanksgiving break, they’ll notice the streets are lit with colorful, holiday lights.

The 19th Annual Milwaukee Holiday Lights Festival kicked off Thursday, November 16th. The event started off with the lighting of the Christmas Tree outside of City Hall. The thirty-two foot Colorado Spruce was donated by Tom Scannell and Elizabeth Hipp, who attended the tree lighting ceremony. The tree was cut down at a South Side home Wednesday, November 1st. Milwaukee residents have competed for the honor of being the ones to donate the Christmas tree for more than one hundred years. The tree was heaved in front of City Hall and positioned by The City of Milwaukee Department of Public Works Forestry Division and was decorated by members of the Department of Public Works.

Santa himself flipped the switch to light up the Christmas tree in front of City Hall with Mayor Tom Barrett by his side and then moved over to the Kilbourn Avenue Bridge.  The second light switch lit up all of downtown Milwaukee including the holiday decorations in Pere Marquette Park, Cathedral Square Park, and Zeidler Union Square, as well as downtown’s street-level decorations. A luminous and exciting fireworks display over the Marcus Center for the Performing Arts would follow the downtown lighting and end the evening.

Some performances for the night included the Lincoln Center of the Arts Ambassador Choir, the Charles Walker Band, Anita’s Dance Center and the Milwaukee High School of the Arts Choir. WISN-TV (Channel 12) showed all the festivities of the first night live, hosted by anchors Andy Choi and Marquette Universities’ very own Melinda Davenport, an adjunct professor in the College of Communication.

“I really like the lights display and the cool food.” said Kylie, a young Milwaukee resident in elementary school, while her younger sister Olivia said, “My favorite part was that Santa was there to turn on the lights.”

The event was full of holiday cheer, with people enjoying the special time with their families, close ones, and even plenty of dogs. One thing that the event was not lacking in was the number of food vendors present. All different types of delicious smells filled the air.

“The show had lots of great songs and lights, and I liked the ice cream,” said Aj, a seven-year-old Milwaukee resident there for the first time with his family, including his younger brother.

If one missed the fantastic kickoff event but still want to attend, the lights festival will go on until January 1st and will include Jingle Bus rides. They will operate from 6:00 p.m. to 8:20 p.m., Thursdays through Sundays, November 17 to December 30. The rides are two dollars per person and depart from The Shops of Grand Avenue which is located on Center Court, 275 W. Wisconsin Ave. The forty minute tour will be narrated by Milwaukee Downtown’s Public Service Ambassadors and will familiarize riders with downtown landmarks and the most festive and decorated scenes.