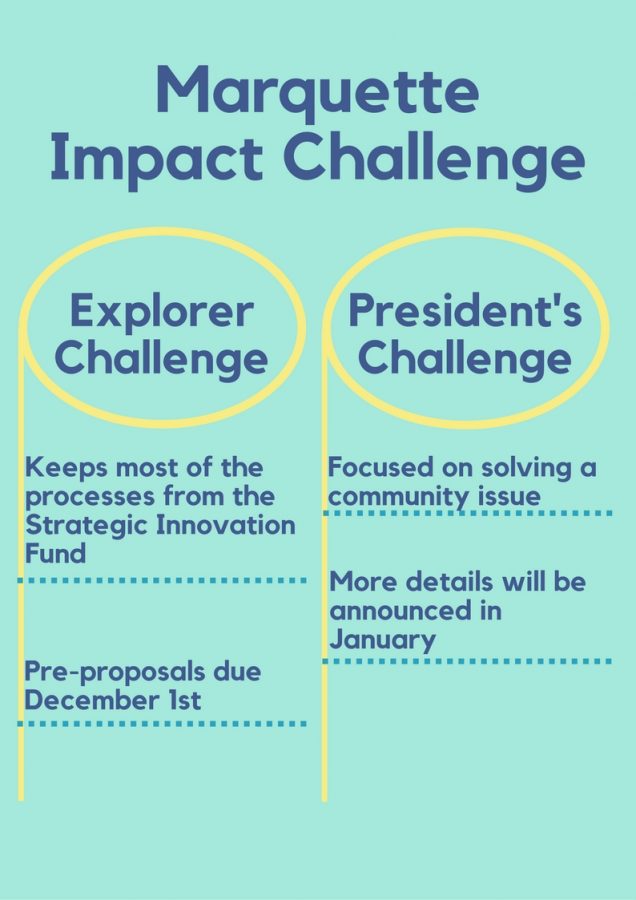 The Marquette Impact Challenge (formerly the Strategic Innovation Fund) has undergone several changes in the past year to create a bigger impact on Marquette and the surrounding community. Graphic by Josh Anderson

When the Strategic Innovation Fund was founded at Marquette, the definition of “innovation” was left intentionally vague, said Jeanne Hossenlopp, the Vice President for Research and Innovation. However, three years later, she said it is time that the fund shifts its focus from innovation to impact.

The Marquette Impact Challenge (formerly the Strategic Innovation Fund) has undergone several changes in the past year to create a bigger impact on Marquette and the surrounding community.

The Strategic Innovation Fund (SIF) was founded in the fall of 2014 as a means of helping the Marquette community develop their innovative ideas into a reality. The fund provides seed money to students, faculty and staff.

“We’ve been making small modifications to (the Strategic Innovation Fund) as we get feedback from people who have participated,” Hossenlopp said. “Now, with three sets of competitions having been completed, we thought it was a good time to take a look and see if we want to make bigger changes.”

The revamped version of the Strategic Innovation Fund was announced Nov. 2 in a University news brief. The first and most obvious change is a new name: the Marquette Impact Challenge. The challenge is divided into two smaller tracks designed to impact Marquette and the surrounding community.

The first track is the Explorer Challenge. This challenge will run largely in the same fashion as the Strategic Innovation Fund did in the past, where applicants submit a draft proposal by Dec. 1 and then submit a final proposal by March 4 after receiving feedback and revising their draft.

The second track is the President’s Challenge. This challenge will run in a similar fashion as last year’s Grocery Challenge, where participants work together to solve a community issue. Hossenlopp said more information, including this year’s theme, will be announced by President Lovell in January.

Previous SIF recipients will be unaffected by the changes, Hossenlopp said. She also said the changes will not affect how much money is given to fund projects, though the Office of Research and Innovation is currently in the process of fundraising.

Aidan Flanagan is a senior in the College of Health Sciences and project director for the Westowne Square Mini Garden, which was a 2017 SIF awardee. He said the proposal process was well laid out on paper, but he had several stakeholders, which made the process more complicated.

“We had to go and speak with each individual person and get their permission to use their name on the proposal after they had already expressed interest and donated time and effort,” Flanagan said. Overall, however, he said the process wasn’t overly cumbersome.

Several campus resources exist to help students submit their own proposals and understand the new Impact Challenge framework. Kelsey Otero is the Associate Director of Social Innovation and one of several staff who work in the 707 Hub, which was a 2015 SIF awardee. She said the 707 Hub offers resources to help students take the next step in preparing for the Impact Challenge.

“We get a lot of students who walk in with ideas, but don’t know the next steps or where to go or how to form a team, or to articulate their idea, and that’s where our staff comes in,” she said.

The Explorer Challenge is now accepting pre-proposals for this year’s competition. The deadline to submit a pre-proposal is Dec. 1