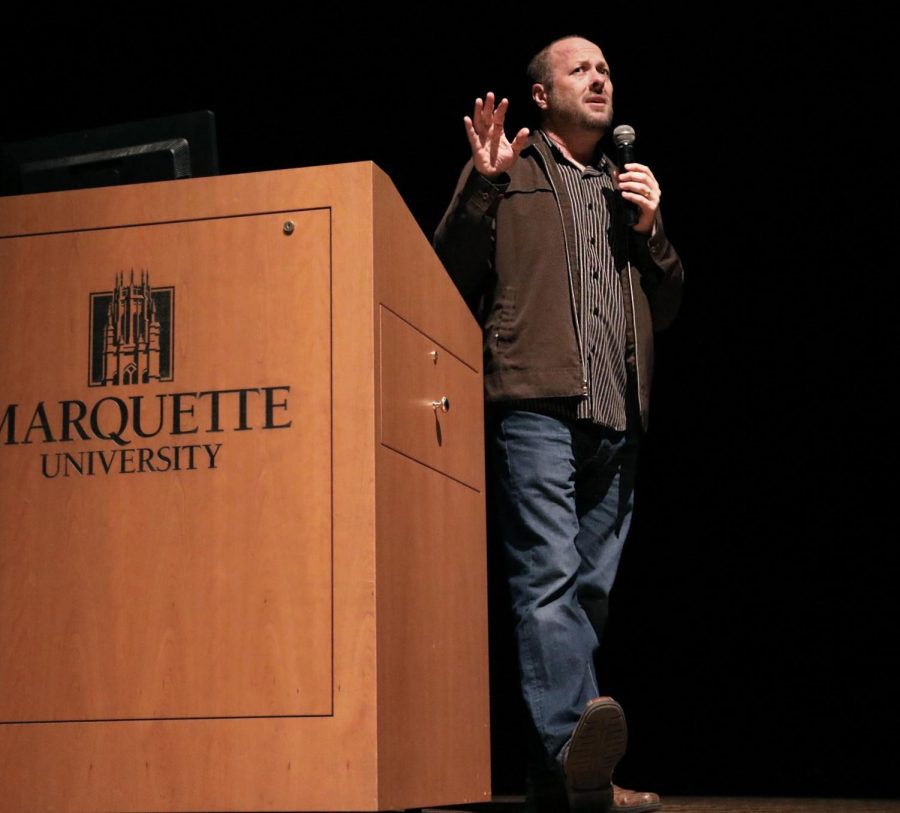 Jay Asher, author of 'Thirteen Reasons Why,' spoke at the Weasler Nov.16.

Author of “Thirteen Reasons Why,” Jay Asher, never expected his book to become a bestseller, let alone a Netflix series. He expected the book to make a small sell, and that many people wouldn’t connect with it.

Ten years after publication, the book flourished into a popular, sometimes controversial Netflix series. Asher spoke about his book, the series based on his bestseller, his personal connection to mental health and the challenges faced by aspiring authors at the Weasler Auditorium Nov. 16.

Talking at events like these has allowed Asher to gain a wider perspective on mental health issues in cultural contexts, he said.

Hannah Baker, a main character in “Thirteen Reasons Why,” commits suicide and leaves behind a set of tapes describing what, and who, led to her death. However, Asher said he didn’t set out to primarily address mental health issues in his book.

“I thought about addressing the issue of mental health, but it would’ve gone against what I was trying to say,” Asher said. “If I had said (Hannah Baker) was clinically depressed or if I had said she was bipolar, whatever I would’ve said, it would’ve made not just the characters in the book, but also a lot of the readers, dismiss everything that happened to her.”

After the series was released in March 2017, criticism erupted surrounding the its handling of suicide. One concern raised by an audience member following Asher’s speech was whether or not “Thirteen Reasons Why” adequately addressed mental health.

Asher said many other books address mental health, and “Thirteen Reasons Why” was not meant to be one of those books.

“You don’t know what goes on in anybody’s life. At this point, (the main character) Hannah might not even know (she has a mental illness). Maybe she does have something, but she doesn’t know and so she’s not even addressing it,” he said. “It was a conscious thing not to mention it because my book is more about how we treat each other.”

Another audience member brought up the series’ graphic portrayal of the main character’s suicide. Asher said it was a critical part of the series.

“For the pivotal moment then to not be shown, it would have been doing what people have done in the past, where it’s (as if) we’re okay talking about all this stuff, but this, we’re not,” he said. “We just felt it needed to be a scene, so that’s it’s not disrespecting that this stuff happens. And it had to be difficult to watch.”

Asher said criticism surrounding his book and the series has been frustrating.

“What’s triggering for one person is not for another … Even talking about it can be triggering for people. It’s like, well then what’s the option? Not talking about it, which then keeps that stigma that this is something we’re not going to talk about,” he said. “If you don’t feel ready to watch it, then you shouldn’t.”

A female relative of Asher’s attempted suicide when she was in high school, he said. When Asher came up with the idea for “Thirteen Reasons Why,” he used his understanding of her experience to write the book in an honest way.

He sat down with his wife and two female friends, took pages of notes about their high school experiences and emotions and developed the book’s main character, Hannah Baker. As a fan of puns, Asher said the book was originally called “Baker’s Dozen” before editors suggested its current title.

Prior to the success of “Thirteen Reasons Why,” Asher faced a lot of rejection from publishers. The book was rejected 12 times, but was accepted by the 13th.

Brianna Jaeger, a junior in the College of Communication, said she enjoyed Asher’s speech and was personally affected by the “Thirteen Reasons Why” series.

“I think people are really interested in hearing why he wrote it and hearing his perspective of the criticism he got. Hearing that it was rejected so much and he still fought for it because he was so passionate about the book, that was really inspiring,” she said.

Jaeger said she plans to read the book after hearing Asher speak.

“I’ve had friends and people who have talked about suicide and it’s a very prevalent thing. I feel like now in society, people are becoming more comfortable talking about it and being upfront about it,” she said.

Molly Welch, vice president of programming for MUSG and senior in the College of Arts & Sciences, said “Thirteen Reasons Why” discusses a modern issues, which is why MUSG wanted him to come to campus as part of their speaker series.

“We decided that we wanted to bring in a group of people that talked about relevant issues that could be really relatable or just were present in students’ lives,” Welch said. Asher’s book, and the Netflix series does just that, she said.

The second season of “Thirteen Reasons Why” is almost done being filmed, Asher said. While his latest book left him unable to visit the set, Asher said he hopes to do so before production finishes.

“Now I can watch the sequel without having to write it because I’m lazy,” Asher said jokingly. “I know what they’re doing with the second season and they’re different issues. What happened in the first season is its own thing and what happens in the second season are the repercussions of that, and as you know, there are lots of things that happen that are left unresolved. Well, now we get to really focus more on those.”