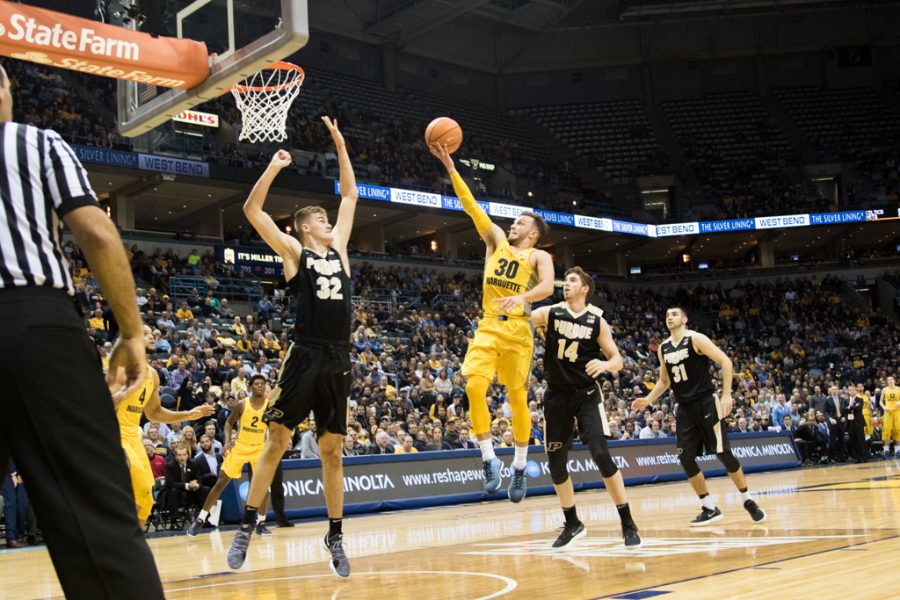 There were moments in Purdue’s 86-71 victory over Marquette when the outcome seemed far from certain. At the 14:58 mark of the second half, Golden Eagle sharpshooter Andrew Rowsey knocked down a 3-pointer to trim Purdue’s lead, which once stood as high as 11, down to one point.

If Purdue were going to fumble the game away, that would have been the time; Marquette was re-energized, and the crowd at the BMO Harris Bradley Center could hardly have been louder. Instead, the Boilermakers counted on their experience and communication to deliver them the victory.

“Our seniors and Coach (Painter) say when it gets loud in there, move the ball, get good shots,” Purdue junior Grady Eifert said. “Don’t force anything. No early shots; you don’t want to take quick shots because they can get it out quickly and push it.”

The Boilermakers hit 12 of their next 14 shots after Rowsey’s 3-pointer. Purdue also drastically improved its ability to get to the free throw line, generating 22 of their 23 free throw attempts in the second half.

“We were getting to the paint a little bit more,” senior Dakota Mathias, who finished with 10 points, said. “Isaac (Haas) was drawing a lot more bodies. We were moving the ball, and we got it low a couple of times and they had no choice but to foul.”

Coming into the game, Purdue was most concerned with Marquette’s ability to hit 3-point shots. The Golden Eagles, who shot a country-best 42.9 percent from beyond the arc last year, did nothing to disprove those concerns, hitting on 11-of-27 threes against the Boilermakers.

“We knew last year they were really, really good, and we knew we had to stop them in transition,” Eifert said. “They set those picks, and they’ll pop out. We worked on that the whole week. Just talking on defense was huge.”

Purdue was much more confident in its ability to beat Marquette with offense. Not only were the Boilermakers also one of the ten best 3-point shooting teams in the country last year, but they have a pair of players that are over seven feet tall: senior Isaac Haas and redshirt freshman Matt Haarms.

This created a situation where Marquette had to choose between doubling whichever big was in the game, which left the perimeter shooters open, or single-covering everyone and leaving mismatches in the paint. Marquette chose option two for most of the night, which led to Haas finishing with a team-high 22 points on 8-of-14 shooting.

“That was kind of surprising,” Haas said about Marquette not double-teaming him. “They did it all of a sudden at once, and it kind of threw me off guard, but then after that, we just kind of picked them apart. They’ve just got to pick their poison honestly.”

Once Marquette started double-teaming Haas off of entry passes, it forced him to rely more on his passing. From a statistical standpoint, it seemed like a solid plan; Haas barely averaged half an assist per game last year. However, Haas had improved his passing ability in the offseason and was able to show it off down the stretch, notching two assists and firing off several more passes that either led to open shots or a drawn foul.

“He was doing a really good job of just being simple with the ball,” Mathias said about Haas. “He didn’t try to force anything.”

The only thing Marquette did to limit the Boilermakers’ frontcourt effectiveness was to get them into foul trouble. Both Haas and Haarms picked up two fouls in the first half. In order for Purdue to stay at maximum effectiveness, Haas knew he would have to avoid taking on more fouls.

“I just made stupid plays, I guess … just mental mistakes,” Haas said about his first half performance. “When you tighten up on those, you don’t make the same mistakes anymore in the second half. Pretty easy fix.”

Although Purdue had dominated its opening opponents — SIU-Edwardsville and Chicago State — by more than 30 points, neither of them were anywhere near the caliber of Marquette. Going into a hostile stadium and beating a potential NCAA Tournament team was a major step forward, Haas said.

“I think we stayed pretty level-headed through it all. We just kind of grinded it out, moved the ball when the crowd got loud and quieted them down. We made good plays and eventually just pulled away with it at the end.”