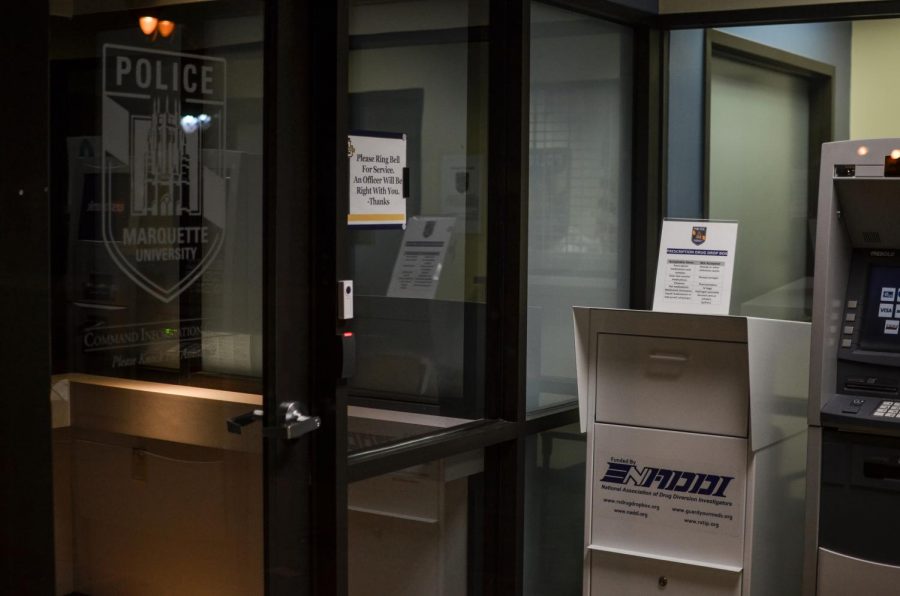 MUPD installed a prescription drug drop box outside their office.

The Marquette University Police Department installed a prescription drug drop box in the lobby of their office in support of the Dose of Reality initiative from the Wisconsin Department of Justice.

Combatting the opioid epidemic is a focus of the DOJ under Attorney General Brad Schimel. The Milwaukee County medical examiner has confirmed a total of 309 overdose deaths from drugs, including opioids and heroin, as of an Oct. 27 report by the Milwaukee Journal Sentinel.

“Opioid abuse has become an epidemic, both locally and nationally,” MUPD Chief Paul Mascari said. “Since opioid addictions often stem from prescription drugs, providing a means to safely dispose of expired or unused medications is just one way MUPD can make a difference in our local community.”

The campaign also offers advice for students and young people. Some examples include such as saying “no” when someone offers pills that were not prescribed for them, encouraging correct disposal, never offering painkillers to others, locking up prescriptions safely and warning friends of the dangers of abusing prescription painkillers.

Unused or expired prescription medications should not be flushed or poured down the drain, as they may contaminate the water supply.

When used incorrectly, prescription opioid killers have a high risk of addiction. Four of five heroin addicts start by abusing prescription painkillers, according to Dose of Reality. In Wisconsin, more people die from painkiller overdoses than all other drugs.

“(The drop box) is a good idea and step in the right direction, as there is a huge issue of doctors over-prescribing painkillers,” Grace Goebbert, a freshman in the College of Nursing, said. “This allows anyone to get rid of the extras before it gets in the wrong hands, plus it’s a safer alternative for the environment than just throwing them out or flushing them down the drain.”

The Dose of Reality campaign won awards such as the Business Marketing Association’s Bell Award and a Gold ADDY by the American Advertising Federation of Madison.

“Since Dose of Reality’s launch in September 2015, it has shattered the myths about prescription drug abuse and raised awareness about the dangers of drug overdose,”Attorney General Brad Schimel said in a press release. “I am proud that Dose of Reality is being recognized by subject matter experts for the prevention tactics we have used to bring attention to one of our state’s most pressing public safety challenges.”