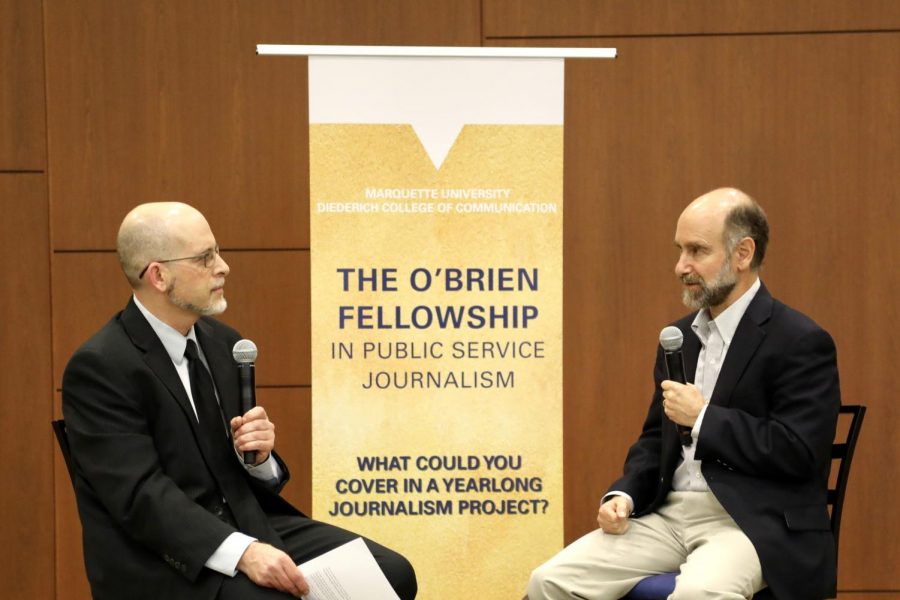 Hosted in Eckstein Hall, the O'Brien conference focused on Pulitzer Prize winner Mark Johnson’s (left) series “Outbreak,” which he worked on with Marquette students as part of the fellowship. Johnson interviewed Nobel Peace Prize winner Dr. Jonathan Patz (right,) who currently serves as the director of the Global Health Institute at the University of Wisconsin-Madison, about the relationship between animal to human diseases.

Topics of disease and climate change collided last Thursday at the fifth annual O’Brien Fellowship conference. The College of Communication sponsors the conference each year to exhibit and discuss the fellows’ projects.

The Perry and Alicia O’Brien Fellowship in Public Service Journalism is a program which funds professional journalists for an academic year. The fellows work on a single, long-form project during that time, and they are provided with university resources such as faculty experts and student interns.

“Outbreak” explores diseases that jump from animals to humans.

“These diseases aren’t just Africa’s problem, or Asia’s or South America’s. They’re our problem, too,” Johnson said. “Now, more than ever before, a virus that brews thousands of miles away can reach the U.S. in a day, even less.”

Johnson interviewed Nobel Peace Prize winner Dr. Jonathan Patz, who serves as the director of the Global Health Institute at the University of Wisconsin-Madison, about the relationship between animal to human diseases.

The second half of the conference presented a panel of the journalists behind “Outbreak.” The panel included Mark Johnson, Marquette alumni Devi Shastri and Ryan Patterson, senior in the College of Communication McKenna Oxenden and photojournalist Mark Hoffman. They reflected on their time working on the project, as well as the fellowship itself.

“O’Brien is an opportunity unlike any other. There’s literally not another program in the country that’s like it,” Oxenden said. “You’re getting paired with a working journalist in the industry. No matter what, you’re going to gain a mentor.”

The fellowship began in 2013, when Peter and Patricia Frechette gave over eight million dollars to the College of Communication. This enabled the university, in conjunction with the Milwaukee Journal Sentinel, to found the fellowship.

Patricia Frechette died last fall, and Peter Frechette died this February. The Dean of the College of Communication Kimo Ah Yun dedicated the conference to the couple, praising them for their passion for public service journalism and commitment to the fellowship.

“What the O’Brien Fellowship does is present an incredible blessing in the world of journalism,” Greg Borowski, deputy managing editor at the Milwaukee Journal Sentinel, said. “It gives you the time away, it gives you access to the resources and researchers and professors at Marquette and it gives you the students. Mark couldn’t have done the project in a year on his own.”

Dave Umhoefer, Pulitzer Prize winner and the interim director of the fellowship, said he remembers being an O’Brien fellow two years ago as a transformative time in his career.

“I learned that just having that time to think and having the resources allowed me to take my journalism to a whole other level,” Umhoefer said. “It’s exciting to see that happen with the other fellows and to see the students really mature and take on these really high standards.”