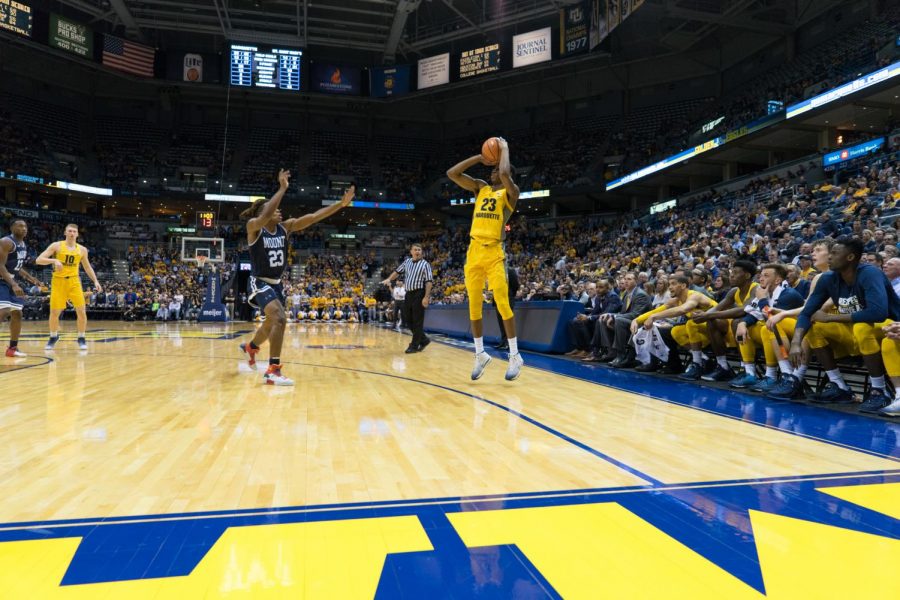 “He’s a talented player,” Christian said prior to Friday’s contest. “I haven’t seen him in a couple of years, so I’m looking forward to shaking his hand before (and) after the game.”

Rowsey responded to the handshake with a 23-point performance en route to Marquette’s 80-59 win in their season-opener.

“He was very good, especially in the first half,” Marquette head coach Steve Wojciechowski said. “He was really sharp, made some exceptional passes and hit some high-quality shots, so Andrew is a huge key on our team.”

The Lexington, Virginia, native scored his 23 points on uber-efficient shooting from the field, going 7-for-16 and 6-for-7 from the charity stripe. He was 3 for 8 from beyond the arc.

“Andrew is a terrific player. He can do it all,” redshirt sophomore Sacar Anim said. “He did a really good job facilitating and getting us into our offense.”

Junior Matt Heldt did not waste any time on offense as well, scoring his first three points within the first 12 seconds of the game, getting a basket and the foul. Heldt came three points short of his career-high 16 points last year against St. John’s. His offense helped MU grab a 40-24 advantage in the paint.

“People are honoring our 3-point shot,” Wojciechowski said. “And so what that does is it leads to driving opportunities and I think our guys really drove the ball well. We got good post play from Matt and Theo.”

The dominance down low resulted in more free throw attempts made (16) than Mount St. Mary’s attempted (11).

While Rowsey’s sharpshooting made headlines offensively, Marquette’s ability to neutralize a normally-potent Mount St. Mary’s 3-point shooting team eliminated any chance of an upset. Christian expects his team to attempt 35 triples per game. The Mountaineers attempted only 28.

“This is a team that in their last game hit 17 threes at a really high percentage and in the game before that hit 12,” Wojciechowski said. “So to hold them to 25 percent shooting from the 3-point line was a very positive development.”

Much of this was because of the team’s ability to shut down Mount St. Mary’s pick-and-roll game.

“I think our pick-and-roll defense was good,” Wojciechowski said. “A big part of that was matt Heldt. I thought he was exceptional on the defensive end.”

The one silver lining for Mount St. Mary’s was Junior Robinson. The senior guard scored or assisted on 34 of the Montaineers’ 59 points.

Haanif Cheatham quietly put together a nine-point second half showing to match Heldt’s 13 points. That’s the most points Cheatham has had since National Marquette Day Feb. 18 against Xavier. Markus Howard scored 11 after missing practice this week with a sprained ankle.

“When I saw (Howard) at shoot around today, he said he felt like he could go,” Wojciechowski said. “He hasn’t been out on the floor in practice since Lindenwood, so for him to be able to play 25 minutes after not really practicing for a week and do a good job was positive.”

Wojciechowski and company will not have long to dwell on the win, hosting 20th-ranked Purdue Tuesday as part of the Gavitt Games. This will be the first time Marquette has faced Purdue since 1969. The Boilermakers have won all eight matchups.