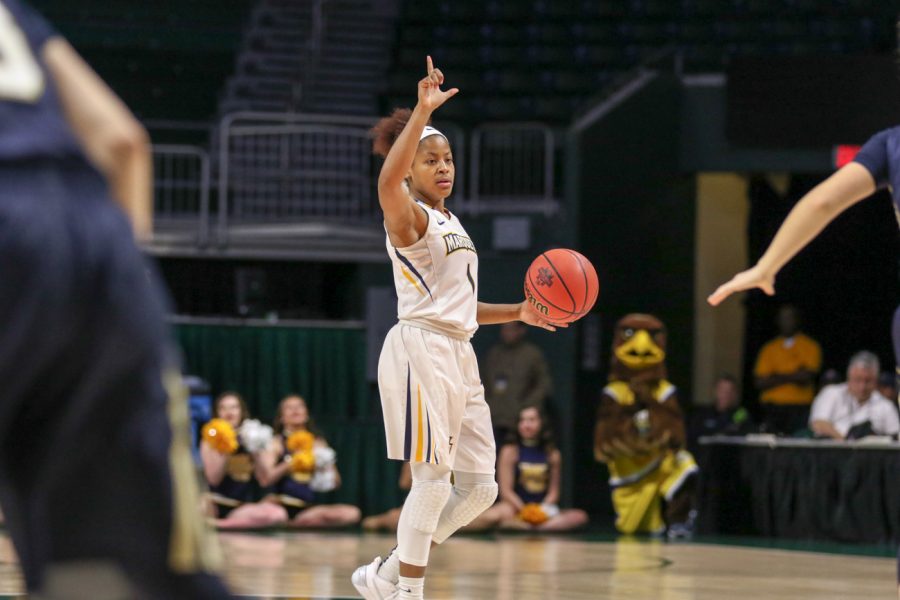 Women’s basketball point guard Danielle King enrolled in another college between her freshman and sophomore seasons, although she quickly returned to Marquette. And though she did not have any transfer credits to show for it on her academic transcript, King’s newfound knowledge translated perfectly to her on-court game.

During the summer of 2016, King attended Point Guard College, a basketball camp. The national program is designed for elite guards, with a syllabus stressing advanced X’s and O’s, angle seeking and pace-setting skills. It’s like getting a Ph.D. in playmaking.

“I had never been in anything like that,” King said. “It was like a school, a classroom thing, but just for basketball and point guards. It was really deep, and I really learned a lot.”

A year removed from the summer schooling and an offseason after a BIG EAST championship, King is ready to return to the court and be a leader once again for the Golden Eagles. On a team known for a blazing-fast offense, filled with a bevy of offensive stars, King is the piece that makes it go, the combustible catalyst that can rocket the offense from zero to 60 in just a couple dribbles and a quick, creative pass.

“Coach always tells me ‘attack first, attack first,’” King said. “I’m always in attack mode, and once you draw people to you, it opens up the floor for everyone else. I don’t have to score 20 points a game, but did I put my teammates in the right position? I’m happy as long as team did good as a team, and it translates to a good game.”

King led the team in assists last season at four per game, a stat that accounted for roughly a quarter of the team’s assists and was good enough for fifth overall among BIG EAST players. The point guard was tied with fellow junior Natisha Hiedeman for most minutes played per game at 32.9 last season. It’s a testament to her skill, and it’s indicative of the extent to which head coach Carolyn Kieger trusts her floor general.

During an open practice held for media Nov.1, Kieger bemoaned the clunky offense as King was off the floor with the training staff. Kieger, a prolific point guard when she played at Marquette from 2003 to ’06, shares a unique connection with her starting point guard.

“I think, from a point guard’s perspective, I see the game from how (the position) plays it,” Kieger said. “We do a lot of film work, a lot of communication lessons. We’re trying to make (our guards) the best possible vocal leaders they can be.”

For King, having a former point guard as a coach is like having a professor from Point Guard College around full-time.

Though classroom settings and the film room have taught King a lot about how the game works, Kieger’s presence has brought out one set of intangibles King says is the most valuable of all: leadership.

“She’s really helped me grow as player and as a person in a leadership role,” King said. “She’s a really aggressive leader, and I was kind of in my shell when I got here, and she’s really brought me out to another level.”