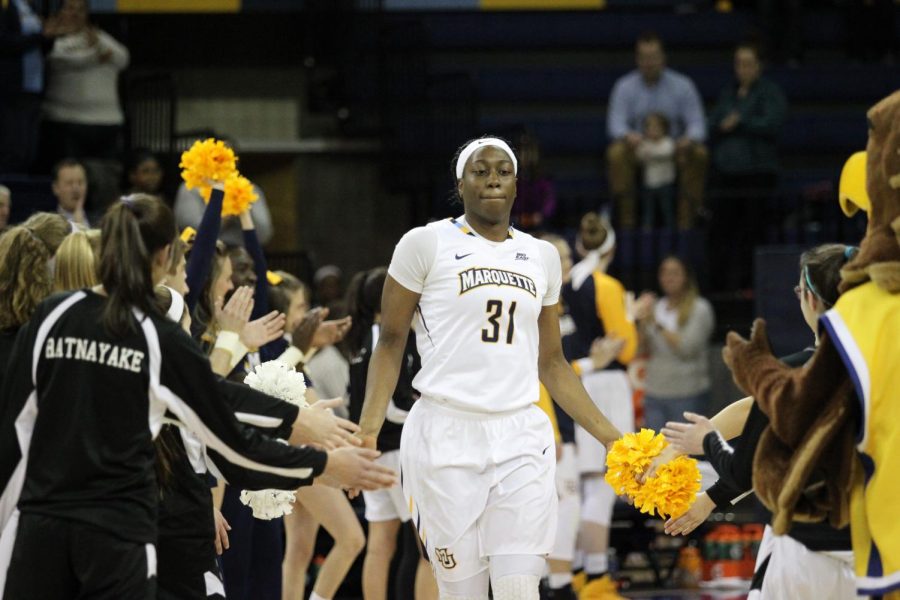 Senior center Shantelle Valentine has seen her playing time decrease, but her leadership role increase over the course of four years with women's basketball. (Photo courtesy of Marquette athletics.)

Shantelle Valentine’s freshman year was bleak, to put it bluntly. The Golden Eagles went 9-22, and it appeared that there was no end to the losing in sight.

Two years later, Marquette is the unanimous choice to win the BIG EAST and Valentine is the team’s lone senior. The center from Brampton, Ontario has seen the program’s younger players mature, particularly juniors like Allazia Blockton and Natisha Hiedeman.

“I was a sophomore when they came in, so we all lived together in the dorms,” Valentine said. “They have grown a lot since freshmen year.”

During Valentine’s sophomore year, the team was the youngest in the country; eight of 11 players were freshmen. Valentine and now-graduated forward McKayla Yentz were the only players that played any minutes for Marquette the prior season.

Despite that, head coach Carolyn Kieger expected excellence out of her players.

Although Valentine doesn’t put up major numbers, averaging 11.8 and 2.5 points per game, Kieger still views Valentine as an asset to the Golden Eagles.

“She’s a great leader; she leads by example but gets vocal when she needs to,” Kieger said. “I’m really proud of the player she’s developed into, but more so, the leader and the character she’s been able to enforce with our team.”

Valentine knows her role as leader is an important one, and she’s willing to do whatever it takes to help Marquette.

“It’s really whatever is best for Marquette,” Valentine said. “I think everyone has their role at Marquette, and if my role is going to be defense and it’s going to be rebounds over a total amount of points, then I’m completely fine with that.”

Kieger expressed the need for communication during practice. She showed frustration as the team turned the ball over repeatedly and fell silent at crucial times during possessions. Afterward, Valentine admitted she needed to do better in that respect.

“I think I need to do a better job of being vocal 100 percent of the time because I think I’m a vocal leader,” Valentine said. “I can talk and lead by example, but I think I need to be more consistent with that, and vocally that’s going to set us apart from other teams.”

Talking is a crucial component of the thing Kieger preaches most and that Valentine exemplifies: selflessness.

John Steppe contributed to this report.