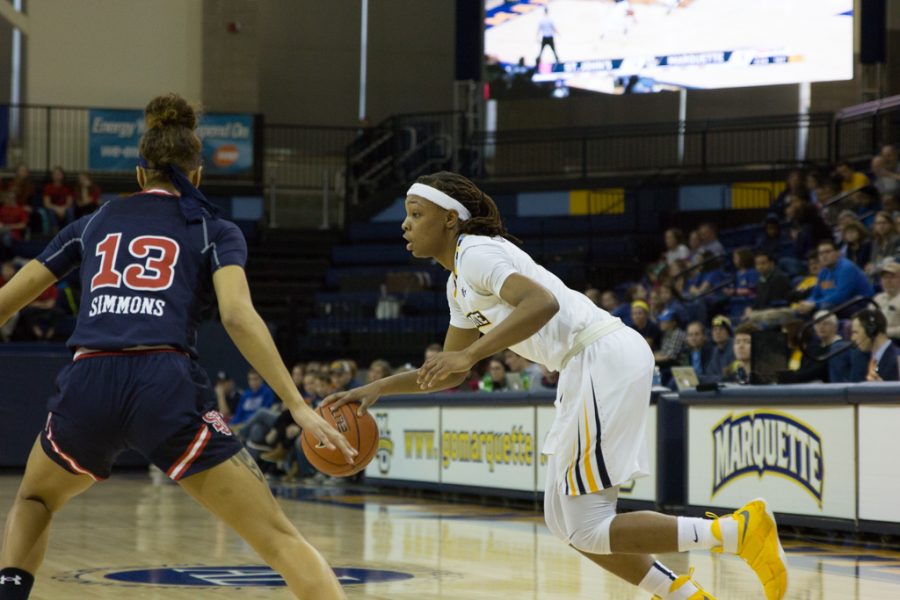 Junior guard Allazia Blockton prepares to drive to the hoop against St. John's.

The former NCAA champion and Olympic gold medalist has spoken to countless teams before, but there was one player in this group that stood out.  Freshman guard and current head coach Carolyn Kieger, unintimidated by the basketball legend and the upperclassmen around her, introduced herself to Lobo.

Fifteen years later, there’s another Marquette player catching Lobo’s eye, one that could be good enough to surpass Kieger and make it to the WNBA: junior guard Allazia Blockton.

“She’s a really good athlete,” said Lobo, one of ESPN’s top women’s basketball analysts. “Not only is she a really good scorer, but gets her teammates involved (and) has good assist-to-turnover numbers. So I would say she’ll definitely be on people’s radars in terms of watching her over the next two seasons.”

The former top 100 recruit is on pace to become Marquette’s all-time leading scorer and was the second Marquette player to earn an All-American honorable mention from the Women’s Basketball Coaches Association. She averaged 17.1 points and six rebounds per game in 2016-’17.

“Anytime there is a player who has the ability to score, who is a good athlete, who has quickness and — as coaches like to look at it — has a great upside, they definitely have WNBA potential,” Lobo said. “And she kind of fits all of those bills.”

Kieger, also one of Marquette’s 1000-point scorers, considers Blockton one of the best guards she has ever coached.

“She’s one of the most talented scorers I’ve ever coached or ever seen for that matter,” Kieger said. “She obviously still has two years to develop, but the sky is obviously the limit.”

Blockton and Lobo both view defense as the next step in the Milwaukee native’s progression toward a pro basketball career.

“In the WNBA, you have to be able to play both ways,” Lobo said. “You have to not only be strong offensively but strong defensively as well. As she continues to mature on that side, it will help.”

Blockton matches up against fellow junior Danielle King, a much faster guard, in practice to improve her defensive quickness.

“The next level is not about scoring, because everyone can score,” Blockton said. “It’s about who you can defend, so I’ve really been trying to guard the best guards on our team.”

Even if Blockton dramatically improves her defensive prowess in 2017-‘18, an early departure from Marquette for the WNBA Draft is highly unlikely. Lobo described this year’s senior class as “one of the top classes in a really long time, if not ever, coming into the WNBA Draft.”

A WNBA career first emerged as a long-term possibility for Blockton her freshman season. She struggled keeping up with conditioning and training at the Division I level, although the growing pains did not show in her 18.7 points per game total.

“I struggled when I first got here with conditioning and lifting and actually scoring the ball,” Blockton said. “So after a highly successful season freshman year, I was like, ‘Hey, maybe I can actually go to the WNBA.”

Since then, her chances of going pro have remained on her radar.

“If I get the opportunity to play WNBA, I’m definitely going to take it and play overseas too,” Blockton said. “So I’m trying to play basketball as long as I can, but I come out of here with my degree, so I’ll always have a backup plan.”

Blockton is well aware that she could be one ACL tear away from a precipitous drop in her draft stock, which is why the College of Communication student and two-time Academic All-BIG EAST honoree uses her degree as plan B.

“I know I’ve had a couple great years at Marquette,” Blockton said. “And no matter how many people come telling me, ‘Yeah, you’re going to the WNBA,’ nothing’s given. Anything can happen.”

There’s a much different atmosphere surrounding the Golden Eagles this season compared to her first two on campus. Marquette enters the season as the unanimous BIG EAST preseason favorite two years after being picked to finish seventh.

“As long as players can play, the coaches and GMs are aware of them, but that doesn’t always mean the fans always are,” Lobo said. “I know Marquette always has a great fan base for their women’s team, but it’ll be nice if fans around the country are more aware of them just because they should be really, really good.”