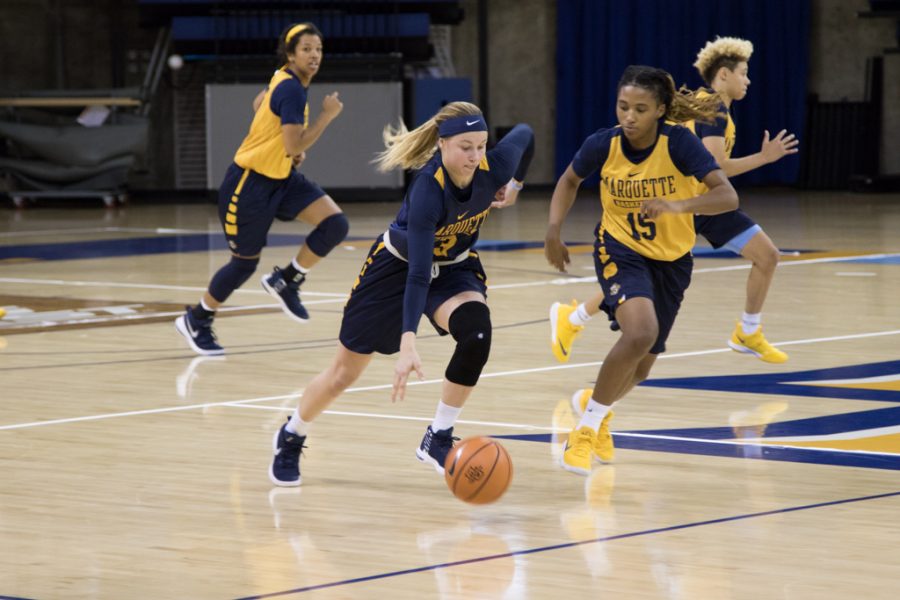 Marquette finished in the bottom fourth of the country in defense.

There was a moment of deja vu at women’s basketball media day this year. The moment came when head coach Carolyn Kieger was asked what her team worked on during the offseason.

A year ago, Kieger had almost an identical answer to a similar question, but the answer still applies after the team finished ninth in the BIG EAST in scoring defense last season. However, Kieger is taking a different approach to defense this year.

“We are now going to be aggressive in the half court, just like the full court,” Kieger said. “So, we are getting up into passing lanes, we are going to play pressure defense, get after the ball handler a little bit more and put some pressure on 90 feet.”

The new defensive formula comes with an effort to limit opponents’ field goal percentages, specifically their effectiveness from beyond the arc.

“Our goal this year is to have teams shoot under 35 percent,” junior guard Allazia Blockton said. “So, obviously that is going to be kind of hard to do, so we are really working on keeping teams out of the lane because if they get in the lane that is an easy layup or bucket.”

Part of the reason opponents had high shooting percentages against Marquette was because the Golden Eagles gave up the most shot attempts and the most 3-point attempts in the conference, a side effect of the team’s fast offensive tempo.

“We play so fast that teams are going to have multiple possessions,” Kieger said. “For us, we want more steals this year, we want more deflections, which hopefully eliminates shot attempts, but at the same time we want the teams to shoot the shots we want them to shoot versus what they are comfortable shooting.”

One big addition that will help the Golden Eagles’ defense will be freshman guard Selena Lott. Kieger said she thinks Lott “is one of the best defenders in the whole entire country.”

In addition, the Golden Eagles returns the same core of players, making the new defensive mindset easier to implement.

“They’re older, they’re wiser and now they know where they are supposed to be,” Kieger said. “We might not always make the right play or finish the play, but we are a lot farther along than the last two seasons with knowing where our personnel should be and where you should be at one specific time during the possession.”

“It is night and day from where we have been defensively,” Kieger said. “Obviously a long way to go, but I’m excited because I think we will be able to defend much better than we have the in the past.”