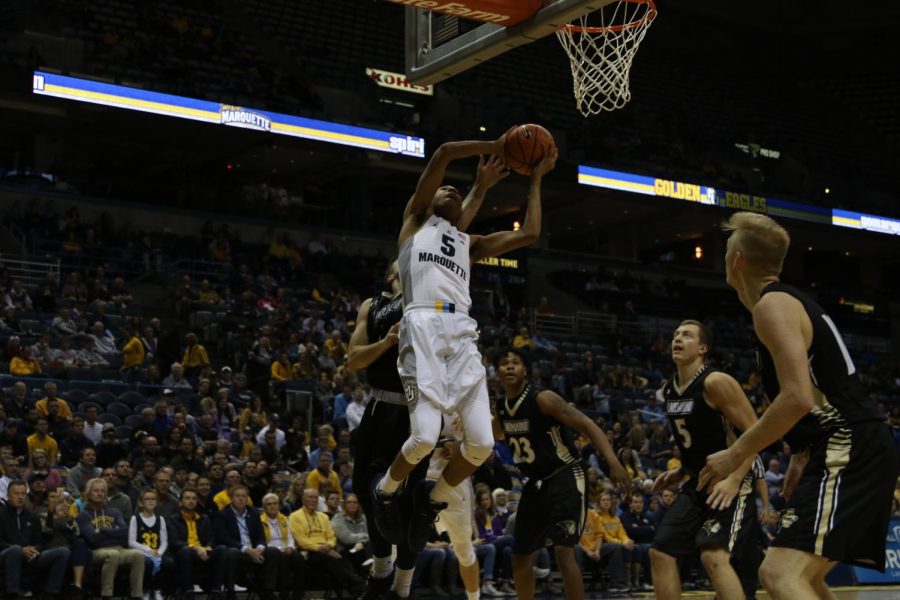 Marquette knew entering the season that defense would have to be a priority. The team exclusively focused on defensive drills for the first two weeks of practice, not even touching a basketball.

That defensive progression had a hiccup Saturday, though, as Marquette barely edged out Lindenwood, 81-79, in an exhibition game at the BMO Harris Bradley Center.

The Division II school from St. Charles, Missouri, had multiple chances to win the game in the final seconds. With nine seconds left, Lions guard Jackson Price missed a contested layup. Markus Howard, who shot 88.9 percent from the charity stripe last year, got the rebound and was fouled. He hit both free throws.

Down four, Lindenwood guard TJ Crockett tipped in teammate Brad Newman’s missed 3-pointer. After a botched inbound off freshman Greg Elliott’s leg, the Lions had one last chance coming off a timeout with 0.7 seconds left. Price’s 3-point attempt from the corner on the inbound missed by about an inch, securing the Marquette victory.

While Marquette’s defense stepped up at the end, that was the exception to the rule. Marquette allowed Lindenwood to shoot 56 percent from the field and 54 percent from three-point range.

“They had us all over the place this game,” Cheatham said. “They were just knocking down contested, crazy shots.”

An area of strength last year – 3-point shooting – was abysmal for Marquette. The Golden Eagles shot four for 20 from long range. Haanif Cheatham and Sam Hauser were the only ones to hit a 3-pointer.

Cheatham was 3-for-4 from long range, a stark contrast from his 33 percent 3-point shooting last year.

“All summer I tried to add a little something to my game,” Cheatham said. “The work I put in was able to show.”

“There are going to be days where you don’t shoot well,” Wojciechowski said. “You have to find a way to win and that’s defensively and that’s other guys stepping up.”

Marquette’s nonexistent 3-point shooting coupled with defensive shortfalls on the perimeter allowed the Lions to lead the game for almost 26 minutes. Those minutes came almost exclusively in a stretch starting at the 14:57 mark in the first half with a 3-pointer by Crockett. Marquette would not have the lead again until the 9:17 mark in the second half, when sophomore Sacar Anim’s layup put Marquette ahead, 62-61.

“Our ability to keep the ball in front of us put us in constant positions where we were having to rotate,” Wojciechowski said. “We had to be able to defend the ball and keep it out of our paint.”

Anim finished with 14 points, almost half of which came in the final 13 minutes of the game.

Hauser led the team with 20 points including 7-for-8 shooting from the free throw line. Cheatham closely followed with 17 points. This was Cheatham’s first game since injuring his right shoulder.

After playing four minutes in the first eight minutes of the first half, freshman Theo John missed the rest of the game. It was a coaches’ decision, per Marquette athletics. Wojciechowski attributed it to a mix of Lindenwood’s ability to spread the floor and John’s ongoing recovery from an ankle injury.

“This is a real hard team to play against because they really space the floor,” Wojciechowski said. “He just has to work himself back into shape after having all those days off and get his ankle better.”

Marquette will have a five-day break until its next contest Friday against Mount St. Mary’s. The Mountaineers were a no. 16 seed in last year’s tournament.