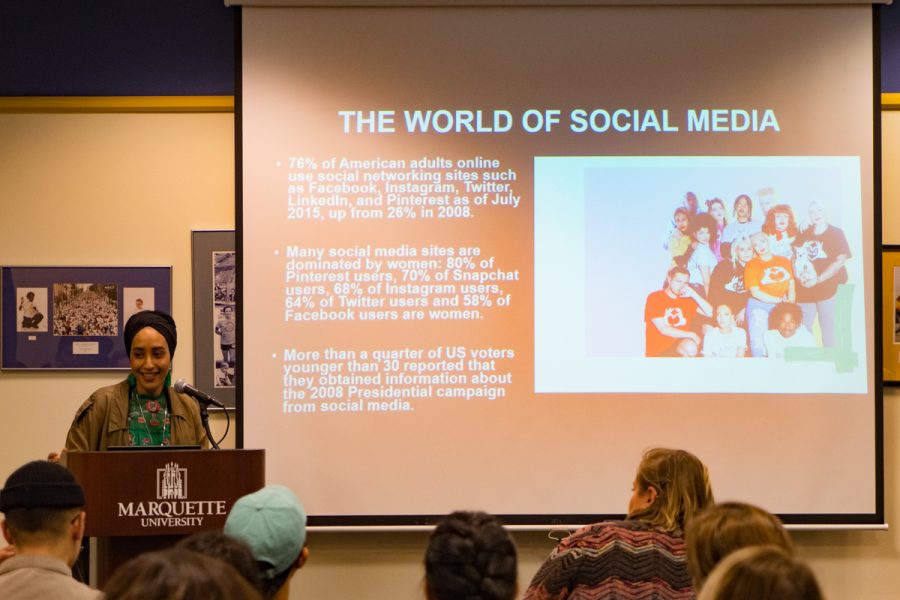 Mariah Idrissi spoke to students in the AMU.

Mariah Idrissi, the first Muslim model to be featured in an H&M promo, spoke at a presentation in the Alumni Memorial Union Oct. 30.

The presentation explained the evolving roles of inclusion in fashion, the importance of representation in the field and her experiences being a western Muslim in London. She also expressed how there is a disconnect between women of all color in the industry, not just Muslims.

Idrissi, who is also an advocate for humanitarian projects, was approached by a casting director in 2015 for an H&M campaign promoting diversity and recycling clothing. When the photos were released, Idrissi saw there was a shockingly objectifying attitude towards Muslims.

“I like the way things are going in fashion as there are statistics showing that women of color have been used more on runways since 2015,” Idrissi said. “We are seeing a gradual progression of inclusivity of different races, but I would also like to see more women of color behind the scenes as designers or editors.”

While explaining her experiences as being an older model in the industry at the age of 25, Idrissi spoke about the importance of embracing the fact that people do not always fit in.

“The hijab isn’t the typical American norm, and we are hoping to present it through a new lense and look at how femininity and identity are beautiful in their own ways, not through societal standards,” Chrissy Nelson, program assistant for the center for gender and sexualities studies, said. “By promoting this fashion event, we are hoping that students and community members can help break down the barriers and understand womanhood in different lines.”

The presentation touched on the impact of social media, especially hijab-wearing bloggers influencing young girls. Despite the negatives, Idrissi said she believes social media is an important tool to counteract the mainstream media.

Seventy-six percent of American adults are on social media and many of the platforms are dominated by women, which is why she believes these sites should be viewed differently, Idrissi said.

Through networking and speaking with other models, Idrissi said she no longer sees the fashion industry in the same way and is able to read in between the lines when analyzing advertisements. Her frustrations come from the fact that industry people feel the need to oversexualize everything, and no one speaks up when there is money or a job opportunity on the line.

Students were able to ask Idrissi questions about her work and many of them revolved around life with a hijab, opening up conversation.

“I hope this allowed (attendees) to be more comfortable with people who wear (headscarfs) and ask the questions they have and not be afraid of it,” Nuriyah Rasool, a sophomore in the College of Arts & Sciences, said. “Events like this are important because they create awareness, normalize the differences and expose people to different outlooks.”