Jarosz ‘at peace’ with decision to step away from playing soccer, becomes student assistant 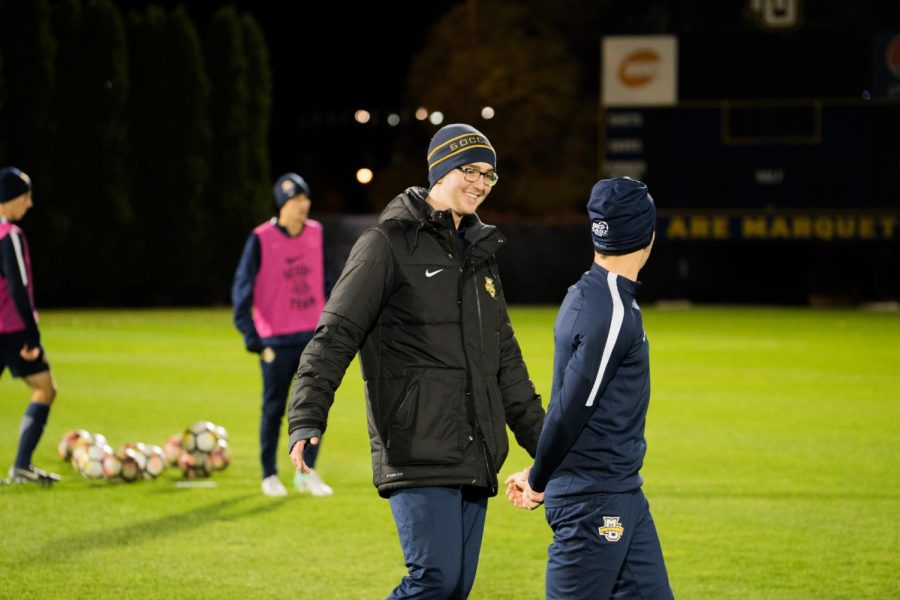 Danny Jarosz (center) talks to student manager Michael Gallo during an evening practice. Jarosz is in charge of filming every match and submitting it to InStat for a film breakdown.

Danny Jarosz gets ready for game days just like the rest of his teammates, but when they take the pitch, he goes up to the press box. Multiple concussions ended his playing days a year ago.

He couldn’t stay away from the program that made him a stout defender and a better teammate. Jarosz is now a student assistant, striving to be a future head coach in the game that has given him so much.

“I committed to them for four years, and they’ve also done that for me as well,” Jarosz said. “The coaching staff and medical staff have given back that commitment for sure. I felt that if they were going to go out of their way and go above and beyond to help somebody who’s in a tough situation, then I felt that I had to do the same.”

Jarosz is open to telling his teammates about his story. He fully acknowledge his career’s devastating end. Jarosz is still fighting his demons and going through final bouts of headaches and pain. But he’s not alone in his struggle.

“My faith has helped me get through a lot of it,” Jarosz said. “There is a bigger picture, and knowing that soccer isn’t everything. I’m on this earth to impact others and impact people and coaching is going to be the best way to do that.”

Head coach Louis Bennett said while Jarosz is able to break down the film and go through the X’s and O’s of soccer, his ability to maintain relationships with players is what makes him an effective coach.

“It’s a strange profession, coaching,” Bennett said. “People love you when you win and hate you when you lose, and he’ll develop a thick skin if he hasn’t already.”

Jarosz still goes through emotions many Division I soccer players go through, but there’s one key difference now: he’s no longer in control.

“When you are playing, you feel so in control. Now, from the other side, when you’re outside the white lines, not everything is in your control.”

When the coaches discuss tactics and possible areas of improvement, Jarosz is right there with them.

This can be awkward as a student.

“Its been tricky when you are with the other coaches,” Jarosz said. “I prefer to stay out of some meetings and remain almost neutral because then you got to go home, and you’re roommates with the guy you were just kind of talking about.”

One relationship that hasn’t changed much is the connection to Bennett.

“Coach B is coach B,” Jarosz said. “Every move he makes is a lot of thought, and he has taken me through his thought process as well at times … he puts in 110 percent.”

Bennett looks at Jarosz like a son. After all, he’s known Jarosz since he was eight years old.

“Danny has always been a cerebral player who thought about the game,” Bennett said. “He was dealt a couple of really tough blows, where if those kinds of issues don’t turn you off of something, it means you’re in love with it.”

Along with honoring the four seniors on the roster this year, Louis Bennett and his staff had a special surprise for Jarosz: They informed him during the previous day’s practice he would be honored as well. In a year full of ups and downs, Saturday night came full circle for Danny Jarosz, saying that he is finally “at peace with his decision.”

“I was certainly a little surprised and didn’t expect to be able to go out with those guys who are still playing,” Jarosz said. “It really didn’t hit me until I was walking onto the field again. I heard my name for the last time, and I think that shaking their hands is something that I’ll remember for a long time.”