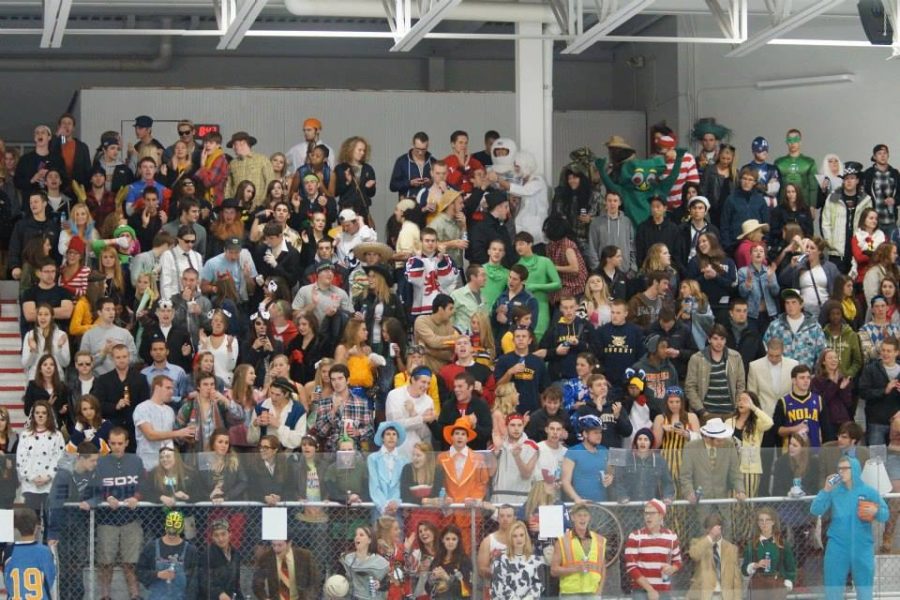 The Marquette men’s hockey team fared well last weekend, winning its home game and tying its away game against University of Wisconsin-Madison.

Winning against a rival is always meaningful, but doing it on Halloween weekend in front of a packed student section added extra importance.

“It really amps up the team and the boys to put on a show,” junior defenseman Adam Gesior said. “We had three full buses. When we get that many fans, it inspires us to play our best level of hockey.”

Gesior had his first goal of the season in the team’s 6-4 victory over the Badgers at The Ponds at Brookfield last Friday. Gesior said the atmosphere was a motivator to play harder.

“We like to put our best foot forward for the fans,” Gesior said. “Whether that’s scoring goals or keeping them excited, we like to keep our fans in the game.”

The team has to do its own funding, so providing three buses for fans comes partially out of player’s pockets. Providing fans with transportation to The Ponds of Brookfield for this game was a big step in providing a rowdy atmosphere.

Steve Novotny, sophomore in the College of Engineering, came to the game dressed as Rick from the show “Rick and Morty” and was excited to be a part of the Marquette crowd. This was his first look at the team, and being a long time hockey fan, he jumped at the opportunity to go in a costume.

“I used to go to all the hockey games in high school,” Novotny said. “So I figured it would be a blast with all the costumes,”

Caolan Lyons, a sophomore in the College of Engineering, was also in the student section. He learned about the game from friends on the team and knew this game was one he couldn’t miss.

“This is a good club team that’s very competitive,” Lyons said. “It’s a good time to watch (the team), have fun with the fans … and the after-game celebrations really bring everyone together.”

After a bump up to Division II, Marquette played the 8-1 Wisconsin Badgers, instead of the usual Milwaukee Panthers. The pressure was definitely on.

“When you see your friends or that girl you got a crush on in the stands, you kind of want to show off for them,” junior forward Mike Desalvo said. “The atmosphere is a lot higher, and you really want to show what your team is made of.”

The Golden Eagles may add more fans to the stands if they keep up their steady performance, as they’re tied for third in the division with Robert Morris and DePaul. The Blue Demons will come to The Ponds for a critical two-game series next weekend.

On Friday night, though, the players’ thoughts were not on next weekend, but on the electric atmosphere in the arena.

“Just having everyone there and being able to play in front of your friends is something I never really did until I came to MU,” junior Colin Redman said. “I really like having the support, and just having someone say, ‘Hey, great game!’ means a lot to me.”