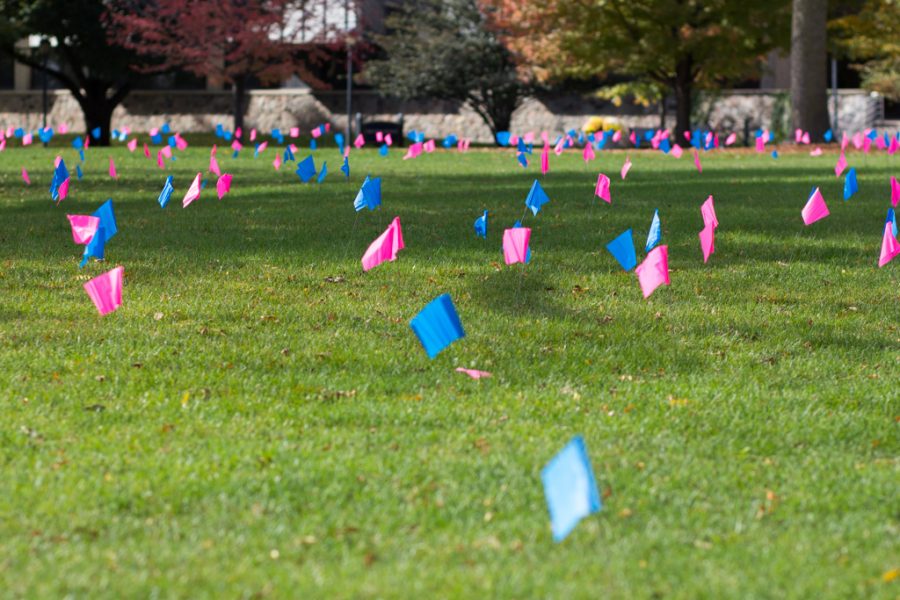 Marquette For Life's Memorial for the Unborn was displayed last week outside of Lalumiere for pro-life advocacy week.

Podcast by Nicholas Cordonnier
The student organization Marquette for Life hosts a week’s worth of events every year advocating for the pro-life movement on campus. The events entail cupcake sales, speakers, a candlelit vigil and a “Memorial of the Unborn” in the Central Mall.

In past years, the memorial has been a subject of controversy, and last year it was protested and vandalized in an incident rumored to be associated with Marquette Empowerment, an intersectional feminist club focused on alleviating oppression and prejudice facing a variety of minority groups.

The vandalism was done by individuals who were not involved with Empowerment, but members of Empowerment acting as independent citizens, said Tess Bridges, Empowerment executive board member and senior in the College of Arts & Sciences.

Empowerment is looking to do things differently this year by challenging the event in nonphysical ways. The two advocacy groups are attempting to work together and hunt for ways to avoid the controversy that has plagued the event in years prior.

“This year we decided instead of knocking things down and doing a physical demonstration, that we (explain) we want dialogue, we want to change this, this is our mission, and this is why it’s wrong,” Emmy Heeney, an executive board member of Empowerment and senior in the College of Nursing, said.

Members of the Marquette for Life executive board, however, said they feel that those personally affected by abortion can benefit from the public display.

“The purpose of the memorial is to bring attention to the magnitude of the tragedy of abortion within our culture and provide healing for all those individuals who have been personally affected by abortion,” a statement from Marquette for Life executive board members said. “For those of us that may be saddened or uncomfortable because of this memorial, Marquette for Life has worked diligently to provide contact information for post-abortive support, counseling and healing resources.”

“See the reality of abortion in the United States. Let’s judge or prayerfully reflect on it. Based on that, what’s a loving response? Dialogue is that loving response,” Blaha said.

Much controversy over the memorial stems from the risk of community members affected by early termination of a pregnancy being forced to relive the experience, Bridges and Heeney said. They feel the memorial doesn’t effectively create a dialogue.

“It would be different if they hosted any type of event where students could dialogue. I’m totally comfortable with them trying to convince students to be pro-life through conversation, but through this public display they’re just isolating (people of other opinions),” Heeney said.“Faculty, community members and students don’t feel comfortable walking on campus, and that shouldn’t be the fact.”

In Marquette for Life and Empowerment’s effort to create a dialogue with one another, they have been meeting with each other off and on since the beginning of the school year.

“We suggested having something on the grounds of the Joan of Arc Chapel because it’s a separate, Christian space.

While the clubs haven’t yet come to any compromise nor do they currently have plans to collaborate with one another on a project, Blaha said that possibility isn’t off the table.

“(The meetings are) a sign that dialogue is happening,” Blaha said. “I personally believe when dialogue and real respect for each other comes forth, new creative things can emerge.”