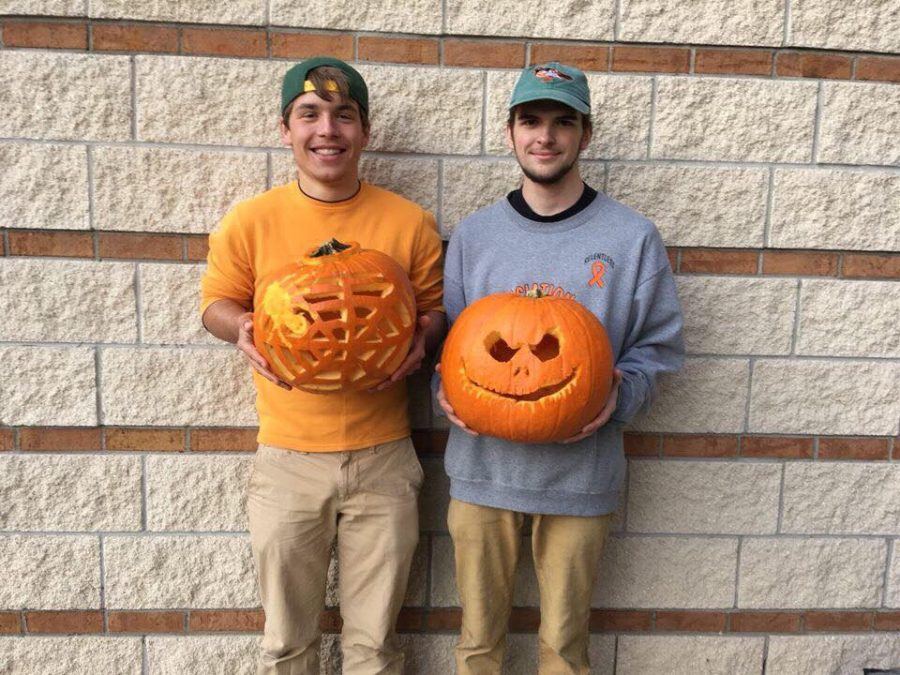 Assistant A&E editors, Mackane Vogel and Nathan DeSutter, competed in a pumpkin challenge. Round one was a carving contest. Round two was a pumpkin painting contest. Twitter polls on Marquette Wire and Marquette Wire Arts social media pages, decided who won each phase of the competition. For round three, they threw their pumpkins across Schroeder Field, and whoever threw them the farthest won. 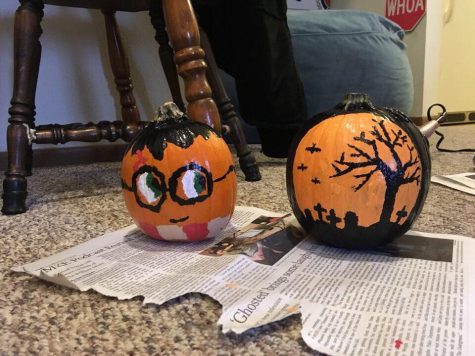 Coming into this challenge, I figured all I had to do was beat DeSutter in the throwing portion of the event. I was confident that I would win either the painting or the carving, so I knew that the throwing might end up being the deciding factor.

Carving was the first task. DeSutter, to no surprise, had an elaborate stencil drawn out with a spider and a web that he planned to pierce into his pumpkin. I decided what I was going to carve about ten seconds before I made the first incision. I ended up using a classic face carving. More specifically, I carved Jack Skellington from “The Nightmare Before Christmas.”

It was a lot more challenging than I anticipated. Skellington’s mouth has a lot of details, with tick marks all along his wide, ear-to-ear grin, which proved to be difficult to carve. I finished nearly 20 minutes before Desutter, whose pumpkin looked like Swiss cheese. I felt my pumpkin was a lot better than his.

I’m by no means an expert pumpkin carver. Last year was the first time I’d ever seriously tried to carve a pumpkin, but I was confident heading into the pumpkin carving, painting and chucking competition with Vogel and thought that I could easily come out victorious.

First of all, I knew I had the throwing part in the bag. Though Vogel said he played high school baseball, I did too, and I figured my stockier frame would give me an advantage over him. Then, all I had to do was win either the painting or the carving. Since I won some 4-H awards for painting in high school and took some projects to the state fair, I figured the painting was in the bag as well.

Round one, pumpkin carving, was held outside my apartment on a confusingly warm October day, and mid-way through the round, I was sweating for multiple reasons. Mainly, I was afraid my spider web design was too intricate for my novice pumpkin carving skills. This was a design I found on the internet, stenciled onto a piece of paper and thought I could replicate, but I started to doubt myself.

Luckily, I was able to craft a solid spider web alongside a spider I carved into the side of the pumpkin for an impressive design that the audience heavily favored in the Twitter poll.

When we painted the pumpkins, we had unique ideas. I stuck with my theme of character faces and painted a Harry Potter pumpkin. DeSutter opted to paint most of his pumpkin black, and then detailed a haunted graveyard scene on the remaining orange portion.

Even though I will admit it looked very nice, but there is one crucial outside factor. While painting, we were both using sponge brushes. I asked if DeSutter had any thinner brushes for details. He told me that he did not have any other brushes. I shrugged and struggled to paint Potter’s glasses because of the thick brush.

I finished the pumpkin long before DeSutter. Then I looked over and saw him using a thin brush to paint delicate little bats into his graveyard scene. DeSutter later admitted he meant no foul play, but he stuck by his original statement saying that he truly did not have any other brush. He only had one, and he did not want me to use a color other than black because it was the only detail brush he owned. This made a sense; however, I still feel I had a slight disadvantage. 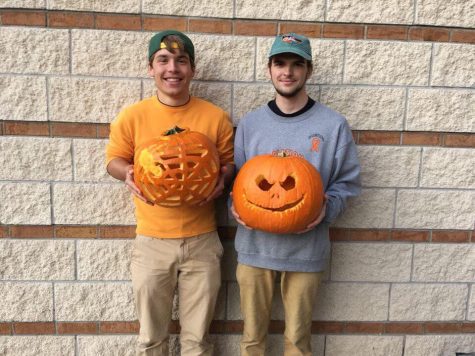 Round two, pumpkin painting, went similarly. I took on a design that I wasn’t quite sure I would be able to replicate on such a small surface. It was a haunted graveyard silhouette scene painted against a bright orange moon that was encased in a

circular, pitch black night sky. I thought this would be especially difficult, because I only had large sponge brushes to work with. That’s when I remembered I had a smaller brush stowed away in the cabinet from a project last spring. I grabbed it and got to work doing some more intricate designs.

Unknowingly, this enraged Vogel. It wasn’t meant as a method of cheating or taking the upper hand, but it was viewed that way by some. He wanted to use the same detailing brush, but I didn’t want him using it and mixing colors that I had no intention to use. Regardless, my pumpkin dominated on Twitter which closed the book on this competition and gave me my third straight Mack versus Nate win.

We headed over to Schroeder Field to partake in some Pumpkin Shotput. We threw our large and small pumpkins. Distance would determine the victor. DeSutter’s carved pumpkin gave him an advantage in the first throw, since half of the pumpkin had rotted away because of how much he carved out. Therefore, the wind resistance worked in his favor, and he beat my large pumpkin throw by quite a bit. The small pumpkin throw was so close that we had to look at the video in slow motion before determining that DeSutter had beaten me by a hair.

Unfortunately, I again fell short in this challenge. But the year is young, and there are many challenges we have yet to face. I am confident I will get on the scoreboard soon and start to gain some ground.

Round three was probably the most insane thing we’ve done all year. Plus, the amount of stares we got while throwing pumpkins across Schroeder field was absurd. But it was hilariously fun.

The first throw was a discus-style heave that ended in my pumpkin shattering into what seemed like a million pieces, just surpassing Vogel’s throw. I had a bit of an advantage considering my pumpkin had a lot of holes in it, and therefore, was aerodynamic.

The second throw was more of a baseball style throw. I had a disadvantage in this round because my pumpkin felt like a large softball as opposed to Vogel’s which was more like a baseball. However, I beat him by a hair and swept the competition in straight sets 3-0.

Overall, I moved to 3-0 in challenges and 7-2 in overall rounds of competition. Mack versus Nate is all Nate right now.