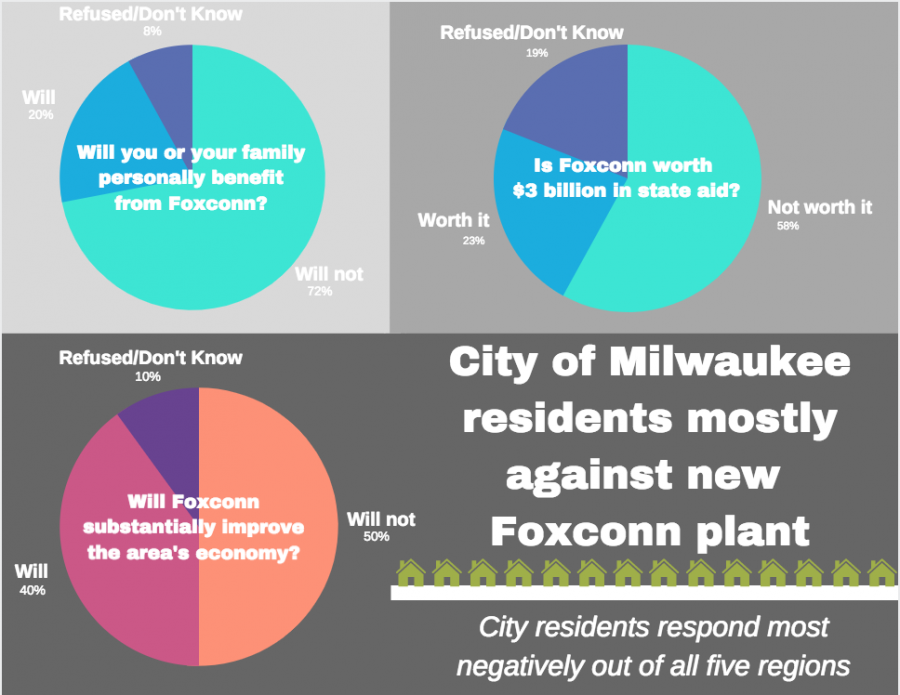 Residents of the Milwaukee area are divided on perceived impacts of Foxconn Technology Group’s impending Racine County plant, according to a recent poll by Marquette University Law School.

While 54 percent of respondents in five Milwaukee area regions – Milwaukee, Ozaukee, Racine, Washington and Waukesha counties – said they believe Foxconn will substantially improve the area’s economy, 48 percent said Foxconn is not worth the $3 billion received in state aid.

“I don’t see these two as necessarily contradictory,” said Charles Franklin, director of the Law School Poll and professor of law and public policy. “It seems to me you can certainly believe that this very large plant is going to help the region’s economy and yet, at the same time, believe that the returns to the state government over time will not be worth the $3 billion that we’re paying for it.”

The poll also reported that 65 percent of respondents said neither themselves nor their families will personally benefit from the new Foxconn plant. In the city of Milwaukee specifically, that number jumped to 72 percent.

“Some of Marquette’s engineering graduates might benefit tremendously if they get engineering jobs at the plant,” Franklin said. “But unemployed people up the street might not benefit, depending on whether Foxconn is hiring the kinds of jobs that less-skilled workers can get.”

Across the board, the city of Milwaukee had more negative responses than any other region: 50 percent said Foxconn will not substantially improve the economy.

“(One reason for this is) certainly the economic differences between the wealthier suburban regions, where it seems there’s a lot of optimism about Foxconn, versus the more economically stressed areas of the city,” Franklin said.

Franklin added that partisan differences between the city and suburbs could explain the divide.

“A perfectly plausible alternative is that it’s less people’s financial situations and financial impact and more just our good-old-fashioned partisan polarization in views,” he said.

Both these reasons — economic factors and political affiliations — are plausible explanations.

“Undoubtedly, it’s a mix of both those things, but which one is dominant I think is a somewhat open question,” Franklin said.

While the city of Milwaukee was an outlier in the data, Franklin said Milwaukee data cannot be directly applied to the attitudes of Marquette faculty, staff and students.

“I think that’s pushing it a little too hard,” he said.

Brian Dorrington, senior director of university communication, echoed the same thought. “(The poll’s) findings should not be misconstrued with the views of Marquette’s administration,” he said in an email.

Dorrington said Marquette’s administration are optimistic about Foxconn’s potential to generate a regional economic boost and opportunities for students.

“This week on our campus, nearly 50 Marquette students had preliminary interviews for jobs, co-ops or internships with Foxconn,” he said. “We believe that is just the beginning in terms of the opportunities Marquette students will have to build their careers through Foxconn.”

Wisconsin’s educational institutions were a drawing force, the company wrote in a statement. “In addition to its traditional strengths in manufacturing and the strong work ethic and culture, Wisconsin also offers a very strong education system and that will be critical as we seek to recruit and retain talented employees,” the statement said.

Franklin said the poll’s results were in the ballpark of what he expected.

“I’m not surprised, but I think it’s interesting that the nuance between economic advantage versus worth-the-cost turns out the way it does,” he said. “I think our data show those two sides of it … In that ambiguity, I think that kind of reflects what I perceive as the public reaction.”

Although Franklin said the Wisconsin Economic Development Corporation is holding up the Foxconn contract and has not been forthcoming about the reason why, he said the deal is effectively done, and the poll will probably not affect decision-makers in a significant way.

Dorrington said support for Foxconn could increase in future years. “(A sales tax for Miller Park) was a very contentious issue at the time. Today, 68 percent of respondents believe it was worthwhile,” he said. “We believe that in time, people across our region will view Foxconn in the same way.”

Franklin said future public opinion regarding Foxconn could go in either direction, and which way is uncertain.

“Supporters and opponents act as if they know for sure how this is going to turn out,” he said. “This could be a good idea and could benefit us, but we’re really not sure if it’s really ultimately going to be worth it. In that that very ambivalence, I actually think is a more reasonable picture of what we truly know and especially don’t know about how this is going to work out over five or 10 or 20 years.”