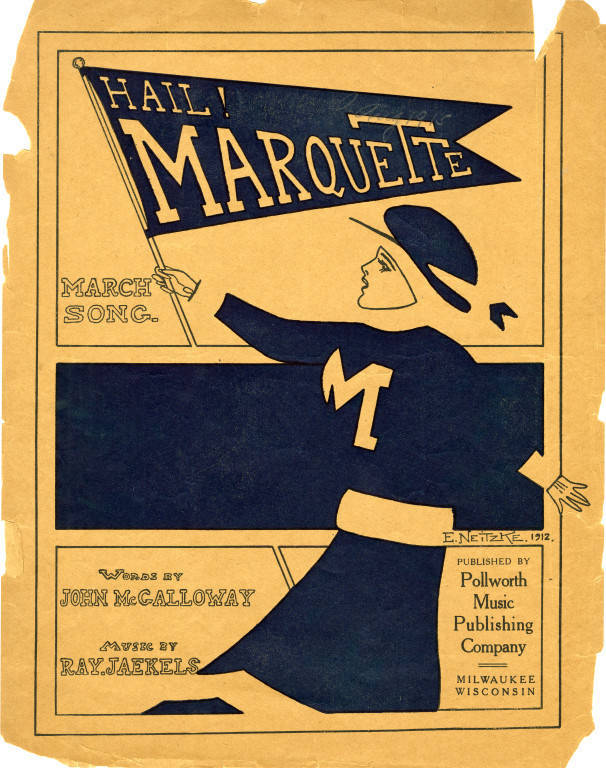 School spirit is an integral part of Marquette culture. Over the years, there have been some exciting school sports moments, and those who were in attendance will always remember the atmosphere. Whether it was the NCAA championship in 1977, or the take down of Villanova in the 2016-’17 season, nearly every Marquette student and alum can recall an unforgettable day relating to school spirit.

But what makes these moments so special is more than just the friends nearby and the athletes on the court or field — it’s the traditions. Here’s a look at some of Marquette’s oldest songs, marches and chants.

This was one of the very first songs to be performed by Marquette’s band, just after it formed in 1924. John Phillip Sousa, a well-known and esteemed American composer, dedicated the march to Marquette as his band. Then the brand new music group played at Sousa’s annual Milwaukee Concert in the Milwaukee Auditorium. This collaboration with Sousa gave the Marquette band instant credibility in their first year of existence. The Marquette band later went on to be one of the first to  broadcast their music live over the radio, under the leadership of Director Herman Zeitz in 1927.

While Marquette’s mascot has shifted from the Warriors to the Golden Eagles, the football team went by the “Golden Avalanche.” The team had several successful years throughout their existence before being terminated in 1960, and the song “Roll on Old Avalanche” was coined in 1930 to support the program. Students would sing the song at football games, much like the well known “Ring Out Ahoya” at basketball games.

Perhaps the most well-known and historic song of all, “Ring Out Ahoya” has been an MU tradition for ages. The song is played at every home basketball game, and this has been the case since before 1920. The song is carried by students singing loudly and proudly. It is a song that is especially prideful for Catholic students, as the term “hoya” is often used in the Bible and other Catholic scriptures. Some people have taken the “Ring Out Ahoya” tradition to a new level, however. In a 1986 edition of the Milwaukee Journal Sentinel, an article appeared about a mother singing “Ring Out Ahoya” to her baby right when she was born. The woman was quoted saying that the first time she felt her baby kick was while she was at Marquette band practice, rehearsing the song.

In the 1920’s every student received a handbook at the beginning of each semester. These handbooks included typical subjects such as academic probation information and graduation requirements. But the handbooks also had two pages dedicated to songs and chants. Every student was expected to know the lyrics and the words to these. The university anthem did not have the most creative lyrics. “Hail Alma Mater, thy sons do call. We’re here to greet thee dearest friends to all. We’re here to show thee, our love is strong. Hail, Alma Mater! Marquette hear our song!” The lyrics have been rearranged over the years to fit the language better and to make more sense, but the core is still the same. And the Marquette fight song, which had specific football lyrics, was also included in the handbook. This song’s lyrics were all about the strength of the Golden Avalanche, however part of the lyrics were often made fun of because of the football team’s decline in talent toward the end of the program. “Rip that line and plunge right through, touchdowns, touchdowns, just a few!” While at the time this probably seemed great, by the end of the football program it only made things worse.

While some traditions fade away, others will never die. It seems safe to say that Marquette will never stop ringing out ahoya. But perhaps a new song will emerge, and perhaps someday the Golden Avalanche will be resurrected, only this time, with a better fight song.