Salvaging pieces of the past 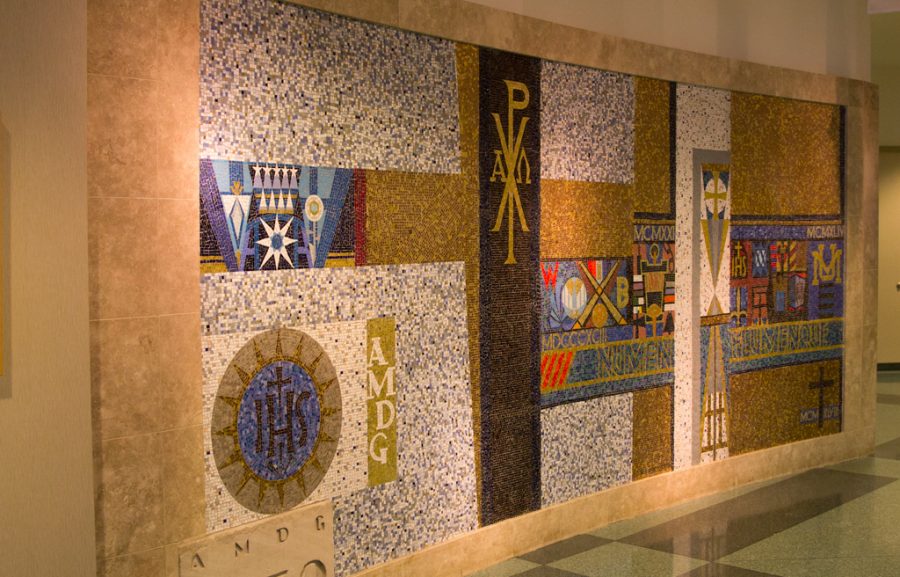 Pieces of the old Jesuit Residence make up the inside of the new building.

From top to bottom, the Jesuit Residence is full of history – all in the form of reused materials.

The former Jesuit Residence, which was located in the 1400 block of West Wisconsin Avenue, was demolished late in August 2016. The new residence opened before then, with the Jesuits settling at the West Wells Street location around Oct. 20, 2015.

The aura of the former residence can be seen and felt throughout the new facility, with a contrast of modern architecture and traditional decorations.

In the lobby of the new residence sits a lit-up window box containing stained glass windows from the original Johnston Hall chapel. The same boxes can be found in the first-floor living room and chapel. A larger display is hidden away in a small room on the fifth floor, a place restricted from student access.

“It had the library, the chapel, the administration, the classrooms, and the Jesuits lived on the top floor,” he said. “Those were brought with us, we put them in these light boxes and all the light boxes were redone when we moved into this house.”

Zagone said Rev. Francis Paul Prucha, who stayed at Marquette for 50 years and died in 2015, was insistent on keeping the original Johnston Hall stained glass windows.

“That’s kind of how we keep people alive – is by hanging onto the things that remind us of them,” Zagone said.

Another feature of the Jesuit Residence lies just outside the first floor. The Stuessi Garden, named after a Marquette alumna who established the garden at the former Jes Res in 1990, has features from its previous life on Wisconsin Avenue.

Many stones, including those surrounding the outdoor fountain, were brought over from the former garden. A gargoyle that used to sit by a side door of the former Jes Res is now featured next to the fountain.

The two gargoyles that previously adorned the front of the former residence will likely be put together to form a bench, Zagone said.

Furniture from the previous location is used in almost every room – couches, tables, paintings, statues and more. The one exception is the chapel off of the lobby, which has new seating.

Despite this minor update, the chapel keeps up with the residence’s trend of resourcefulness with its reuse of old marble from the previous altar, along with the tabernacle, lectern and candles.

“Some of this is related to using what you have instead of buying new – a resourceful Jesuit trait,” Lora Strigens, the university’s vice president for planning and strategy, said in an email.

The mailboxes are another feature with a recycled story. Even though the metal mailboxes from the previous residence were replaced with wooden ones in the new house, Zagone said the metal mailboxes found a different kind of use. “Someone took the entire bank and made a headboard for a bed,” he said.

Zagone also mentioned that the Jesuit Residence has remnants of O’Hara Hall, which used to stand behind Sensenbrenner Hall and was demolished in 2010. Bricks from the old building have been incorporated into the basement of the residence, and a door and exit light from the president’s office have also been reused.

The dining room, also on the first floor, has yet another touch of the past: Stained glass panes from the Biltmore Apartment Hotel, which used to occupy space where Raynor Library stands now. Zagone said Janet Gottfreid, who was a project manager in the Office of the University Architect and died in 2013, found the panes in an antique shop.

Zagone said it was also Gottfreid’s idea to save a mosaic from the Brooks Memorial Union, which used to stand south of the Biltmore Apartment Hotel. The old union was replaced by the Alumni Memorial Union in 1990 and demolished in 2001.

Items not reused in the new Jesuit Residence were preserved in other ways. “We are also active in working with organizations like Habitat for Humanity on salvage efforts,” Strigens said in an email. “This was done most recently on the old Jesuit Residence and on the Academic Support Building (where Wild Commons is now under construction).”

Zagone said the traces of old campus buildings throughout the new Jesuit Residence, and throughout campus, is a necessary recognition of the past. He said they want to maintain their tradition of being a Catholic Jesuit school, as well as telling a story of where they have been.

“Part of our Jesuit mission is being good stewards of the world that God created, and that includes ecology and environmental issues,” Zagone said.

With another demolition coming up – McCormick Hall, as early as fall 2018 – the university archivists plan to document the event.

“We recognize that this is a monumental occasion on campus,” Amy Cary, head of special collections and university archives, said. “McCormick has been a huge part of student life, … What we’ll try to do is look for the student perspective.”

Judging by the Jesuit trend of reusing old materials, future students may one day pass by pieces of McCormick in unexpected places as they make their way to class.