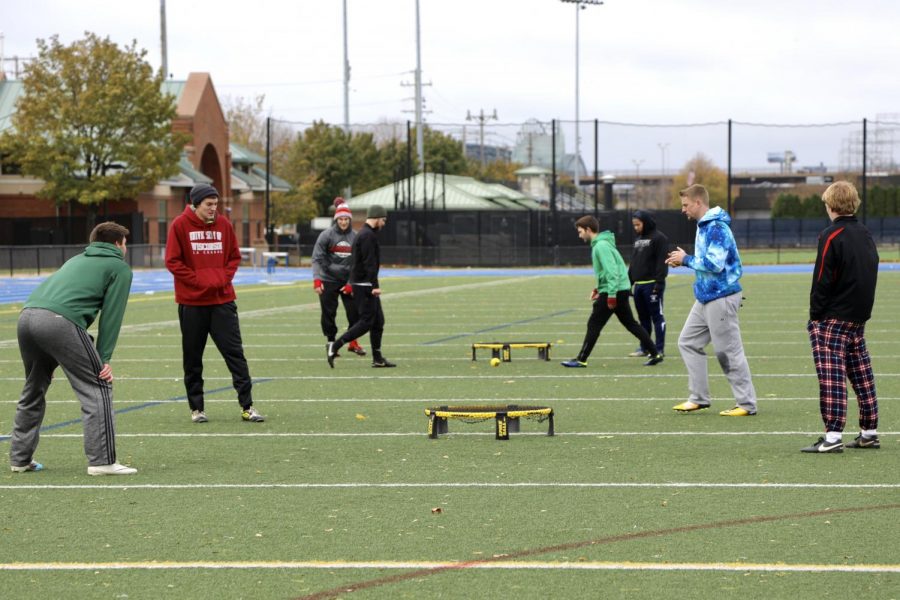 Teams from around Milwaukee compete in Marquette's inaugural spikeball tournament at Valley Fields.

As a powerful, freezing wind howled over Valley Fields, repeatedly lashing the flat terrain, a dozen competitors huddled in heavy sweatshirts and winter hats stood around groups of nets that look like miniature trampolines, repeatedly bouncing balls off them.

It’s not the usual setting for Marquette’s newest club sport, but local enthusiast Ryan Pierron plays no matter the conditions.

“I actually don’t mind (the cold),” Pierron said. “As long as you bundle up and you’ve got the gloves on, you’re good.”

Spikeball, also known as “roundnet,” is typically played by four people on two-person teams. The server stands six feet back from a net and spikes it. The goal is to hit it so the other team cannot return it. Each team has three hits to get the ball back onto the net. Whichever team hits 21 points first wins.

Club founder Josh Schneider first learned about the sport at a family barbecue two years ago when his brother-in-law brought a net to a family barbeque.

“We just played it in the backyard for a year or two,” Schneider said.

Since then, Schneider has taken spikeball on a journey from the backyard of his Grayslake, Illinois home to Marquette’s Westowne Square for pickup games and finally, this year, to a fully-sanctioned club that has already hosted its first tournament.

The skills required to be good at sports in general are also important for spikeball play: hand-eye coordination, nimble feet and great reaction time.

“Whenever somebody’s serving, you’ve got to have a really quick reaction to get the ball,” said Joshua Grohs, one of spikeball club’s inaugural members. “You’ve got to be thinking about the next play and what you’re going to do. It’s not something you can play without thinking. You have to have a lot of mental strength.”

Schneider introduced the game to Grohs, who quickly took to playing it regularly, He now practices with the team Tuesdays and Fridays for two hours apiece.

“We just really like to play,” Grohs said. “There are no drills or anything; we just really want guys to have fun. That’s the most important part about spikeball.”

Although there’s plenty of fun to be had with spikeball, preparing for Marquette’s first officially-sanctioned tournament at Valley Fields involved a surprising amount of hassle, according to Schneider. Reaching out to sponsors, contacting other teams and arranging all the equipment was a painstaking task.

This is not the first tournament Schneider hosted. For the last two years, Schneider held a fundraiser tournament in Grayslake to benefit Oasis for Orphans, a program that assists orphans in Kenya with living situations and social development. Last summer’s tournament attracted 53 teams and raised just over $3,000.

While the Marquette tournament didn’t have a community service component, it shared some similarities with Schneider’s home tournament. All teams were welcome, even those not affiliated with a college. There wasn’t any skill level requirement to enter either tournament. Four of the 53 team-field that attended Schneider’s gathering had never played the game before, and several teams in the Marquette tourney were novices.

There’s one key difference between the two events: The Grayslake tournament’s Marquette connection is limited to Schneider and his close friends. The Marquette tournament, on the other hand, was a shared experience for all 10 or so regulars in the club, a figure Grohs hopes grows larger by the time Marquette hosts its next one.

“This one’s going to be more special because it’s our tournament,” Grohs said. “As a Marquette spikeball club now, it’s kind of good to get more Marquette people involved.”

Not everything went off flawlessly, though, as Schneider found it difficult to attract the number of teams he was hoping to get. Only five teams showed up to Valley Fields for the tournament. Availability in the middle of a semester was partly to blame for the problem, particularly with teams that would have to travel a long way. The other problem? Spikeball isn’t really a fall sport.

“It’s a late October tournament, so it’s not going to be necessarily the warmest,” Schneider said. “Everybody’s going to be like, ‘Oh, it’s 40 degrees in the morning. Why would I want to do that?’”

About a dozen people braved the bone-chilling, blustery conditions to play spikeball under a drab Milwaukee sky, not all of them from Marquette. Pierron, a varsity tennis coach who lives in Shorewood, Wisconsin, starting playing spikeball at Bradford Beach and quickly became an enthusiast.

“I saw someone playing and it looked like a lot of fun,” Pierron said. “I purchased my own set at 2:30 that morning.”

Going forward, Schneider is focused on the big picture. He hopes the club gains not just members, but devotees; people that are willing to commit to the twice-per-week practices and occasional events. Attending tournaments at other schools will also be a priority in the near future.

“I just want our club to get better and better,” Schneider said. “That way, we’re really known in the spikeball community.”