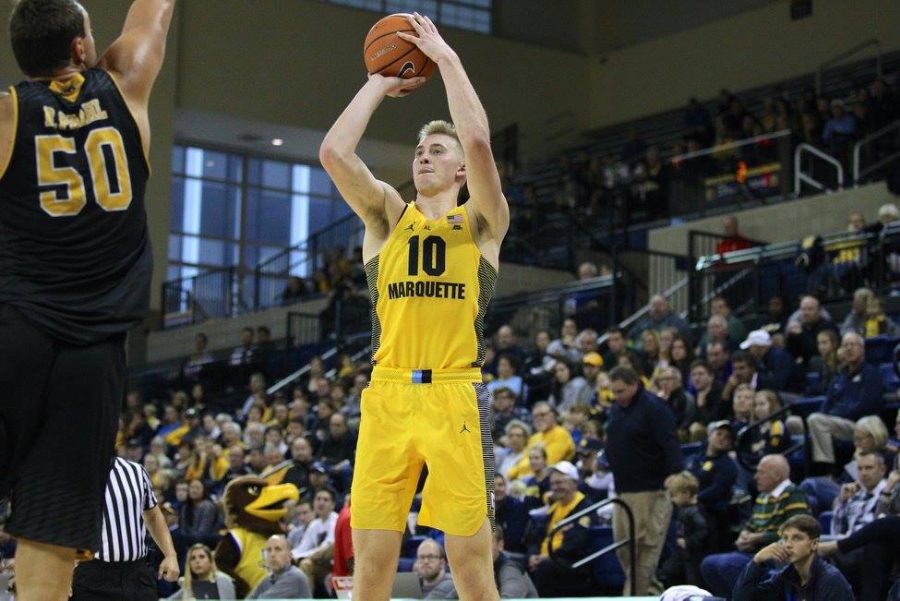 Sam Hauser had 27 points and 10 rebounds to guide Marquette to a 78-63 victory over UWM.

Going into the season, head coach Steve Wojciechowski wanted Hauser to do a little bit of everything this year, including pick up some rebounding slack.

“He is a real key guy for us,” Wojo said. “Last year he could kind of play off others. This year we need him to be real aggressive.”

The 6-foot-6 forward’s team-high 10 rebounds was a bit of an unfamiliar site after averaging just five rebounds per game last year.

“Coaches really preached that to me this year,” Hauser said. “I kind of pride myself on that.”

Hauser was not the only one to notice a bump in rebounding. After being out-rebounded in 10 of the team’s 18 BIG EAST contests last year, Marquette did likewise to UW-Milwaukee by a comfortable 44-28 margin. Wojo attributed the success on the boards to freshmen Theo John and Ike Eke.

“Just by adding Theo John to the roster, it’s a lot more size,” Wojo said. “Those guys are really green but they do add size and athleticism.”

Marquette came out of the gates slow, failing to take the lead until the 9:17 mark in the first half, when Hauser scored Marquette’s second two-pointer of the game. Turnovers were the main reason for the slow start; Marquette committed 10 first-half turnovers. Wojo said his team’s goal should be 10 turnovers per game.

“We were turning the ball over like crazy,” Wojo said. “That’s something we can’t do.”

After the team’s lethargic start, the Marquette built a narrow five-point lead at halftime and expanded its lead into double-digits for most of the second half.

The Panthers dented Marquette’s lead late in the second half, cutting it to 10 with 12:42 remaining, but a pair of Hauser free throws sparked an 8-3 run. Much of the Panthers’ success came from forward Brett Prahl, who led UWM with 15 points and six rebounds.

Marquette has never lost to UWM in program history, owning a 39-0 series advantage. Marquette won by at least 20 points in four of the last six regular season meetings.

Sunday’s scrimmage raised over $30,000 for the American Red Cross.

“It’s awesome,” Hauser said. “Anything we can do to help is great because they need it right now.”

Marquette will host Northwestern for a closed scrimmage Thursday and Lindenwood for another exhibition Nov. 5 before starting regular season play.