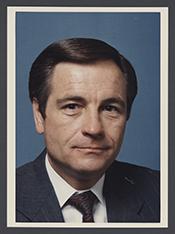 Photo via congress.gov Gerald 'Jerry' Kleczka, a Milwaukee native who was a U.S. Congressman for Wisconsin's fourth district from 1984-2005, passed away Oct. 8 in Madison at the age of 73.

Raised on Milwaukee’s South Side, Kleczka was a Democratic member of the U.S. House of Representatives, serving from 1984 to 2005. He represented Wisconsin’s fourth congressional district.

In 2002, Kleczka began the Kleczka Program, which is the local version of the Les Aspin Center in Washington, D.C., which gives students the opportunity to work in legislative offices. The Kleczka Program designed for students who are interested in public policy but want to stay local.

“The congressman knew the value of internships, but since most of them are not paid, he was concerned that lower-income students could not afford to take advantage of such opportunities,” Hoffman said.

Hoffman said that thanks to Kleczka’s generous gift, eligible students can receive a stipend for the program.

Grecia Rodriguez, a junior in the College of Arts & Sciences, participated in the Kleczka program by interning in the Milwaukee Justice Center. Her duties included helping clients fill out paperwork involving custody, divorce and other stipulations.

Rodriguez saw firsthand the simple difference she could make in people’s lives and realized that there is a lot of work to be done in Milwaukee. Rodriguez said she plans to go to law school to aid people in difficult situations.

She said Kleczka’s legacy is embodied in the work and service the interns provide.

“I think it is incredible that the congressman always knew that there was work to be done in Milwaukee and that’s why he fought so vigorously for his constituents,” Rodriguez said. “His work ethic has truly inspired many, like myself, and I hope many more students are encouraged to participate in the Kleczka program.”

Marina Dimitrijevic is an alumna of the Les Aspin Program, who worked in Congressman Kleczka’s office while interning. She said the program helped her discover what she was passionate about.

“It was a life-changing experience for me and where I fell in love with politics and public office,” Dimitrijevic said.

After graduating from Marquette in 2003, she went on to create an internship program during her time as chairwoman of the Milwaukee County Board.

Dimitrijevic, who currently serves as the Milwaukee County supervisor and executive director of the Wisconsin Working Families Party, said she had the honor of knowing Kleczka personally. Dimitrijevic is currently a visiting assistant professor at the graduate school in public service administration.

“Jerry was a great inspiration, as he was a Southsider like me, and taught me as an elected official to always put your constituents first and it will take you a long way in your career,” said Dimitrijevic.