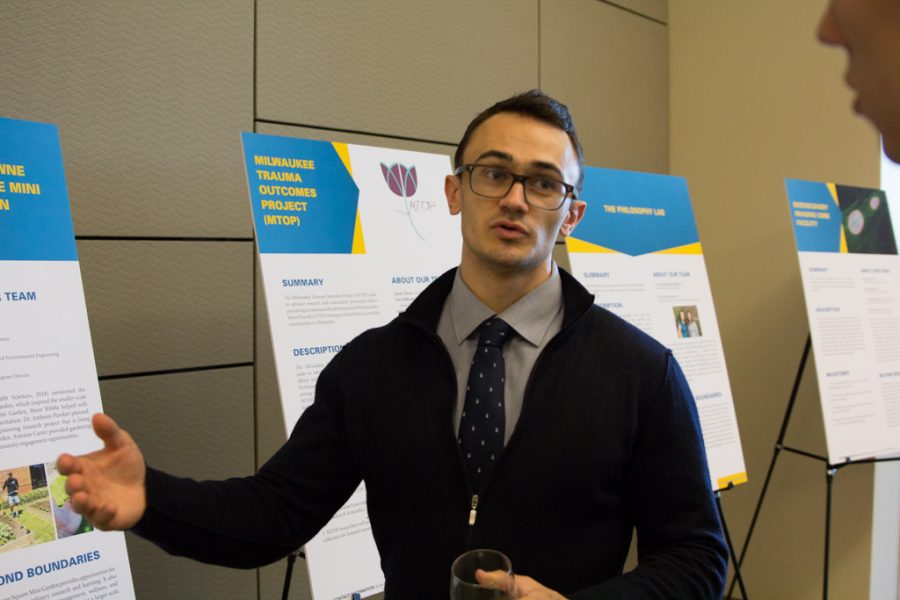 Aidan Flanagan, a senior in the College of Health Sciences, created the Westowne Square Mini Garden, a 2017 SIF awardee, as a response to the rate of homelessness in downtown Milwaukee.

Kewaunee County has a poop problem, according to Jill Birren, an assistant professor in the College of Education.

Her team has been working to help the citizens of the rural Wisconsin county north of Milwaukee. It is a largely agricultural community, which has presented them with a unique problem.

Her team is one of eight awardees of the 2017 Strategic Innovation Fund, which hosted its annual kickoff event last Tuesday.

The Strategic Innovation Fund is one of several entrepreneurship, research and development funds offered at Marquette. The fund is designed to provide seed money to students, staff and faculty to explore entrepreneurial ventures, according to the SIF website.

Birren and her team are working with local activists, who recently filed a lawsuit against the EPA in hopes of forcing the Wisconsin DNR to begin regulating the local water quality in Kewaunee County.

In addition to political work, the team is performing scientific research in the hope of helping the finding a solution for the problem. Birren says the team hopes to continue to fight for the health of those in Kewaunee County.

According to Birren, farmers in Kewaunee County have more manure than they are able to reuse. This excess builds up pathogens which ultimately are carried away when it rains, causing contaminated well water.

“My long-term goals are to continue to offer understanding and a voice for people who are fighting for their own health and the health of their own community,” Birren said.

Benjamin Zellmer, a senior in the College of Health Sciences and founder of MUnchmates, a 2016 SIF awardee, is looking to impact a more local community.

“That upperclassman mentorship that I had (as an underclassman) was really formative for who I became, and I wanted to spread that to the students who may not be connected to a lot of upperclassmen but have guest swipes,” Zellmer said.

MUnchmates currently utilizes an application called Yammer that works with Marquette’s email system, but Zellmer hopes to expand it to a mobile app by next spring.

“MUnchmates is a movement of inclusion,” Zellmer said. “It’s really trying to reach out to the 24 percent of students that seriously consider leaving Marquette.”

Aidan Flanagan, a senior in the College of Health Sciences and 2017 SIF awardee, created the Westowne Square Mini Garden as a response to the rate of homelessness in downtown Milwaukee.

“While walking to and from class, I saw homeless people resting on the sidewalk, and I wondered how I could help make a difference,” Flanagan said.

The garden has grown since its conception, and currently has more than 30 stakeholders on the project, which is being used by faculty in the College of Engineering for research. Flanagan hopes that the garden can be used for more than just feeding the homeless.

“We’re trying to use the data on an international scale to promote ecological development,” Flanagan said.

The garden currently has two beds, but Flanagan plans on adding more next summer.