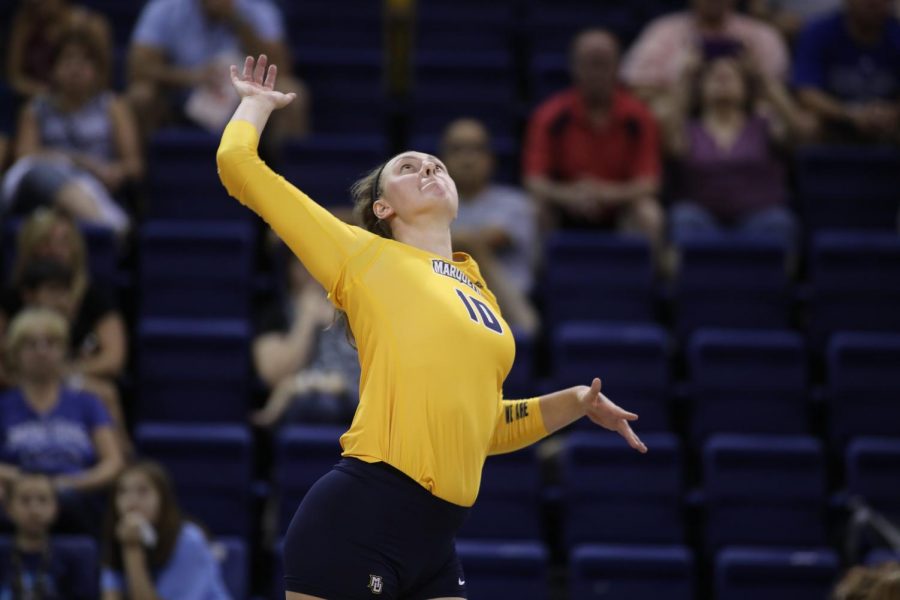 Sophomore outside hitter Allie Barber was brilliant as usual this weekend, delivering point after crucial point for the Golden Eagles. Everybody else, not so much.

Even the prelude to Marquette’s match against Butler was fraught with trouble. Despite coming in at 2-7 and on a five-match skid, the Musketeers played the Golden Eagles much closer than expected, especially in the third set. That’s when Xavier took a 20-15 lead on the Golden Eagles after a kill from outside hitter Laura Grossman, who finished the match with 12 of them. Marquette finished the match on a 10-3 run to prevent a fourth set.

Xavier dominated Marquette at the net; its 14 blocks were two shy of the BIG EAST season high for rejections in a three-set match. Barber’s 18 kills on 33 swings accounted for much of Marquette’s offensive production. Without her, the Golden Eagles’ hitting percentage would have dipped from .230 to .146. Nobody else on the team had more than 10 kills.

Marquette didn’t get other hitters involved against the Butler Bulldogs either. This time, the opponent was adept enough to take advantage. Butler withstood 66 Barber swings and a career-high 27 kills to take the victory in five. Middle blocker Bri Lilly smashed 17 kills and a .640 hitting percentage.

The match started much the same way Marquette’s first match against the Bulldogs did: with a fairly convincing victory in the first set. Butler hit .333 in the second set and closed it on a five-point run to tie the match heading into halftime. Butler staved off three straight match points to force a deuce in the third set. Although the Golden Eagles won that set 30-28, the Bulldogs convincingly seized sets four and five to take the victory.

The split weekend leaves Marquette at 15-7 overall and 9-2 in conference. It also pushes the Golden Eagles down to second in the conference after briefly snagging that spot from the Creighton Blue Jays earlier this month.

Next week, Marquette will travel east to face St. John’s and Seton Hall. A 2-0 weekend will be crucial to prevent the Golden Eagles from falling any further in the conference standings.